- April 03, 2011
Saturday really seemed like a normal school day because I was getting up at the normal time (5:20) and I my destination was Brunswick.  The only difference was getting 2 extra people up and ready before heading out the door.  Okay, really 3 extra people because normally I just put a jacket on Izzy and strap her in her seat and drop her off at daycare.  Adding Ward and Tucker into the mix was crazy!  My goal was to be in the car, driving away by 6:30.   When I looked at my watch as we were driving away, it read 6:32.  Not bad. We didn’t have to worry about dropping the kids off anywhere for the race because the race times were staggered enough and we had my dad, and Ward’s parents coming to watch.  Thank goodness for that!  All four of us were registered to run races yesterday.  Tucker and Izzy (I only registered her because I didn’t know if Ward was going to have to run with her to encourage Tucker or not) were registered for the Kid’s Fun Run, Ward was registered for the 1 mile, and I was registered or the half marathon.  Maybe someday, if the race coordinators continue with the race, our family will have representation in all the races held.  We were only missing out on the 5k.
When we drove into the base, old memories came flooding back.  I was not a Navy brat, but both of my parents worked as civilians on the base.  The last time I was on the base was for my mother’s funeral.  Bringing back that memory brought some (many) tears to my eyes.  What a way to start the day, huh? 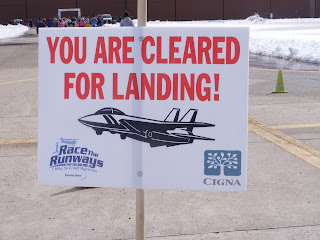 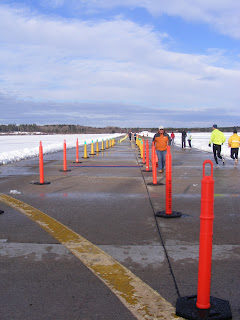 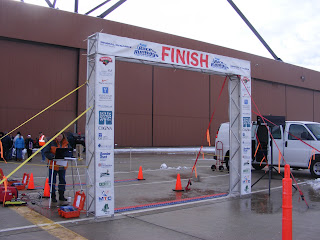 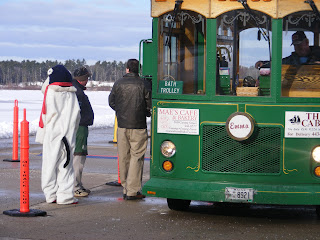 Our friend Jess also did the 1 mile and she was the women’s 1st place AND she walked away with $100!  Awesome! 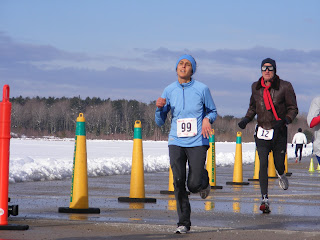 Half Marathon
Heading out to the starting line for the half marathon was a little crazy.   I didn’t realize how far it was.  We ended up jogging out there.  It got to be a bit chaotic because there was an intersection that lead to two possible starting points – 1 for the 5K and 1 for the half-marathon and absolutely no signage.
We figured out which starting point (the furthest one) to get to and jogged some more.  I hadn’t planned on warming up.  I figured I had 13.1 miles to warm up.  But I was definitely warm by the time we got out there.
When the gun went off and I got behind Mark and Christine.  We rounded our first corned and I lost them!  Why? Because the 5K started at the same time and for some reason, the race directors thought it would be a good idea to have the 5K and 13 mile runners merge.  It was absolutely crazy!  I had people bumping into me and cutting me off.  It was incredibly frustrating.  Then I saw the 1st mile marker and saw the time 7:13?  No way!  I was supposed to start off easy.  I looked at my Garmin and realized that this mile marker was not for me.  Then I saw the next mile marker – which WAS meant for the half marathoners.  Phew.  My real mile 1 was 8:13. 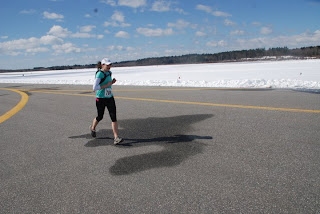 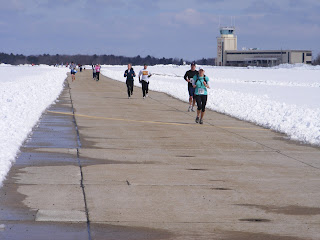 Overall, the course was nice and flat.  The wind was not so good.  At times, I was pretty warm – pushing my sleeves up all the way and other times I was pulling them down.  I did take my cheapo Target gloves off and put them into the bungie cords of my Camelbak, but I didn’t tuck them in enough and I lost them.  When I reached for them during really chilly part, I was a bit bummed.
I loved the two small parts where there were out & backs and I got to see my other running friends – Joe, Gene, Mark and Christine, Emilie, Jill, Stacy, John, and Karen. (Joe - I am so sorry, I haven't seen any pics of you yet! - I guess you were too fast for the photographers!)

I also got to see our school nurse’s 16 year old daughter, Katie, running with her boyfriend.  How cute is that?  This was her 1st half marathon and she completely rocked it – 1:34!  Woah!
I even got to see my principal for Harriet Beecher Stowe (my new school for next year) running! She just ran the Princess Half Marathon in February. Way to go Jean!
On the way back toward Hangar 5, I saw my dad standing there with his camera!  Thanks, Dad! 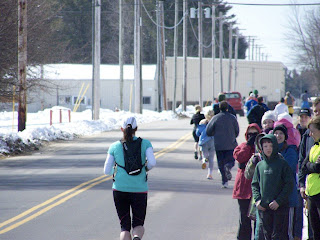 When I rounded the corner to head back onto the runways, I was met with a brutal wind.  I had to put my head down and push through it.  I seriously thought I was going to lose my hat!  Ward came running out to take some pictures, but didn’t get there in time (that’s okay, honey, the Maine Running Photos people were taking some great ones).
Then I finally rounded the last corner heading back to Hangar 5 and the wind was at my back.  Thank goodness for that.   Then I saw Ward again and he got some pics and then took my camelbak.   It was an incredible feeling coming into the finish line seeing my dad, mother-in-law holding a sleeping Izzy, father-in-law with Tucker and Jackson, brother-in-law & Scout, and friends Joe and Jess and their kids AND actually hearing the announcer say my name as I came in! 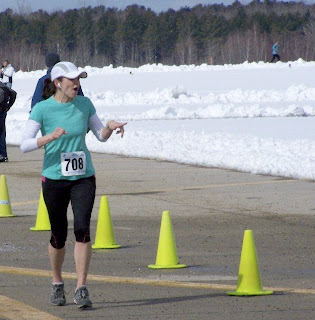 Kids Fun Run
Tucker did his 1st Fun Run.  Ward said it was a ½ mile.  I was so sad I missed it.  At least I had my dad and Ward taking pictures!!!
Tucker’s report on the race – “I loved it!  I kept up with the big kids!”
5K Pics of Friends!
Post Race

We hung out in Hangar 5 few a bit after the race – packing up our belongings, watching the kids run around like crazy, warm up, and to take more pictures of family and friends!

I must say that our group of friends is one that is very supportive.  Look at this group!  Scott & Dan - thanks for taking pics. 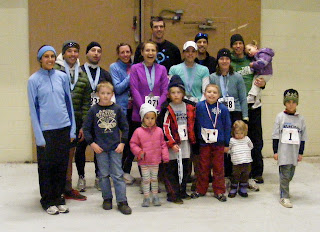 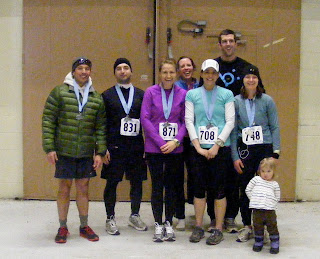 All in all, for it’s first year, and having 4 different races going on at the same time and nearly 900 runners, I think the Race the Runways went pretty well.  I really hope this race becomes an annual event!
friends half marathon PR Race the Runway Tucker Ward