- March 04, 2012
Yesterday was the third day of the March, photo of the day challenge.  I completely forgot to post them.  Perhaps I was too wound up from my vlog debut.

Here is it.  I took pictures of my neighborhood while on my soggy, slushy run yesterday. It's not technically "my" neighborhood, but it is my city.  Yes, as rural as these pics look, Gardiner is technically a city.  I did run in a neighborhood that I wanted to be mine.  Does that count?


It was snowing when I started the run and then it turned to sleet then ice.  It was definitely a wet run.  I parked in the Hannaford parking lot because I had to go there after the run anyway.

We had about 8ish inches dumped on us on Thursday and another 2 inches or so came Friday night, so the roads were definitely not clear.  I was actually hoping (praying) that the Rail Trail would be clear enough to get in a run there.  So I but on my yaktrax again.  I am loving the strap on these.  I know for sure they are not going anywhere! 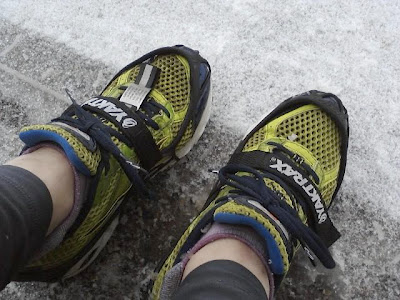 I walked over to the Rail Trail and made a very quick decision that today was not the day to run there.  Unfortunately it hadn't been plowed yet.  Very pretty, but I didn't wear my snowshoes. 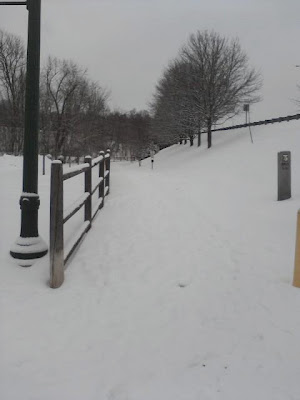 I did run into a running friend of mine (he was running down the middle of the street) when I first started and he suggested a route that he had just done and said the cars gave him plenty of room.  Apparently someone was in a bad mood because the first car I saw, I swear, aimed for the biggest puddle ever.  I knew I was going to get wet, but that was crazy! 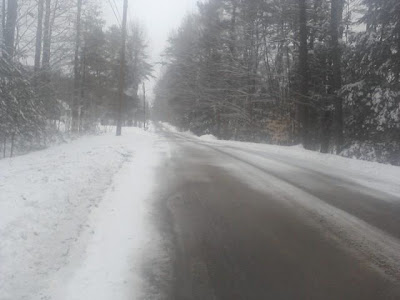 All in all, I loved being out there yesterday morning.  Well, not the splashing incident.  I got in 5.5 miles in about 50 minutes.  Not a speedy run at all but a nice challenge.

Right now I'm sipping my coffee and getting ready to eat some breakfast, the girls and I have a 13 miler planned in 1 hour.

photo of the day