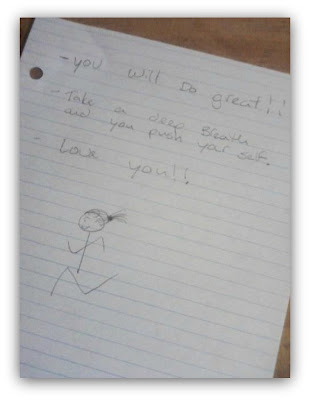 This is what I found on the kitchen counter, sitting beside my fuel stash,  on race morning.  My husband is the sweetest, ever.


Yesterday was my sixth half marathon and my second KRRT half marathon.  Jill and I were at the start bright and early and ready to rock.  I have issues.  Apparently, in my mind, it made perfect sense to pick Jill up at 6:30 (with the race starting at 7:30) for a 10 mile drive AND we had already picked up our bib #s the night before.  Jill knows me well and we waiting for me when I came around the corner.

When we got there, we finally got to meet Michelle from Average Girl Doing Average Things, a local blogger and fellow Tough Chik.  It was great to finally meet her in person.  I can't wait until we can meet again.

Eventually we headed over the starting line to get ready to run.  The race was supposed to start off with the firing of a musket, but after two misfires, the race director shouted go and we were off.

I felt great, so I went with it.  For about two seconds I was ahead of my running pal, Leslie.  Then she passed me like I was standing still, holding her iPhone up every so often to take pictures.  Now that's talent, people.   I tried like hell to keep her pace, but I lost her in no time.  Mile 1 split - 7:34.  Mistake #1.

Eventually I evened out the pace and felt great for the first 8ish miles.  I got to see Ward and my kids, then Wade and my niece and nephew, Stacy and her daughter, and then my dad at the turn-around.  The husbands also had a great plan in place - they went out the night before and bought ice and sponges so they could offer us the relief of something icy cool on the run.  They are THAT good.   I had love and support every few miles. Perfect. I know. Of course I'm smiling.

Just after I saw Stacy for the second time, I ate my favorite GU, peanut butter.  Within seconds, I felt sick to my stomach. (GU = Mistake #2)  I wasn't sure if I was going to throw up or poop my pants.  My rocking pace came to a halt.  To be sure, I made a pit stop in the woods.  I tried and tried, but I could only pee.  I guess that was good.  Side note:  I had passed a few port-a-potties at this point and the next one wasn't for another 4 miles.  To be honest, I know this trail very well and I am fairly confident that I know where the "good spots" are to go and relieve myself.  TMI, I know.

The pee stop helped a bit and I was able to trudge along for the next couple of miles until I came out of the wooded section and into the cute little town of Hallowell.  I was praying that Ward was going to be where he said he was going to be, with those glorious sponges.  When I saw him and the rest of the incredible support crew, I thought I was going to burst into tears and tell them to just take me away.  Somehow I held back the tears and instead of showing gratitude for their generosity, I blurted out some swears about crapping my pants.  Classy, I know.

I really wanted to eat that sponge.  I was so cold and felt heavenly.  The quick refresher helped me surge through survive the next 2 miles.   The plan was for me to hand off my camelbak to Ward at this point, but I didn't dare to do it.  I needed that water and quite frankly, I was surprised I had any left.

The final section was through another wooded section and I was thankful for some of the shade it offered.  I swear it felt like it was 100 degrees.  I continued to sip from my camelbak.   Knowing this course inside and out, helped quite a bit because I knew when to throw whatever I had left into high gear (which wasn't a whole lot but better than nothing) and get to that finish line.

I just wish there was a medal for this race.  I know, I know.  There wasn't one last year either and I shouldn't expect one, but it IS a half marathon.  That's quite an accomplishment.  I'd love it if the KRRT designed the medal to be something similar to the sticker they had in our goodie bags (hint, hint).

I definitely learned some lessons during this race.
- don't think I can hang with the fast girl or start off slower/close to my ideal pace
- GU in general on race day is not my friend.  Stick to Honey Stingers, Shot Bloks and Sport Beans
- try my best to not swear at the people who love me and are there supporting me

Half Marathon #6 down.  Next scheduled race - LL Bean 4th of July 10k and then nothing (scheduled at least) until MDI Marathon October 14th.

I also love that I got to see these fine ladies once during the race, since it is an out & back race.  All three did a might fine job and I am proud to call them my friends.


And a race wouldn't be a race without the support from some adorable cuties.  Apparently Scoutie was hot too so she took part in the sponging as well.  And Addie, well, she is just too adorable!  Izzy was there too, cheering me on, but didn't pose for Stacy.

Finally, I need to say thank you (for the millionth time) to my fellow Rail Trail Chick, Stacy, who chose to not run yesterday's race but still made it out on the course to be our official photographer.  Without her I'd have zero pictures because apparently my sitting both cameras beside the sponges yesterday morning wasn't enough of a hint for my husband.  But in his defense, he (and Wade) did an awesome job keeping us cool with the ice water and sponges.  ﻿
half marathon