- July 27, 2012
The garden is begining to bust out the wax beans which means I get to try out some fun new recipes. Of course I turned to my favorite cookbook- Pinterest - for ideas.

I found this incredible recipe and I had almost everything with the exception of the green onions and parsley - so I just omitted them and I didn't have dijon mustard which I substituted regular yellow mustard. It was incredible! If you like tomatoes, goat cheese and wax beans, I think you should definitely make this. The best part - Ward is not a fan of goat cheese or tomatoes so it was ALL MINE! 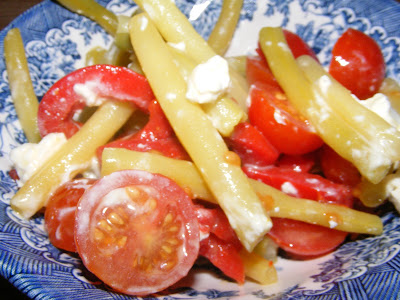 Next up, I was inspired by Heather's Eggplant Mushroom Lentil Burgers the other day, but wasn't feeling  the burger part.  So I opted to make an Eggplant, Mushroom, Roasted Red Pepper Pizza instead.  I had two pizza crusts to use up so I made the kids a cheese one and made myself the delicious pizza.  Ward was missing, so he completely missed out.

Recipe:
1.  First I sauted the eggplant and mushrooms in the olive oil and sprinkled some salt on top.  This part took maybe 5 minutes.
2.  Then I topped the eggplant/mushroom combination onto of the pizza crust, spread some roasted red peppers and sprinkled some cheddar cheese on top.
3.  Then I baked it for about 10 minutes and then inhaled this pizza.  It was THAT good!

I forgot to mention that the pizza was last night's dinner.  I still had a 1/2 of that eggplant and the 1/2 of bella mushrooms to use up, so I opted for a wrap for my dinner tonight. 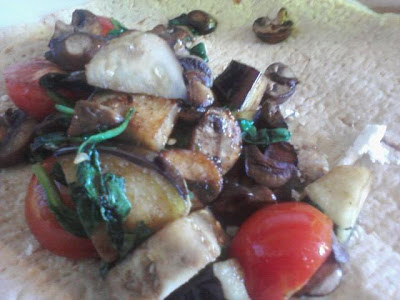 Recipe:
1.  Again, I sauted the eggplant and mushrooms but in coconut oil tonight.  Then I added in the spinach and tomatoes for the last couple of minutes.
2.  Next I spread out some goat cheese on the wrap and then scooped out the mixture from the pan and put on the wrap.

Again, wow!  This was incredibly easy and delicious!  I should have grown some eggplant in the garden.  Next year.  For sure.


Thank you Heather or the inspiration!   Both of my dinners were delicious.