- November 09, 2012
When it comes to running, I definitely prefer to run outside.  There is something about the fresh air and running to a destination that is much more pleasing to me.  Last year, I somehow managed to run outside for almost every run.  I believe I only "came inside" 1 or 2 times and I had to borrow my day care provider's treadmill.

This year is FAR different.  I now work at a local gym, which = access to a treadmill basically anytime I want AND I work at my local high school that has a fantastic fitness room - just a few doors down from my classroom!  I went to having access to zero treadmills to TWO!  Anytime I want.

As you know, fitting in longer runs can be a challenge for me when it comes to my work schedule, Ward's work schedule and taking care of/being around for the kids.  For some reason, Ward worked from home on Wednesday and Thursday which to me = GO RUN JEN!  So I did.

On Wednesday I took on 10 miles afterschool on my beloved rail trail.  We had a snow storm approaching us so the winds were picking up.  It was 34F, with 20 mph winds and a "real feel" of 24F.  Brrrr.  I know, I know.  It's going to get colder.  I can handle the cold.  It's the wind that kicks my butt.

Fortunately for me, I ran into the wind for the first 5 miles, which meant smooth sailing on my return run.  Nice. 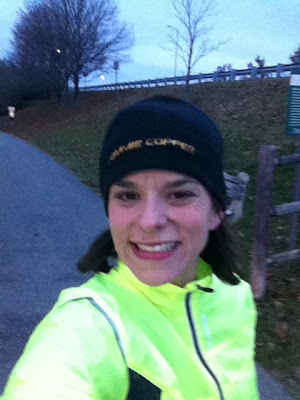 I was quite satisfied with this run.  I basically had the trail to myself.  I only saw two other crazy runners out there and a few people walking.  I felt incredibly underdressed compared to the walkers for sure.  They had on their winter books, big thick down jackets, hats, scarves, and thick mittens.  It was quite a site for sure. 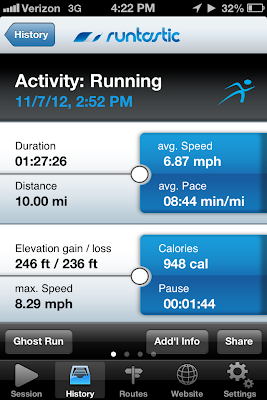 I also got to try out Runtastic again.  I've got to say this app is pretty awesome.

Thursday morning we woke up to a few inches of the heavy, wet snow.  Nothing major at all, especially for Maine.  We definitely got the easy part of the storm.  I felt especially bad for the folks in NY and NJ who already suffered with Sandy and then got hit by this storm.  Not fair at all.

For us, the few inches of heavy wet snow, meant Izzy got to pull out her winter boots.  She was so excited to put them on before heading off to day care.  She was even super proud of herself for being able to put them on all by herself!  When did she grow up so fast?

The few inches of snow also gave us a 2-hr delay for the boys and I.  Which meant I drank an extra two cups of coffee and the boys played in the snow.  I did think about going out to run, but thought sitting beside the wood stove drinking coffee sounded much better.

Just because I chose to not run Thursday morning, doesn't mean I skipped out on my run.  I definitely ran!  Ward was home again, so I headed off to the gym as soon as I could afterschool.  I did consider running outside.  Last year I would have.  But like I said, I have access to two gyms - and I didn't feel like running outside, so I took my run inside.

I thought about taking on 8 miles on the school treadmills but the thought of running 8 miles on those treadmills (they aren't as high quality as the gym ones) didn't appeal to me...so off I went to the gym. 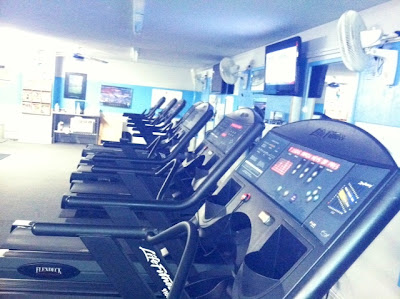 And this is what I had.  The entire cardio room to myself.  I only had two visitors during that entire time - Ron, the manager, and then my pal, Mike, who came up to run as I was finishing up.  I meant to take a sweaty picture of myself after the run, but I completely forgot.

So, end result - 2 days = 18 miles!  Which means that today is a rest day and a day that I'm sporting my ProCompression socks. 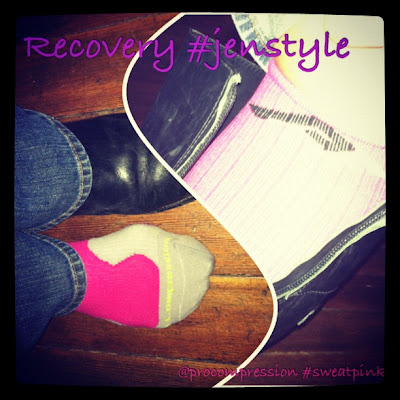 Yes - I wore them under my LL Bean boots.  And my calves love me for it.  Actually, I'm still sporting my socks just because I can.

Where do you prefer to run?  On the treadmill or outside?