- April 17, 2013
What started out as a celebratory kind of day, quickly changed to the kind of day where you hold your family closer than you have ever done before and not let go kind of day.

Monday I was one of the thousands of spectators who had a front seat view of the home stretch of the beloved Boston Marathon.  I was there with my kids and brother-in-law.  We were there to cheer on my husband and all of our friends running Boston. 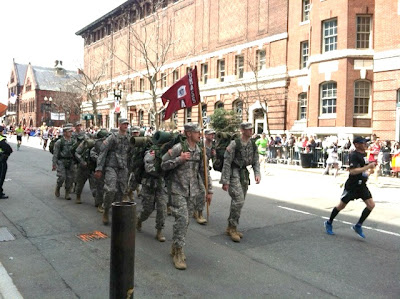 We got to see the elites go flying by, looking like the running rockstars they are and our amazing troops who make me proud to be an American.  Then we saw Ward and cheered like hell!  He looked freaking fabulous and strong.  I am one proud wife and my kids are in awe of their daddy.  As soon as he ran past us, we grabbed our chairs, the kids, and Wade and I were off to meet Ward at our predetermined meeting spot. 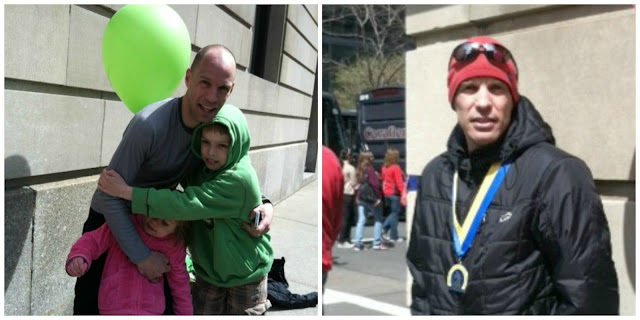 Luckily we were about 4/10ths of a mile away, boarding the T, when the explosions happened.  I had heard some rather loud noises as we were about to get on the T, but thought of them up as other transits arriving or departing.  Within a few minutes and just moments after posting this picture of my daughter on facebook, I saw the first mention of explosions. 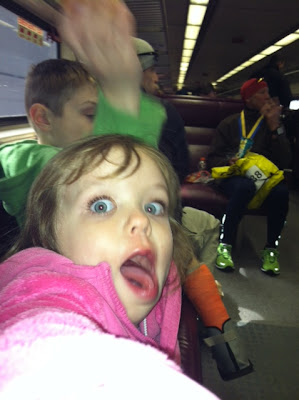 And of course, in classic Jen style, I was not subtle when I read the news.  I made a loud gasp that obviously attracted most of the passengers around me and when Ward asked me what had happened, I said what I read.  Immediately everyone around us grew silent as they scoured their phones texting, calling and searching the internet for more answers.  One by one more people came forth with information.  There was quite a bit of tension in our car on the T.  I'd say most of the passengers had just left the marathon - either as spectators or runners - from looking around.

Then a few minutes later, Izzy, our 4 year old, was playing with the helium balloon someone had given to her while we watched the marathon.  And of course, she popped that balloon.  That loud bang definitely started a large majority of the people sitting in that car.  I quickly responded, "it's okay, it was just a balloon".  Some people around us laughed it off, but some were definitely not impressed.  I really wanted to take Izzy and just hide under a seat at that point.   Talk about not good timing for a balloon to burst.

I am thankful for cell phones yesterday.  My facebook and texts were flooded with messaged from loved ones checking on our safety and I was able to let them all know we were safe and were on our way out of Boston.  We were able to check on friends that were at the marathon and know they were safe.  We did have a bit of a scare when we weren't able to find our friend Sarah and her husband, who was spectating the race where the 2nd explosion went off.  Luckily, she had left that spot 10 minutes prior to the explosion and she and her husband are safe (and home with their little boy).

It is my job to protect my children.  I don't know what I would have done if we were still on Boyston when the explosions took place.  Would I have thrown them to the ground and covered them?  Would I have grabbed them and ran like hell in the opposite direction?   There are too many what ifs floating around in my head today and I hope to hell that I can get them out of my head sooner rather than later.  I've never been so close to a horrific event and to have my family so close just breaks my heart.

But what breaks my heart even more are the deaths and serious injuries that have resulted from someones hateful actions. 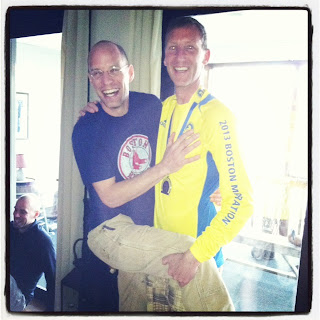 Ward and many of our friends, qualified for Boston again, and you know what?  They are running it again and we will be there to cheer them on.   And I too am going to work harder to get that BQ.  Some sick jerk is not going to force us into hibernation.  No way, no how.