- February 04, 2014
After my day of race prep - yoga, drinking water, eating with friends, and putting together both of my outfits - I was way ready for the Midwinter Classic and ready to show off my Spandits Ambassador singlet!  Go Team Spandits!

I'm coming to realize that Ward and I should never ever do the same races again.  Ever.  And we shouldn't drive together to a race either.  I get high strung and excited and he is grumpy because he has to wake up early and then grumpy because I am nagging him to death about being in the car on time....all while I have myself ready, the dog taken care of, and kids ready.

This time, he was actually on time.  I'm not sure how, but he was.  So we loaded the car and dropped the kids off at my in-laws (it was a long drive .... like .07 of a mile...but it's quicker that way).    We were doing so great on time, that we made a quick pitstop at LL Bean to stock up on Honey Stingers. I only needed a couple, but thought since I was there, I would just clean them out... 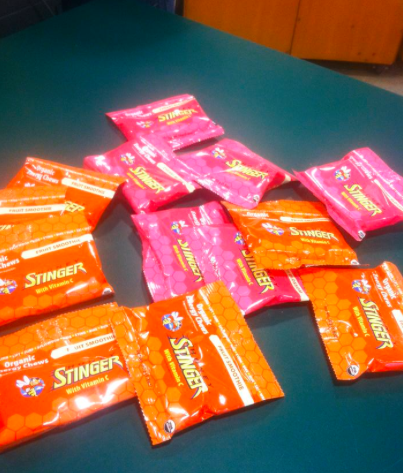 I'm sure they had more boxes in the stock room.

When we went back to the car, it wouldn't start.  Oh great.  Add this great thing onto grumpy man's day.  Thankfully I'm quick on my toes and called Jill immediately and thankfully they were at the Freeport exit - talk about perfect timing! - so they came and rescued us.    Then off we went to the race.... all four of us.  I quickly noticed both Jill and Wade were wearing shorts.  I had on my skull capris.  Because I cave to peer pressure like that...I did a quick change in the backseat while enroute...hoping I wasn't making a mistake.  Shorts in February in Maine?  Why not?  As we got off the exit, I realized I didn't have my Garmin.  Actually, thinking about it now....where the heck is it?  I use it so infrequently, I should probably go look for it.  My race outfit:  Gap Body l/s top, Spandits Singlet, Spandits Galactic print shorts, ProCompression socks, and Reebok Nano Speeds.

When we got to Cape Elizabeth HS, we quickly got our bib #s and I picked up my shirt.  I will note that the shirt is optional and you pay extra for it.  I'm not really sure why I do this to myself.  I get so many race shirts and never ever wear them.  Then I end up tossing them.  I'm still trying to decide if I like it or not.  The design is the exact same as last year and the year before.  But this time it's orange.  I guess I'm all set for running during hunting season next fall or as Jill joked today, I could wear it to school with my black pants and I'd be all ready for the next Pep Rally - since orange and black are Gardiner colors.  Shortly after we arrived - the rest of our little group arrived. 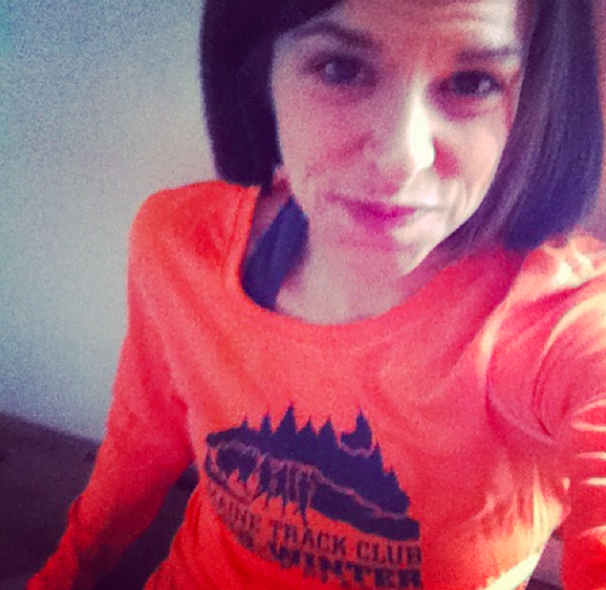 Just after we settled in, I saw David, the man behind Maine Running Photos and asked him to take a picture of us and a few other running friends that were nearby.

Thankfully this race is covered by Maine Running Photos because other than the Honey Stingers picture, I didn't take any other ones.  Thank you David and the rest of the Maine Running photographers.  You rock!

After hanging out for a little bit, and visiting the bathrooms a couple of times, we started getting ready to head outside.  Carrie and I took off for a short warm up and then we met the rest of the crew at the starting line.  We wished each other luck and then got into our spots.  I did remember my iPod, so I got that ready to go.   Shortly after that we were off.  I didn't hear any noise to indicate the race start...maybe because I was playing around with my music, but people started running, so I did.

Carrie had her Garmin, so I stuck with her.   And I'm glad I did.  She got me through it.  Around mile 7, I wanted to walk.  I was done.  I could feel my left foot slapping against the ground.  But she kept running.....so I did.  And then around mile 9 she muttered something about her legs and I told her to keep going.  I love that we pulled each other through this one.  That's the thing about having great friends, we are there for each other.

When we came through the entrance to the high school, it was all downhill, and Carrie apparently found her speed again....and took off.  I was dead, but I had to finish with her....so I pushed through. 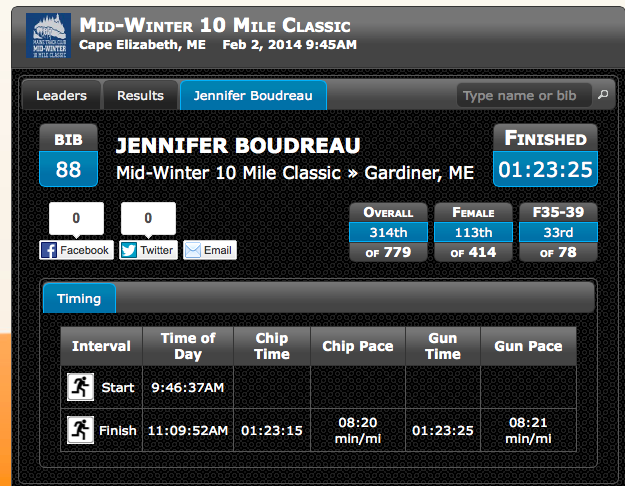 Although....this is our actual split information from Carrie and her garmin said we ran 10.06.  I'm going with her pace.  Just because I can and I'm not an age group winner or anything like that.

This was the first race I've really raced since last May.  Yes, it's been that long.  I had my Sugarloaf PR and then had a pretty great 5k pushing Izzy in the jogger a week later.  Then I fell apart and spent the rest of the time injured and then slowly rebuilding myself. I've also had great difficulty with my asthma that has decided to return in full force and some odd allergy to exercise (more on that soon...I have an appointment with a specialist).    I haven't followed a plan.  I have been enjoying the life of running whatever mileage whenever I want.  I've also enjoyed eating a bit as well...as I've definitely put on some poundage.   I've done some speed work, but not enough to think I was going to PR or anything like that.  So honestly, I am quite happy with my performance on Sunday.

I am now ready to start an actual training plan and put in hard work because I have a goal in mind.  A couple of years ago, a certain half marathon beat me down.  This year, I will kick some major booty instead.  I have my plan printed out and ready to go.   I've got this!