And, I have allergies.  But I already knew that.  I had the back scratch test years ago.  Way back when I was in college.  The only change from then to know in terms of those environmental allergies is that I am no longer allergic to dogs.  Back then, I was.

Anyway.  Last Thursday I finally got in to see the allergist.  I had orders to get my asthma under control.  And I did.  I passed the breathing test with flying colors!  Now just 3 more months of the steroid inhaler and I can hopefully change my prescription to Singulair.  Fingers crossed.

But aside from the asthma, I need to figure out why the heck I was experiencing Exercise Induced Anaphalaxis.  The allergist wanted to rule out food allergies.    And I was tested for: wheat, dairy, eggs, soy, nuts, fish, shellfish and tomatoes.   I was also pricked with a positive and a negative - part of the control. The positive was supposed to react and the negative wasn't supposed to.

After I was pricked I sat there for 15 minutes.  I wasn't allowed to scratch or itch.  Which was fine because I didn't experience a lot of itching.  I did feel a little bit in the area of the positive and the tomato.  But that was it.  At the end of the 15 minutes, the nurse came in and declared I wasn't allergic to any of those items.  The allergist came in and said the same.  He did note that the positive was supposed to have a bigger reaction and asked me if I had taken any antihistamines.  To which I said nope!  I was 5 days antihistamine free.

I will say that I NOTICED that out of the scratches I had on my arm - the positive and tomato were both larger than the other ones.  They were puffy.  Not super puffy.  But there was some puff to them. And they were the same size.  I will also say that the next morning, there was zero evidence that I even had all those scratches on my arms EXCEPT for the positive and tomato.  I could still see those spots.  Hmmm......  I'm not an allergist, but I can't help but think.

Anyway, while I was there, the allergist thought he'd run me through even more tests to find out what I'm allergic to for environmental allergies.  So this time it was the back scratch test time. 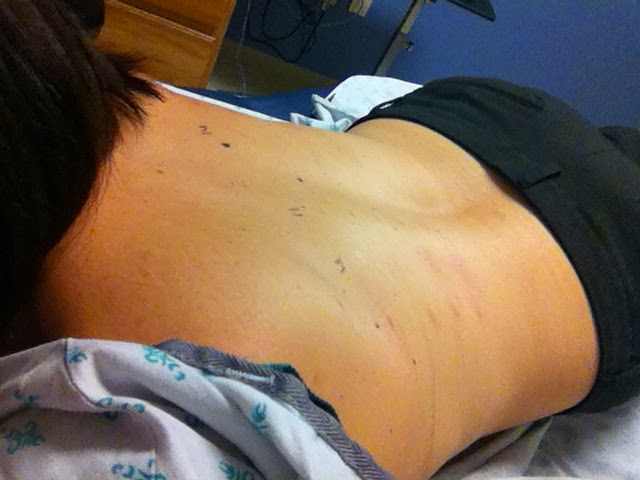 It was a little awkward trying to take pics of my back, but I did it.   Pen marks, moles, and red blotches.  Nice. 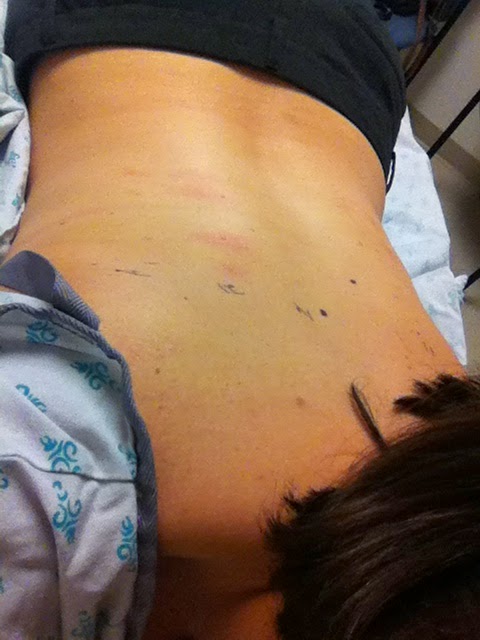 The verdict?  Cats, dust mites, pollen, grass, weeds (all).  But I knew all of that already.  I just haven't had many major allergic reactions to those things lately.

So, I asked him about the EIA and the allergists suggestion was - continue to run 4 hours after I eat.   I just spent 100's of $$$ perhaps maybe $1000s on allergy testing and that's his recommendation?  Ummmmm.....seriously?  So, does he not get it?  I'm a working mom, who has a very small window on most days to run. If I see an opportunity, I do it.  But most of the time I need to get out for my run by 2:30, so I can be home in time for the boys to get off the bus at 3:15.  So that means I'm eating my lunch at 10:30?  and then not snacking at all.  I can do it, but I'm starving and then I have zero energy when I run.  I only did it a few times because I had to be antihistamine free for 5 days prior to the testing.

I did demand a prescription for an EpiPen because I do not want to be in the middle of a Ragnar leg this May and have a reaction without anyway to deal with it.  That scares me.

So, after all of that, my plan?  Work on my asthma treatment and take antihistamines prior to running.  It's been working, so I should do what works.

And since EIA is random.  Those who suffer from it do not react every single time they run or exercise, I'd rather be safe than sorry.  I was rather hopefully for answers, but super disappointed in the suggestion because I think it is not a realistic suggestion.  Or maybe I'm just too stubborn.
allergies EIA Exercise Induced Anaphylaxis