I'm a Boston Marathoner! {my recap}

- April 22, 2015
It still seems quite surreal.  But the pain is real.  The fact that I still cannot walk down the stairs at my house without going sideways or backwards - is my lingering reminder that only 2 days ago I RAN THE FREAKING BOSTON MARATHON! 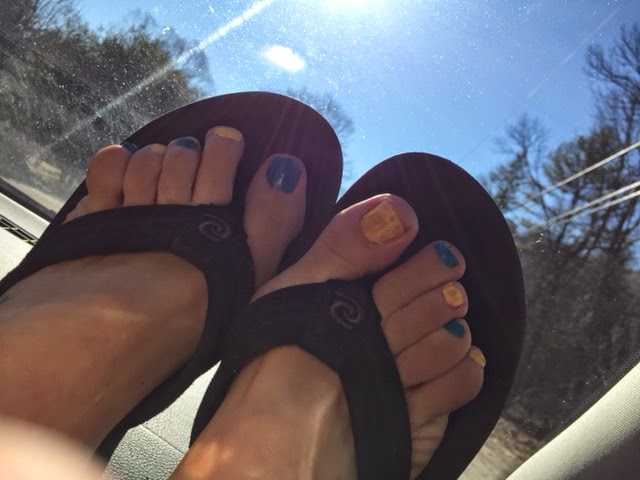 This race has been on my list for year.  I thought I still had a couple more years until it would finally be MY TIME to toe the line.  Somehow I stumbled across a contest on Instagram a few weeks ago and thought "what the heck, I have nothing to lose."  So I entered. And somehow I was selected!   Immediately, I started obsessing about my race outfit.  I knew it was going to consist of ProCompression, Spandits, Headsweats, and Skechers, but didn't know which combination it was going to be! 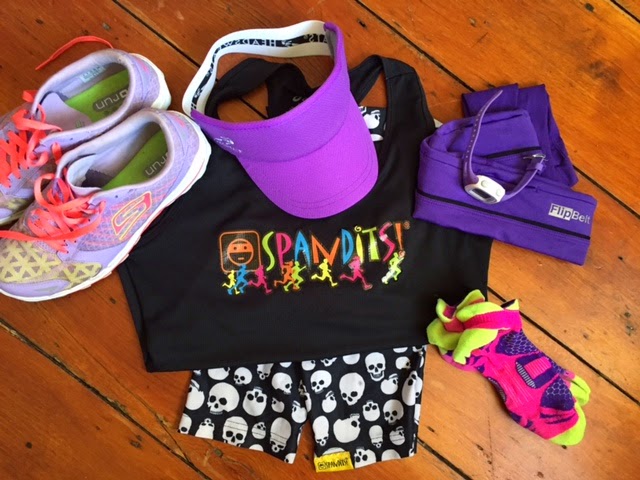 This year there were 3 Boudreau's running Boston!  Myself, my husband, and my brother-in-law.  We joked about it "now it will rain for sure" because I was running it. 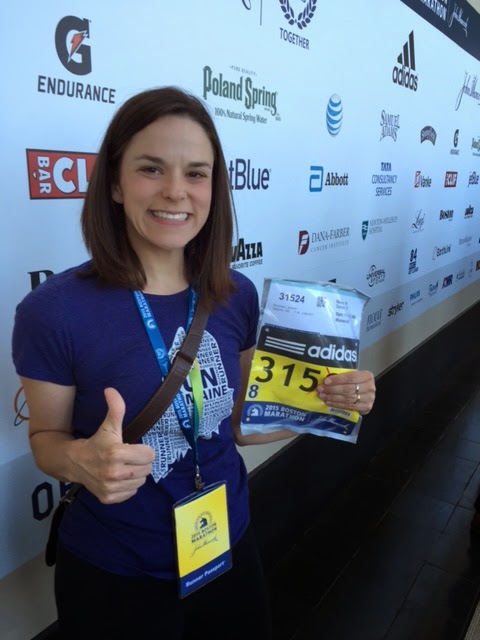 Sunday morning we made our annual trip to Boston.  First stop - the expo and bib pickup!  Of course, I was beaming!  My FIRST Boston! 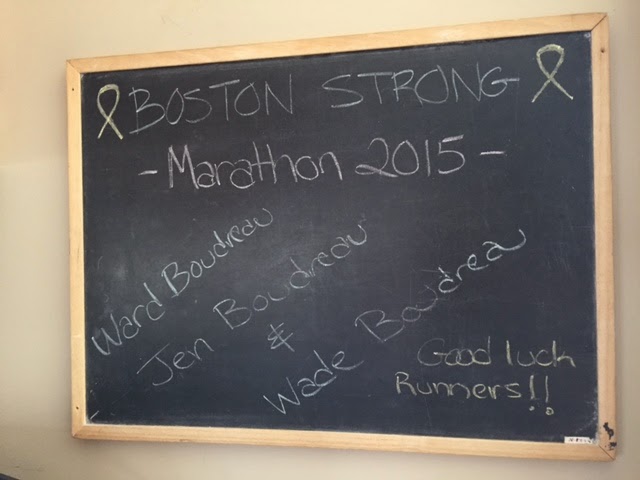 Afterwards, we made the trek to Aunt Judy and Uncle Pete's where we got to hang out with family - our annual family gathering.  Over the past 4 years, this has become a tradition that we all look forward to! 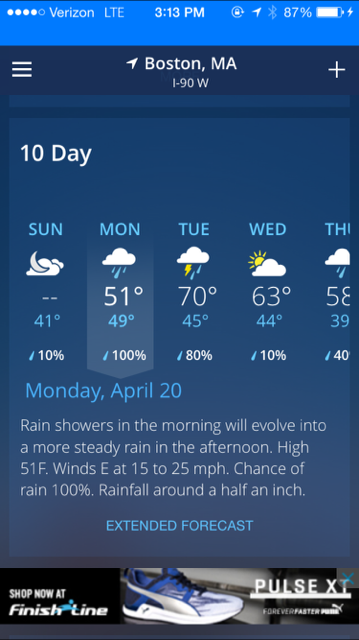 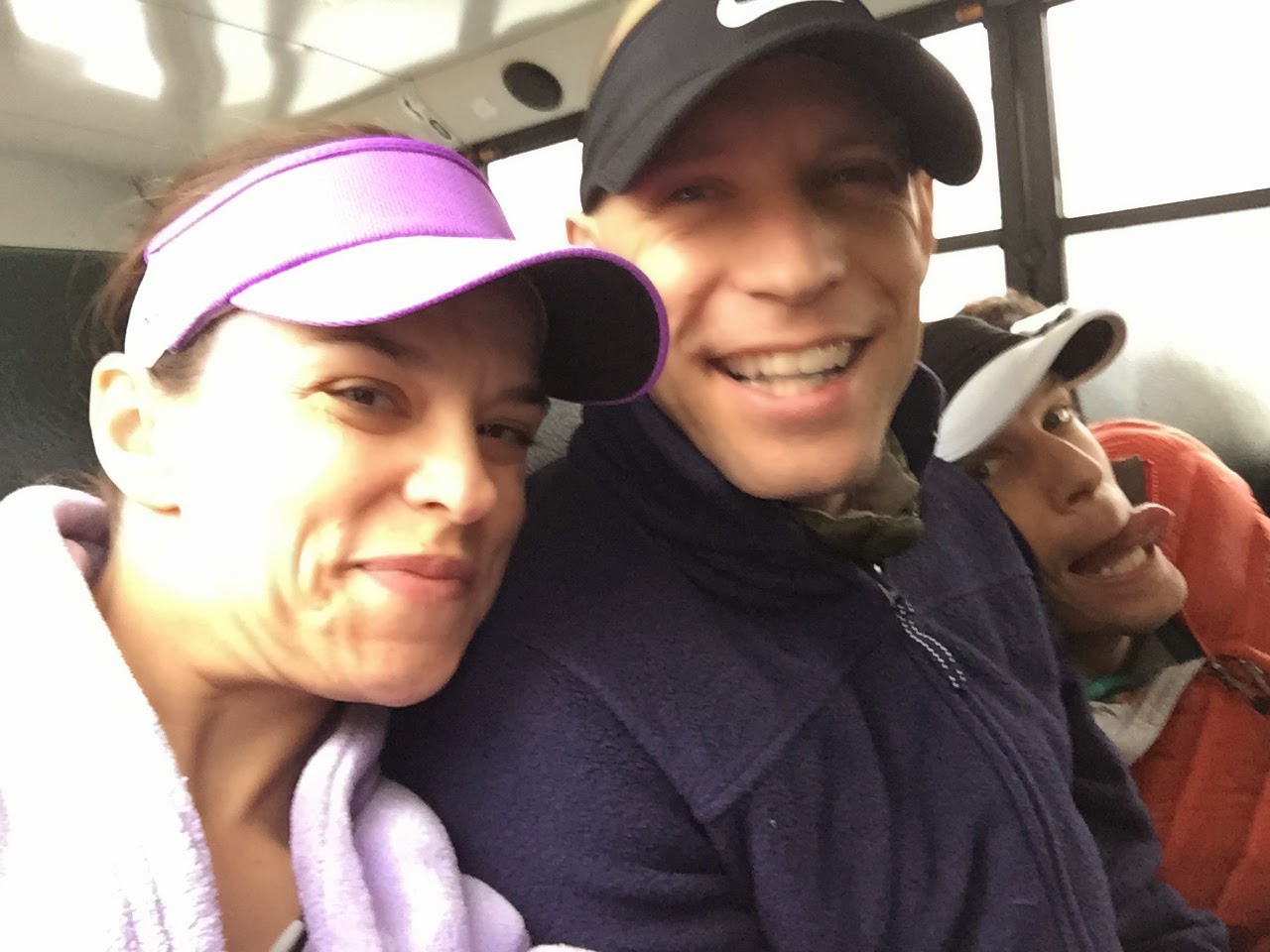 Uncle Pete dropped the three of us off at the shuttle at South Street (which somehow we never knew existed before, but this was fabulous!)  In prior years we had to leave at the butt crack of dawn to do the drop off because the Hopkinton streets were closed down at 7am.  But with this shuttle drop off, we didn't even leave the house until 7:30 and we still got to Athlete's Village with tons of time to spare.  Next year I'll definitely be dropping Ward and Wade off at South Street. 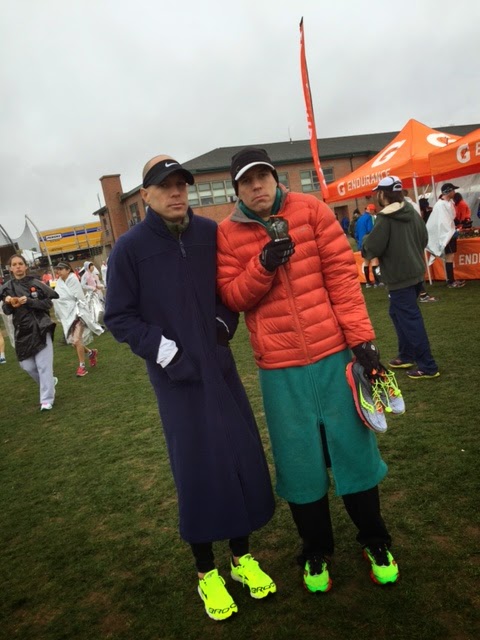 Ward and Wade both qualified, with some rather great times, so they were in wave 1.  I, on the other hand, had a super high bib # as I did not have a qualifying time, so I was in wave 4, corral 8.  Which meant that I had almost an hour by myself after they left to run.   Basically, after they left, I spent my time drinking water, waiting in the porta-potty lines.  Then I would pee and get to the end of another line.  They were crazy long and I have a ton of anxiety regarding peeing before a race and not being hydrated enough.  This strategy seemed to work.  Sorta.  While I was wearing my purple fuzzy robe, I was still freezing.  I never warmed up and was visibly shaking while waiting in the lines.   I wasn't the only one.  Looking around, I saw many runners shaking.  Thankfully it wasn't raining, quite yet. 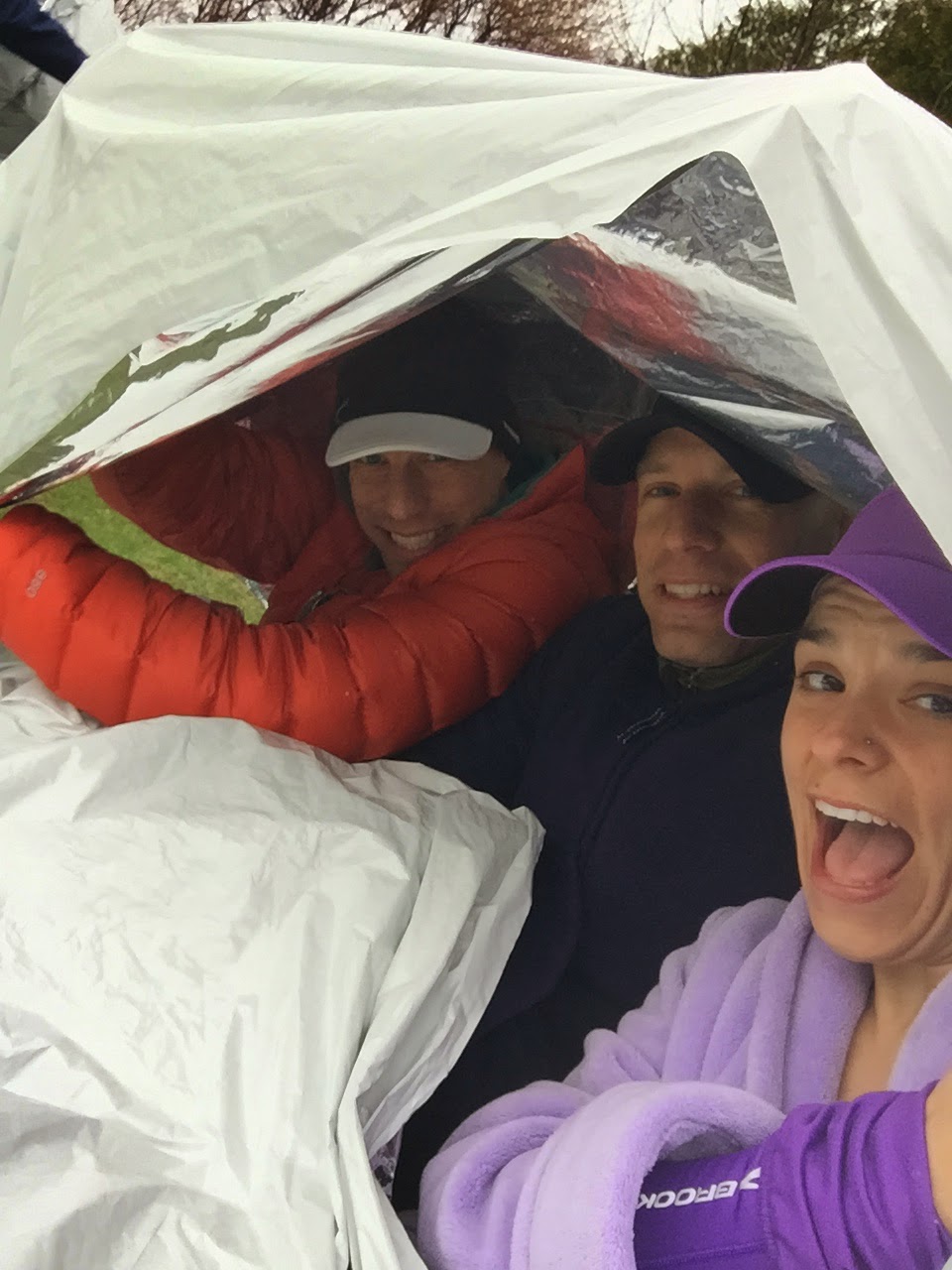 Finally, wave four was called and we started the slow, meandering trek to the starting line.  I made one last pee stop and strongly considered just running in my robe.  But then the rain started.  And it wasn't a warm rain. 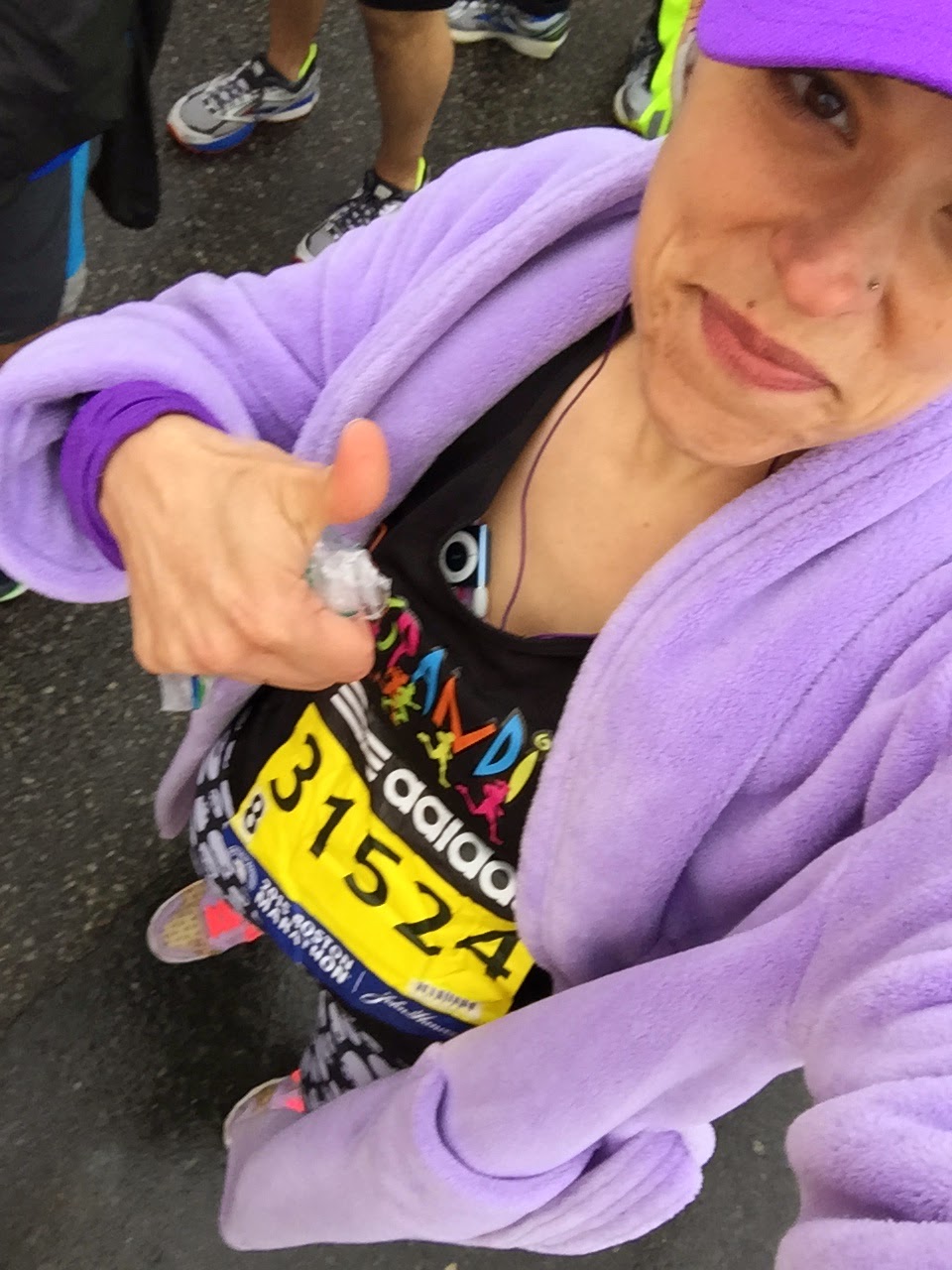 After what seemed like forever, we were finally off.  And by off, I mean it was a very slow crawl of a start.  I did see a state police officer I talk to at my gym quite often, who was there at the starting line, working with his bomb dog, so I shouted to him and then finally the pace picked up.  A little.  The first 5k was rather slow and hard to find a comfortable pace.  I'm not used to being in such crowded races like this and found this a little frustrating.  I had it in my head that I was going to PR. Finally the crowd started to space out and I found my pace.  I felt great.  The rain was light but the wind was head on.  My fueling started at mile 2 with 1 shotblok.  The plan was to take a shotblok for each mile.  This strategy has been successful with training and previous marathons.  So that's what I did.  I had my music loud to block out the crowd.  I wanted to be in the zone and not let the crowd excite me so much that I pushed too hard.  My previous PR was 3:56, a 9:01 pace.  This training cycle had been solid and in my head, I felt that I could definitely PR in Boston.

What I didn't account for was that between miles 13 and 16, my lungs started feeling heavy and it was hard to breath.  It wasn't an asthma-hard-to-breath.  It was I'm too friggin cold, I cannot breath.  Then my legs became lead and I couldn't move them anymore.  I also knew I was off because I seriously for the life of me, could not remember when I had fueled last or when I took water.   It took me a little bit long, but then I reached for my phone and texted Ward.

I knew he was done because I had been tracking him with texts and saw he finished with a 3:06.  Shortly after that text, he called.  He asked if I was okay.  I said "so far.  I am going to finish.  It's just going to take a lot longer".  He said "just have fun now".  And with that, I was no longer beating myself up, I took out the other earbud, stuffed them into my shirt, and just soaked up the crowd.  The excitement of Boston.  The BEST crowd I've ever experienced in my life.  I made it my goal to high five every kid I could or wanted to high five me.  I walked when I wanted. 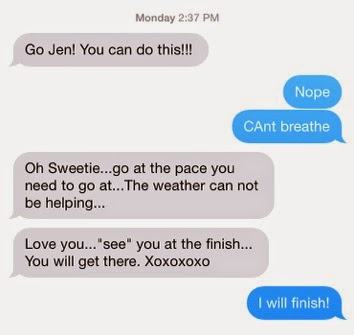 Then Carrie texted me to go!  I let her know I was done racing but wasn't going to stop.  She gave me some sweet words of encouragement.   I maybe cried a lot at this point.  I was feeling bad for myself. But I was going to finish.

As I said, the crowd was amazing. Having only run 3 other marathons - all in Maine.  I've never had a crowd like this before! 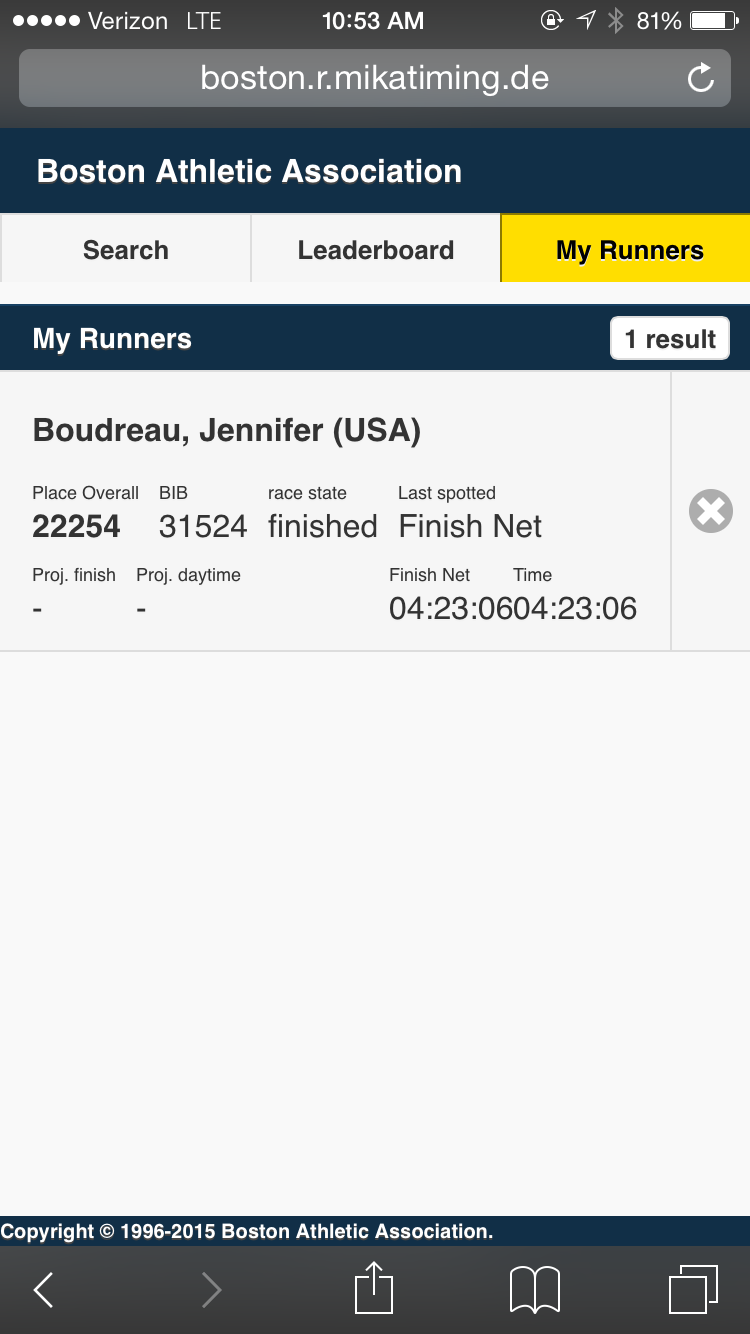 As I neared the last little piece before turning onto Boylston, I became very emotional.  From that moment, I started crying and cried that entire final stretch.   And when I reached the finish line - I had accomplished my first Boston.  I was am a Boston Marathon finisher.  My time:  4:23.  The slowest marathon I have ever run and the hardest conditions I've ever run in; but by far, the best course and crowd I've ever experienced.  But then I got this text.... 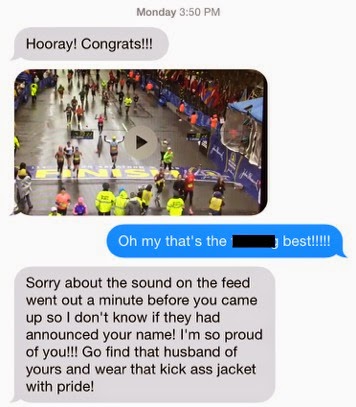 Within in minutes of me finishing, Carrie sent me the feed from when I crossed the finish line.  How awesome is that?    It took me all of 30 seconds to find our meeting spot.  Jill, Wade, Tucker and Jackson were there waiting for me.  Ward was out looking for me.  Thankfully they had my dry clothing, but there was no time to put them on at that moment.  We had a commuter train to catch!  So I hobbled as fast as I could while Wade called Ward and told him to move fast toward the T station.  Finally, below ground, I changed out of my wet clothes under my awesome Boston Marathon warming blanket thing.  And Jill is the best because she bought me some super cute (and dry) pants to put on too.

My Facebook feed was flooded with an overwhelming amount of congratulations!   The love I felt from my family, friends, and students made me feel like an absolute rockstar.   I love them all.

But next year I'll be returning to Boston as a spectator, as Ward and Wade both have kick ass qualifying times.  I absolutely love this race and cannot wait to spectate next year and have another family reunion!