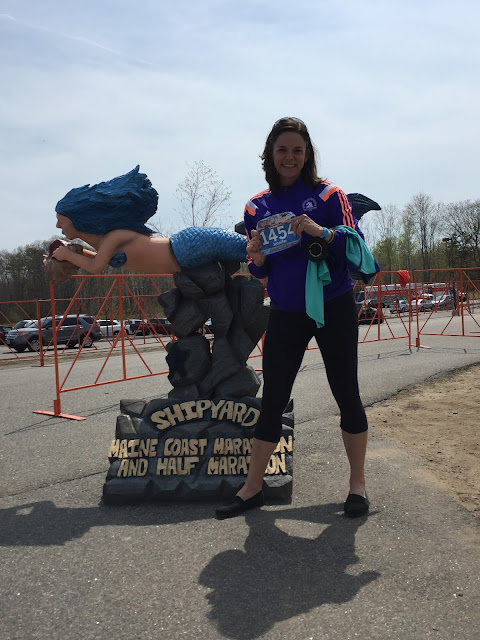 A little rewind...3 weeks prior, I ran the Boston Marathon and scored my first worst marathon in sub 40F/25 mph headwinds/downpours - you know - fabulous weather.  I made smart marathon choices and only brought my singlet with me and froze my ass off.  Seriously?  Who am I only bringing one top?  Anyway, this post is not about Boston. 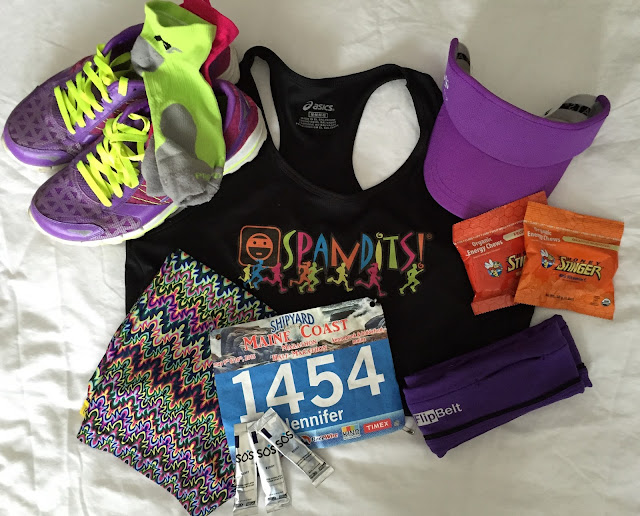 Maine Coast Marathon Gear - Skechers GoRun3, ProCompression low socks #twopairdontcare, Spandits singlet, Spandits custom (and out of print) boardies, Headsweats Visor, FlipBelt (which I lost at the marathon...and had to buy another because I love it so much), SOS Rehydrate, and HoneyStinger. 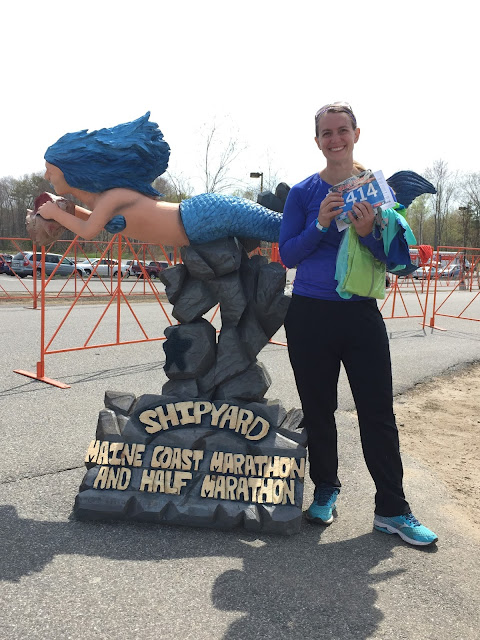 Fastforward 3 weeks later, I was ready.  I felt absolutely ready to get myself a marathon PR (which would be a sub 3:56).   Carrie and I headed down to the expo, got our shirts and beer bracelets, snapped some photos with the mermaid - then headed to our hotel. 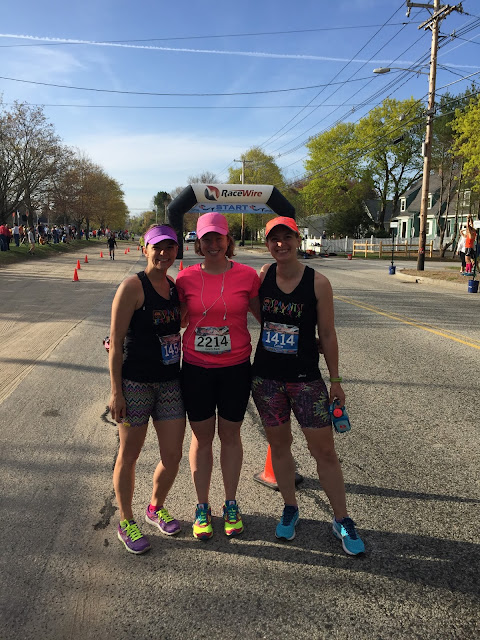 We met up with our friend Gretchen and her husband (who had both done the half marathon earlier in the day - Gretchen was doing the 39.3 challenge - because she is badass) and went out for dinner.  I stuck with my normal burger and beer which has worked wonderfully before.

The next morning, Gretchen's husband took us to the starting line.  By then it was already rather warm and I was getting rather nervous.  Thankfully I ignored Ward and brought along a water bottle to hold (and toss if I felt like it).

But then I seriously hit the wall.  I suddenly felt like I was running in an oven and I felt my arms and they were dry....then I felt a chill.  When there was no reason to feel a chill.  OHHHH crap, I thought. I put on the brakes and called Ward to let him know I was done.  I was going to run/walk/crawl to the end...but it was going to take me forever.   I seriously didn't have a choice - I wasn't going to push it as I had to drive the 2 hours home and the rest of my family was 3 hours away at Tucker's soccer game.  So I played it smart - I think and just took in the gorgeous coastal Maine scenery the race had to offer.

After a bit I was hoping Carrie would catch up to me, so I texted her.  She was feeling like crap too...I told her I would wait for her and she said that she was about 2 miles behind me.  I offered to nap on the side of road for her and she said no.  Boo.  I was kind of hoping to take a nap.

So I trudged on.  Filling my water bottle with water/gatorade at every-single-water stop.  I was so thirsty and I felt like crap.

Finally I met up with a lovely woman who had run the half the day before...and I hung with her.  She and I would run together, then walk, then run and so on an so forth. 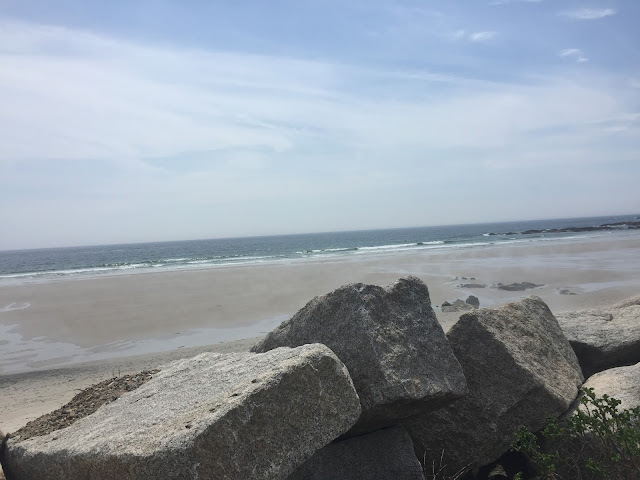 
And let's not forget...I had to eat pizza and enjoy my beer at the finish. 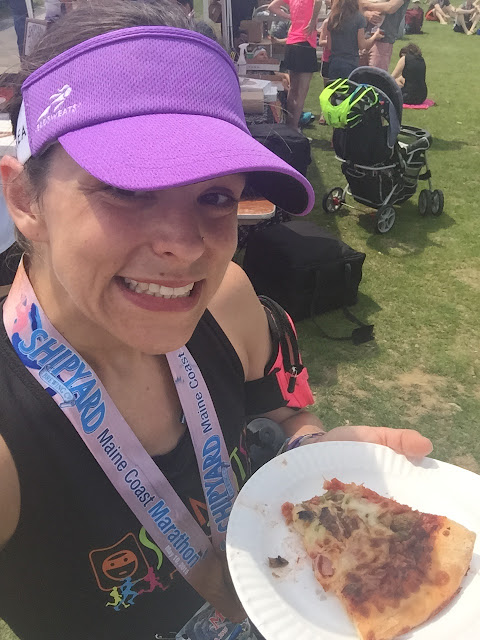 My knee was throbbing so much for the last 10 miles...and I'm thinking it was because I had slowed down so much....but I wasn't sure..so I asked for ice pack on my knee. 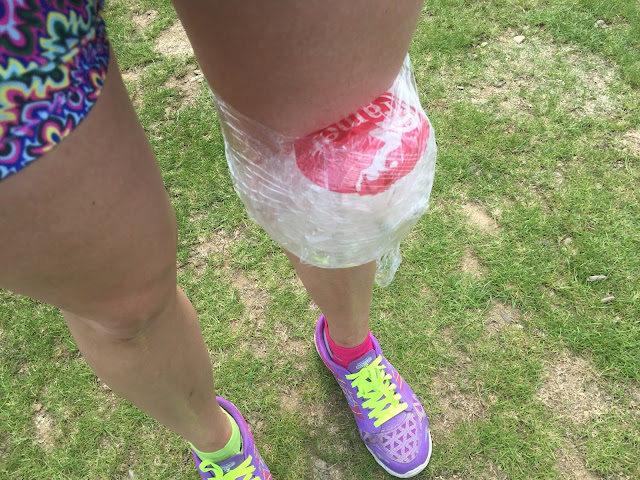 The course itself was rather hilly.  Perhaps it was the weather...but it seriously felt hillier than any other marathon I had done before.  The views were spectacular.  I wished there were more water stops...but I honestly do not know how many there were as my mind wasn't really working at its fullest capabilities.  There could have been more portable toilets at the start....long lines are never awesome.  And the shirt?  It's ugly as sin.  I never even put it on.  I tossed it as soon as I got home.  Will I do this one again?  I'm not sure.