- February 07, 2016
This past week, spring visited Maine.  I was happy.  I was excited for my upcoming race thinking *hoping* the weather was going to be just as awesome as it was earlier in the week.... the treat of 50 degrees.  I blissfully remembered the year that I ran the MidWinter Classic in shorts and how awesome that was.

Then Friday happened.  The surprise snow storm.  Seriously.  It was a surprise.  Thursday weather reports were saying "maybe an inch"....then by the 6:00 news, it was like "well 3-5 inches".... and in reality it was more like 9 inches.   I was a bit bummed because I was thinking the road conditions were going to be awful for Sunday's race...and I was positive it was going to be freezing.

Again.  I was wrong.  I don't mind being wrong at all.  The sun was shining.  There was virtually no wind.  A rarity in the winter in Maine.  And the roads were perfectly clear.  It was about 36F at the race start.

But let's back track to this past week.... yes the weather was awesome.  But my body was in pain.  Lots of it.  I skipped my run on Sunday because I felt awful all day.  I felt sharp horrible abdominal pains and a dull ache in my stomach all day....and felt beyond nauseous.  The feeling didn't really go away all week.  I grew nervous and anxious about how I was feeling and how it was going to impact the race.  I actually contemplated not running and volunteering instead.  But thought I would wait until Sunday morning to decide.

Thursday came, and I went out for a little jog.  I made it all of a half mile from the house and had to turn around.  The pain was too much to handle and I felt so awful.  Zero energy.  What the heck is wrong with me!!!  Ugh!  Again, I felt like I shouldn't run Sunday....but held off.

Instead, Friday and Saturday, I filled extra moments with yoga poses to recenter myself and please my achy muscles.   I was careful with what I ate and prayed my issues would go away.   And miraculously they did!

Sunday morning I woke up with zero pains.  No nausea and thought "why not!"  So I picked started at my Spandits and ProCompression collection and carefully chose my outfit.  I wasn't going to be fast...but I surely wanted to look good!   Obviously I paired my Spandits and ProCompression wisely with my Altra Superior 2.0's.  Note - I did switch out when we arrived at the race because the roads were super clear...and I chose the One 2.5's.  Awesome choice!!!! 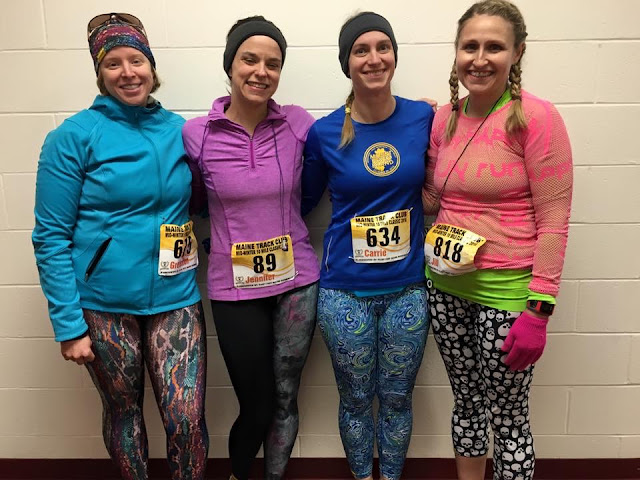 We headed down to Cape Elizabeth HS and gathered in our spot and took a pic!

And then I did some more hydrating with SOS Rehydrate Mango.  Seriously delicious! 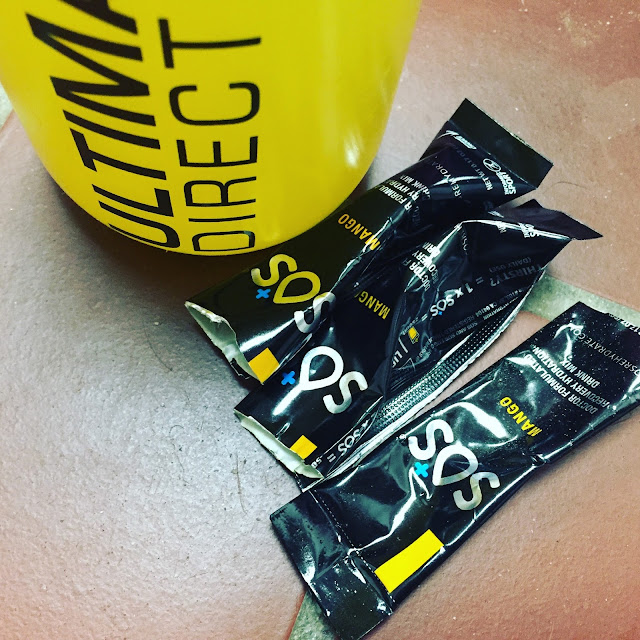 Then headed out to the starting line.  I pulled out my lovely awesome LL Bean e-store robe again....and wore it to keep warm.  It was meant to be a throw-away, but my brother-in-law parked right at the starting line...so I asked him to keep it for me.  Yay for having that awesome nana-looking zipper robe for another race!
The cannon went off and so did it.  Perhaps a little too fast.  But it's mostly downhill in the beginning so I blame it on that.  I held strong in the 8:05/8:08 range for a long time....and then around mile 8, like clockwork, the wheels fell off.  Again.  When will I learn?  I've done this race like a million times...and I know miles 8-9.5 suck so bad!

Now, about this race.  It's awesome. Well organized.  The volunteers are amazing.  Always smiling.  Always positive.  I love it!  I do look forward to this race every year.  The course is tough.... but I love it.

And the shirt?  I was telling Ward tonight that I like how the logo has stayed the same for the past few years and the color is just changed.  That's pretty cool!  And I love that the shirt is made by a local company.  Pretty fantastic to keep it local! 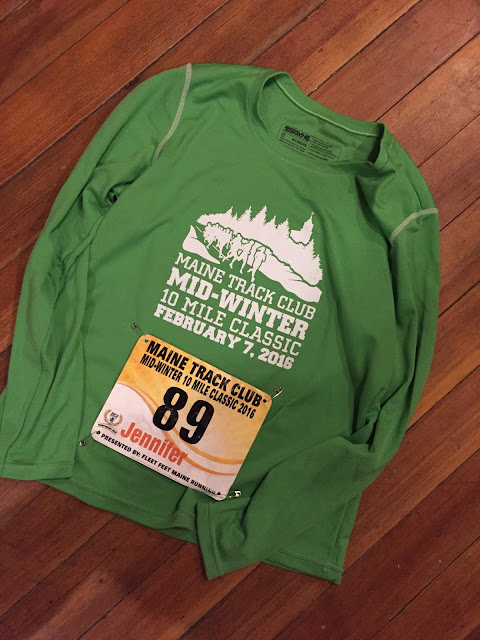