- June 07, 2016
I keep asking myself..... how in the world have I NOT done the Sugarloaf 15k before?   How many times have I been to Sugarloaf and NOT run the 15k?  I've run the full marathon, paced a friend in the marathon, spectated like a pro.... but never pulled it together to do the 15k.   Ugh.  I'm embarrassed to admit it, but I seriously have missed out on the best distance and race in Maine. 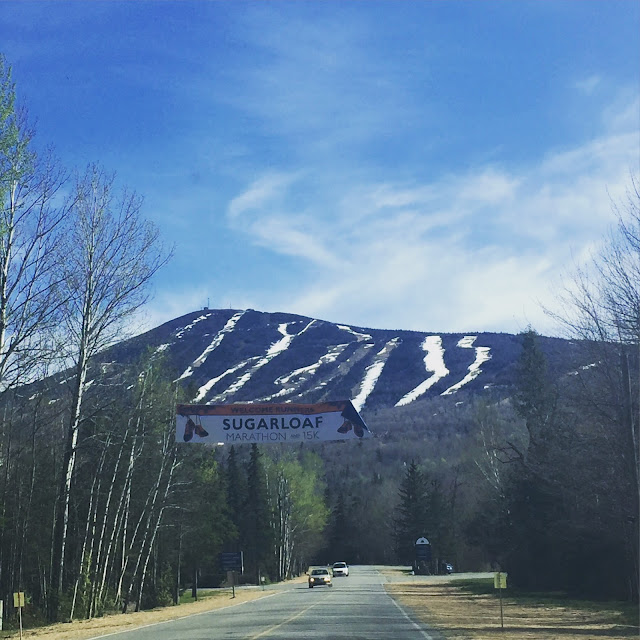 The Sugarloaf Marathon is by far my most favorite marathon in Maine.... and now the 15k, just takes the cake.  The last 9.3 miles of the marathon course.... and for sure the best part of the course. 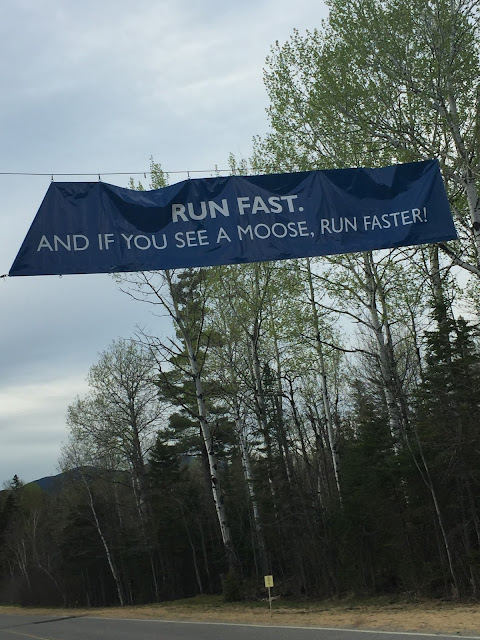 This year I started out with loose plans, wanting to do this race.   I actually wanted to do the full marathon, but then Izzy signed up for a spring session of dance and recital weekend fell on Sugarloaf Weekend.  But..... a month into the class, she decided she wasn't really into Hip Hop.  I have been raised that when you commit to a sport, then you're committed until the end.  However, she's 7.  And cried every single week before going to dance.  How was I teaching her responsibility if she's crying about going?  I'm actually teaching her to hate dance... and I didn't want that!  By the time she quit dance, it was too late that start marathon training.... so I said I was going to do the 15k. 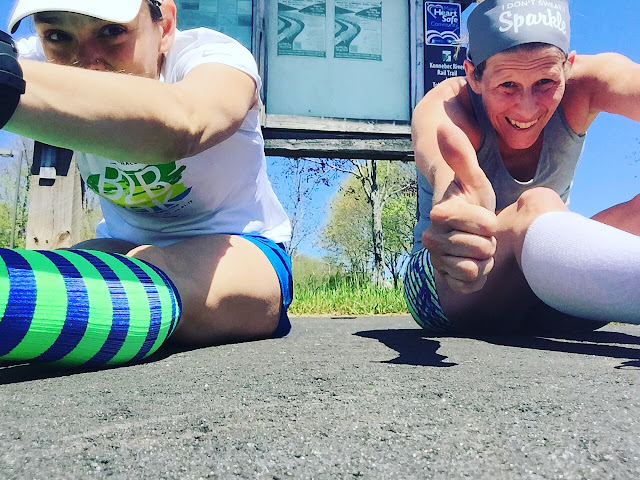 But then I forgot to register.  And I read on Facebook that it was full.  I was crushed.  Bummed, actually.  Fast forward a few days later, when I'm at a school function... and my friend Francine says to me that she heard the race opened up a few more spots!  I seriously left Izzy with Tucker in line and sprinted to my car for my credit card, so I could register right then and there! I was pumped!  Then Francine invited me to stay with her and her friends in a condo.... even better! 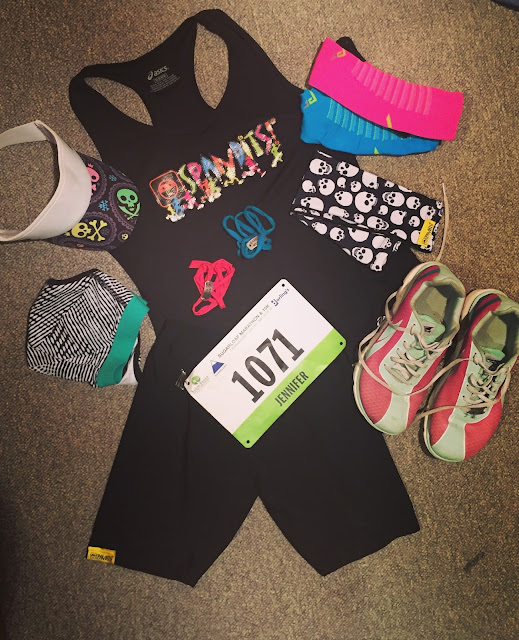 Sadly, Ward got the death cold 2 weeks before the race.  I avoided him as much as possible...... then Izzy got it.  I knew it was too late and I had already been exposed.  Monday before the race, I came home from school with the worst cold ever... and felt it in my chest, like a brick.  I knew exactly where this horrid cold was going....bronchitis.  So I used the doctor app on my phone, had a video chat with a doctor and got the meds going early.  By Friday, I was sorta better.  No fever anymore.  But not a 100%.  I consulted with my dr friend and she said I could run if I  didn't have a fever, but not to push it.  I was good with that!

But I hadn't run all week.... I was nervous I wasn't going to be able to breathe.... so Saturday morning, Francine and I met up for a couple of miles.... just to get the body going again and see how we both felt.  It felt great moving again!  Thank goodness for SOS Rehydrate... keeping the fluids going ALL week, and even more so just before the race!!!!  Hydration at it's finest with the BEST electrolyte drink around! 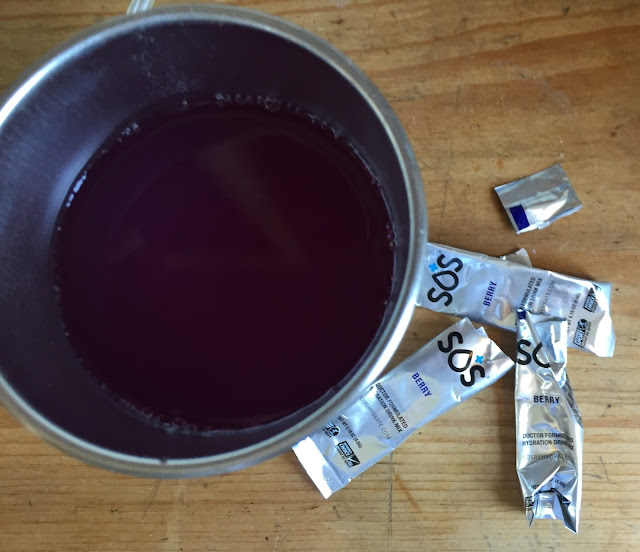 I packed up my race stuff...with multiple outfit changes because that's how I roll.  Lots of ProCompression and Spandits options.   As you can tell - Two Pair Don't Care with ProCompression Elites won, with my Spandits arm sleeves and abyss boardie shorts and Spandits singlet, Altra One2.5, and Headsweats skull visor.  I HAVE to look good! 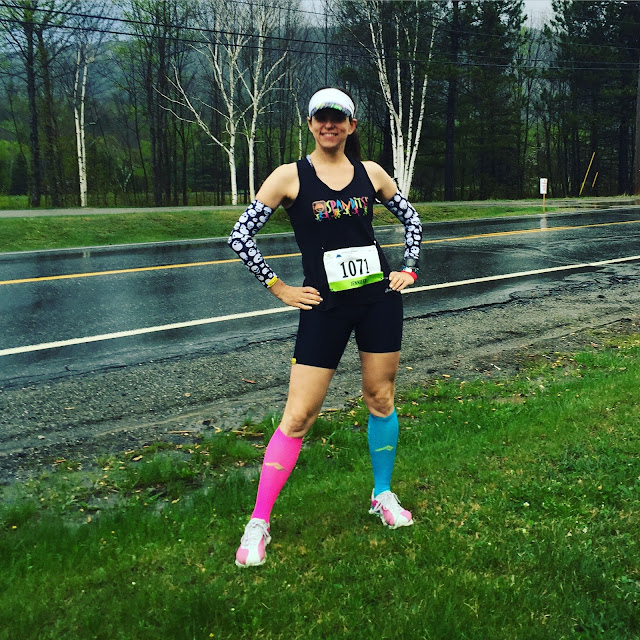 About 4:30 AM, a rather bright thunderstorm rolled by and woke all of us up... an hour early.  After that craziness, none of us were going to sleep anymore... so we got up and got ready.  Checking the weather...making sure the thunderstorm was gone.  The weather app was saying we were in for it.... and we were a bit nervous.   We didn't want to take the shuttle down and have to stand in the rain for an hour, so we drove to the start and sat in the car until just before the race start.   That's when it started to rain harder....

It actually rained quite hard for the first half of the race.  But then it stopped and it was actually comfortable running weather.  It was an automatic PR for me anyway, as I've never done a 15k before, but I wanted a strong race.  The first half, seemed SO easy.  But don't they always?  With 3 miles left, I felt the wheels coming off... but held on.  I started feeling dizzy at times, my legs felt fatigued, but I told myself I had to suck it up.  If I thought I was going to be running 2 more marathons this fall, I needed to learn how to push pass the pain and fatigue and go.

Keep in mind, this was only a 15k.... not even close to a marathon.  But the mental game is still there.
So I powered on.  And somehow pulled it off.

I loved the warm chicken noodle soup at the end.  A great touch!

The only little snafu was the timing.  Something went a little crazy at the end.... and we went from 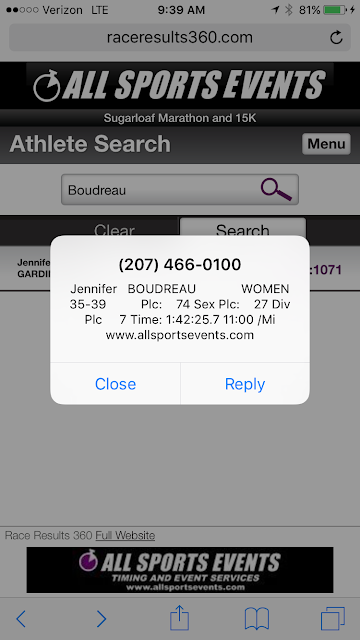 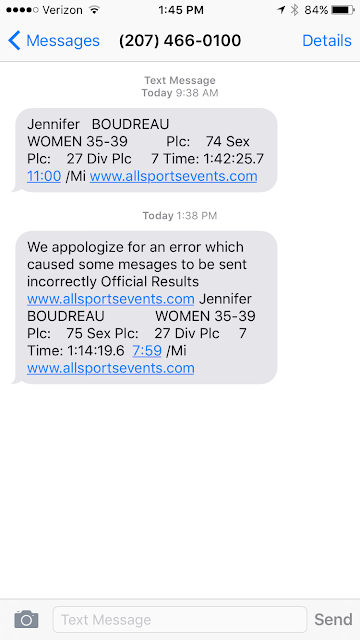 But oh wait... my apparently my friend, Amy, is a super-elite runner... because this was her time.  For a bit.  Until the race timing company fixed it. 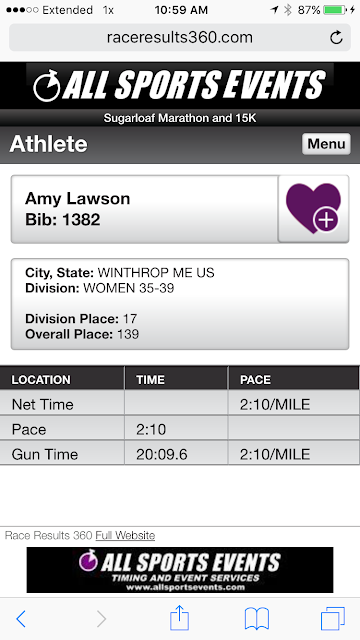 However, all in all.  Sugarloaf 15k goes down as top race in Maine.

and thank you to this guy and all of the Maine Running Photos photographers who braved the weather.... and took excellent, free race photos for the runners!