- November 23, 2016
One of the longest days of my life has definitely become one of my favorite experiences.  Two weeks later, I'm still thrilled to have completed the New York City Marathon.   My 8th marathon. 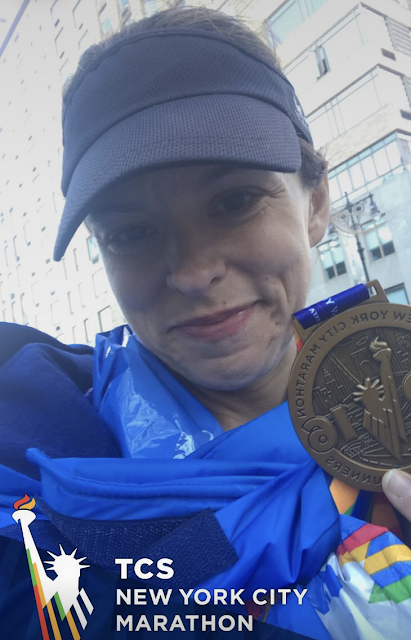 From the day I interviewed to be part of the Miles for Miracles Team, my NYCM experience was always going to be a fun marathon.  I never intended it to be a PR race.    And I believe I completely lived up to my expectations.   This marathon was by far, my most favorite marathon.
Marathon morning started out at 3am with a surprise time-of-the-month call (a week early), which sent me almost into freakout mode.  A quick google map search revealed there was a 24-hr CVS 0.2 miles from the apartment.  Very freaked out, I grabbed my pepper spray and credit card and sprinted there and back.  After that, there was no going back to sleep, so I got myself ready, ate my oatmeal with pb and maple syrup and stretched. 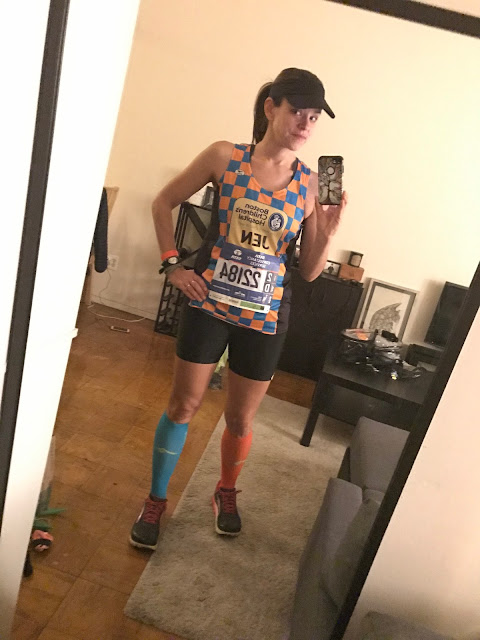 Just after 5, I received a notification that my Uber driver was enroute, so I headed downstairs and waited.   Moments later, he arrived and whisked me off to Central Park.
I found the Boston Children's Hospital busses in no time.   The bus ride took a little over an hour, but it was definitely the way to go.  I didn't have to navigate through NYC or freeze outside for hours.  Instead I was in a toasty bus that had a bathroom.  Not a bad way to arrive. 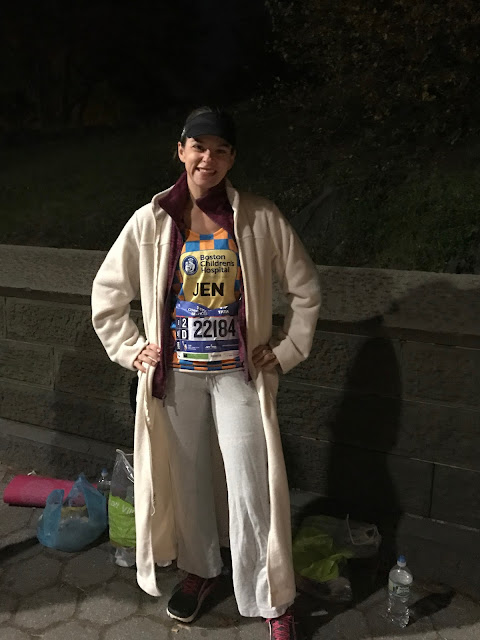 When we were crossing the Verrazano Bridge, pre-race nerves were starting to hit.  I was really going to be running a marathon number 8 in just a few hours. 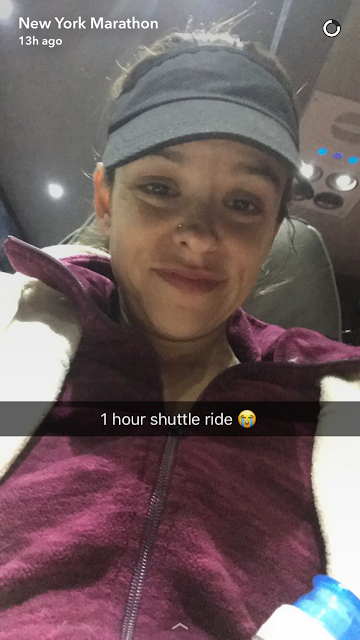 As we got off the busses, the Boston Children's Hospital coaches gave us the warning the the security line was long and crazy, but to stick together as much as possible.  I was only able to stick with one other runner on the team.  Thank goodness I had her with me. 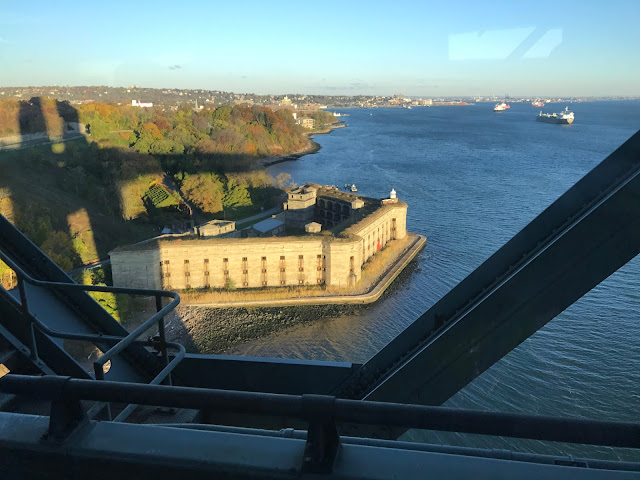 After we passed through security, it took us a few minutes, but we found Charity Village. 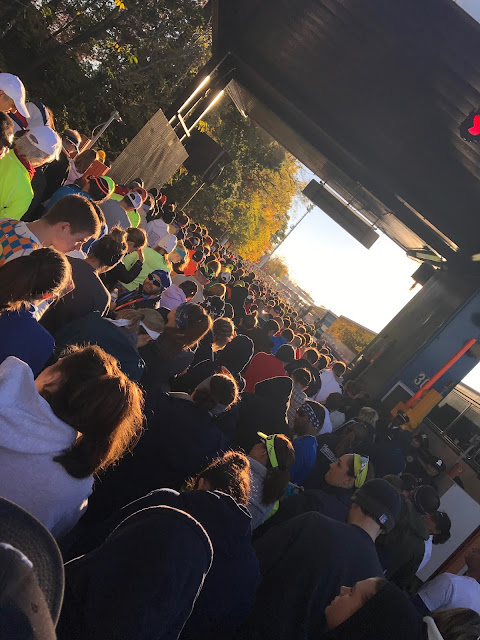 Seriously.  This is the way to go.  A private village area, with a heated tent, port-a-potties just for Charity Village and our own coffee/tea/bagels. 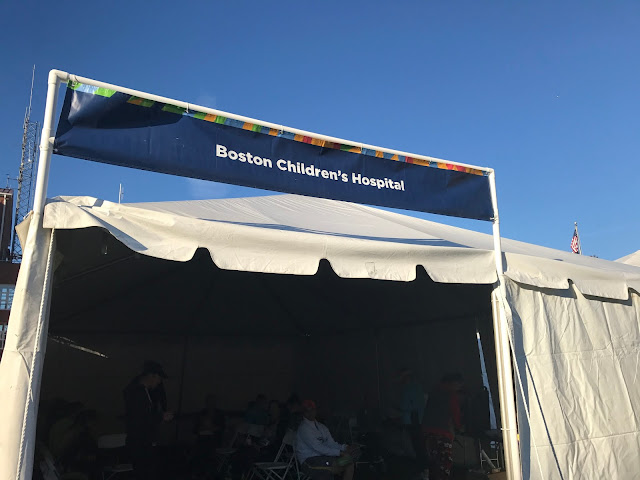 Not that I had any, but it was a very nice touch!

Our coaches had us do a group stretch/warm-up then we took a group picture and sent us on our way to the corral. 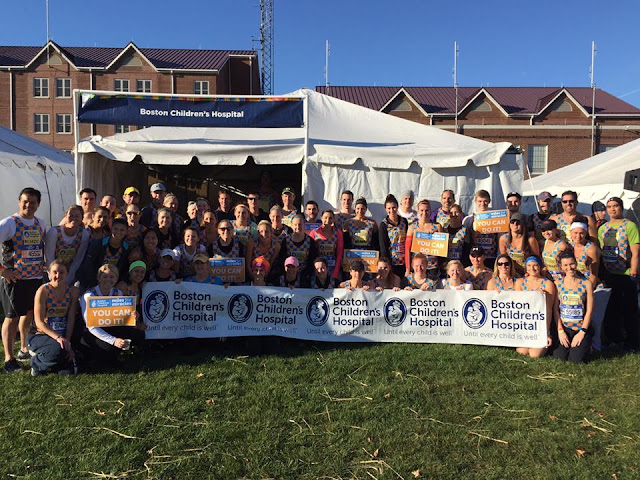 Seeing the crazy amount of people in front of me, was super exciting.  Seeing that the last marathon I ran had maybe 300 runners, this was quite a different experience! 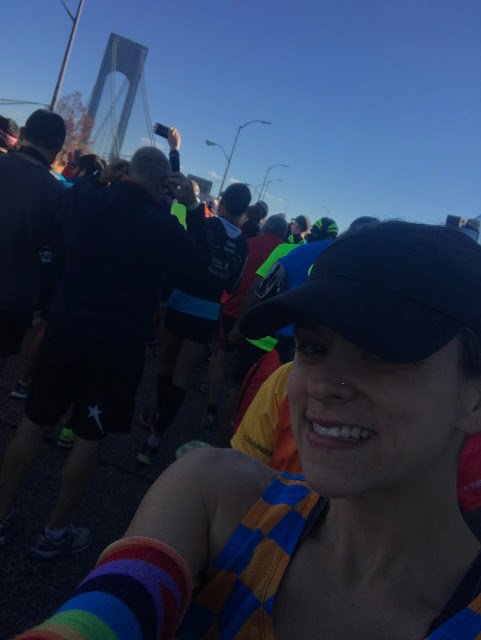 After the cannon went off, there was a little walking and then that walk became a jog.  I didn't have my Garmin with me.  I also did not bring my iPod with me.  I made a promise to myself I was leaving it in Maine.  And I did.  It was rather freeing to not know my pace.   I did try to keep track of it for a bit with the first few miles.  But eventually I stopped caring and stopped paying attention to the race clocks.   I knew the day was going to be a long one and I wanted to enjoy every single step.  So I did! 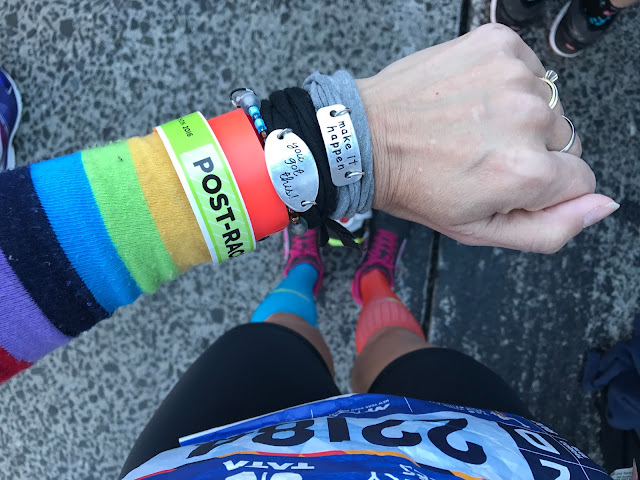 Running across the Verrazano Bridge was a crazy experience.  Seeing all of the NYP helicopters cruising around was pretty cool sight.   The first part of the marathon, there are three different routes, and seeing the other groups for a bit and then seeing them pull away was a really odd experience as well, but I understand for sure.  That huge amount of runners going through a narrow part of the city would pose some problems. 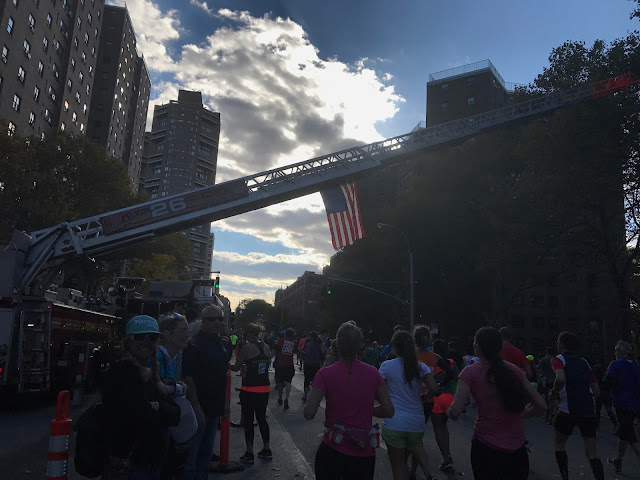 I will note that not once did I feel super crowded.  I felt as though I had plenty of space to run my own race and take in all of NYC I possibly could. 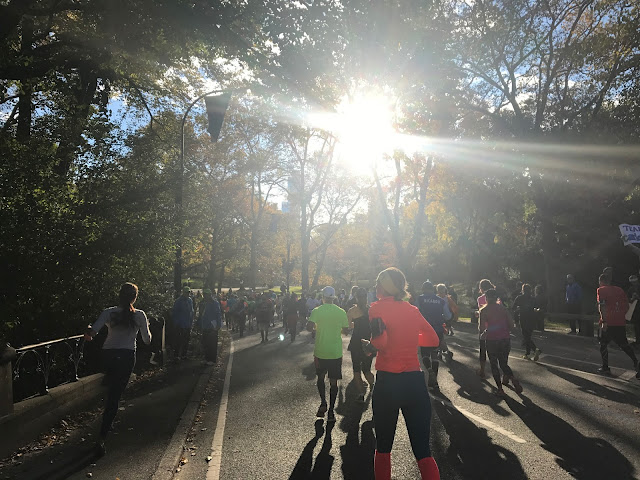 When you entered each borough, there would be a marathon sign welcoming you to that borough.  But you didn't really need those signs because the crowd definitely told you where you were!  From the signs, to the cheers, to the live bands, it was a crazy amazing experience!    I knew I was in Brooklyn for sure when I heard No Sleep Til Brooklyn blasting. 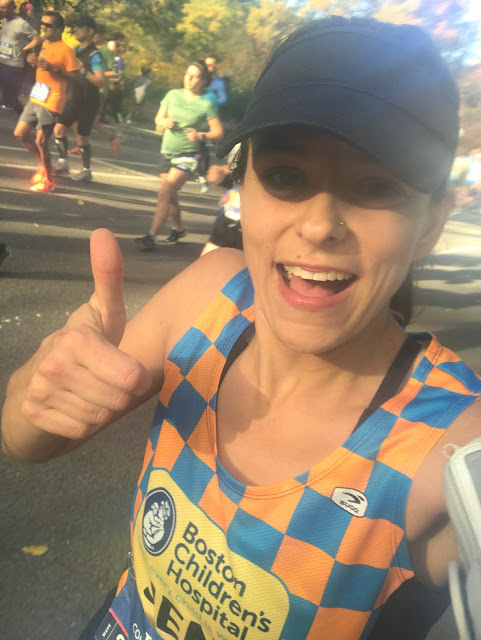 The live bands.  I seriously lost count of them.  There were so many of them, playing so many different types of music.   Sometimes when they weren't playing music, they were cheering on the runners by name.  Making the runners, well, at least me, feel like a rockstar. 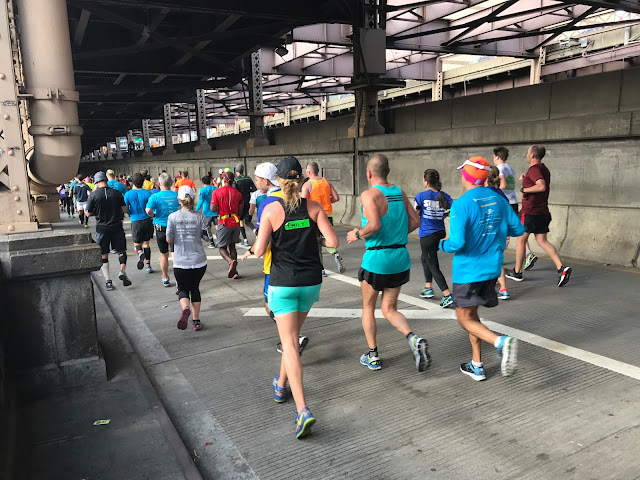 Running in a singlet for Boston Children's Hospital definitely had it's perks.  While it was a fun singlet that had a place to personalize it .... so I did!   I heard countless cheers for "Go Jen!"  and sometimes "Go Boston!", "Boston Strong!" or "We love Boston Children's Hospital!"   This happened throughout the entire race.
I loved experiencing all of the different cultures of NYC - from the way people dressed, to the music they played.  All of it was overwhelmingly amazing. 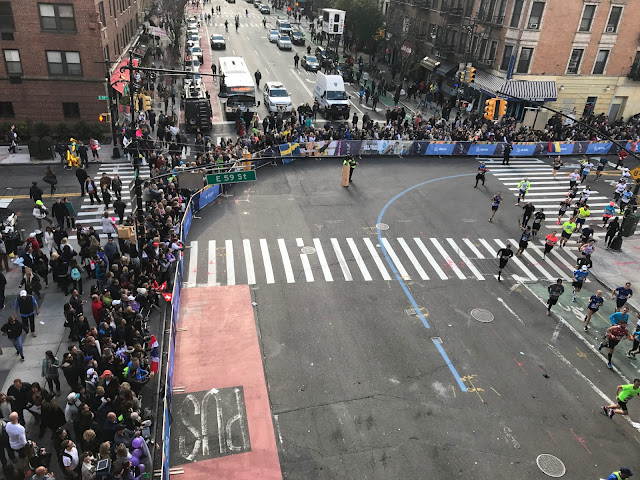 I knew Ward and the kids were going to be at mile 17 and I was hoping they would be wearing the orange patient partner shirts that were sent to us, as Tucker was my patient partner for this marathon. After I crossed over the Queensboro Bridge, which was the only quiet part of the entire race, I was at mile 16, so my search for my family was on.  I must of looked like a crazy person with a swivel head, scanning the crowd for my family.  After the sponge station, I spotted them and made a beeline over to them and hugged each of them.  It was then, Ward said we'll see you at mile 24.  Which was a change in plans, but made me SO happy!   So off I went, for another 7 miles.  7 SLOW miles. 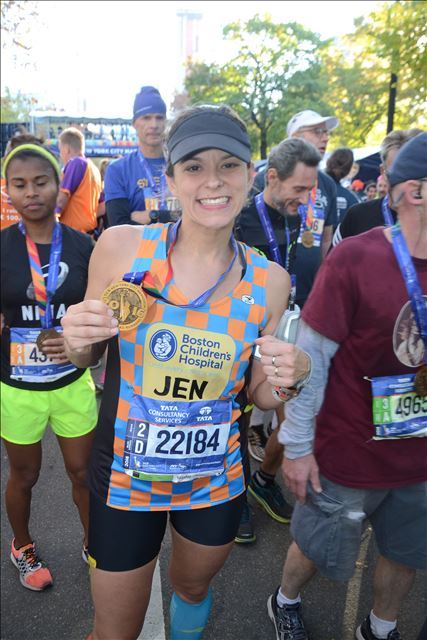 Shortly after my family sighting, I saw the Boston Children's Hospital crew!  So cool to be part of a team.   They really know how to make team members feel special during the race!   Love them!
The next 7ish miles were rather slow for me, but still amazing.  I was soaking it all in.  High-fiving as many kids and adults as I could.  Chatting with runners as the miles passed by.  Walking whenever I felt like I wanted to.

Then, just like Ward said, at mile 24, I spotted my family in Central Park!  Of course I ran over to them and gave them more hugs and kisses!   Ward shouted to me "see you at the finish!" and I was off.   Running through Central Park was a like a dream come true.  Everything I had hoped it would be.   The winding road, the pigeons, the crowds.  All of it.  So freaking cool.  Then it happened, I saw the finish line and my NYCM marathon experience was about to come to an end.  But then it happened.  Out of ALL of the people running with me, the announcers called my name as I crossed the finish line!   That is one finish line announcement I will remember forever!

After I finished, received my mylar blanket, then my medal, then my food bag, I walked for what seems like forever until I entered the poncho area.  And then another mile until the family meeting area.  Of course, B was at the FAR end of the family meeting area.... so I had another long walk until I finally found my family!   By then, the hunger was setting in.  But first we stopped and I put on some warm clothes and then Tucker confiscated my poncho. 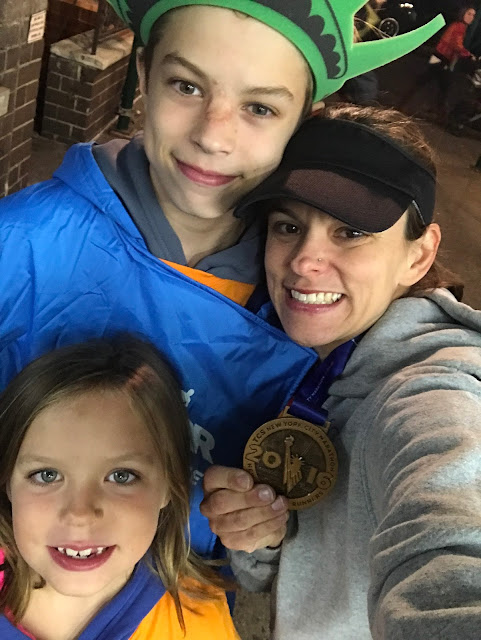 We found a great little bagel place and I finally enjoyed my first NYC pastrami sandwich while the kids had more bagels.   Then we caught a cab back to the car.  Then around 12:30 AM we were finally home! 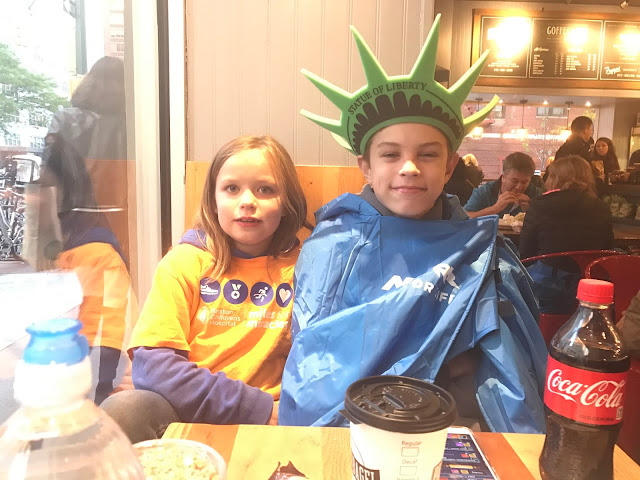 I decided to stay home and sleep the next day, seeing that my marathon day started at 3AM and ended about 1:30 AM (because the house was freezing, so I had to make a fire before I went to bed!). 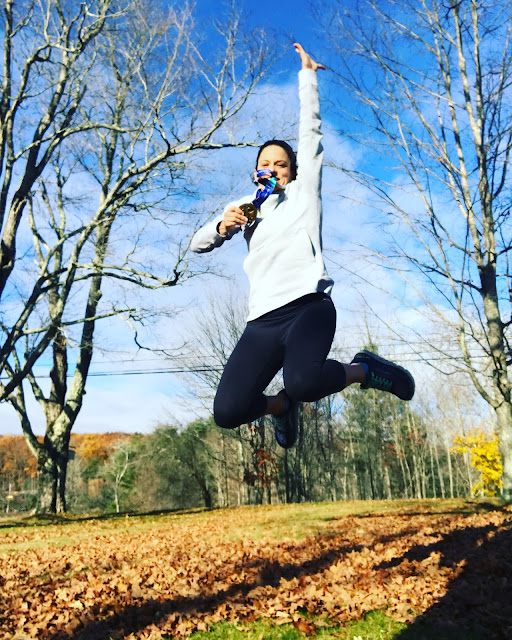 But I'll tell you what, I felt great the next day!  Perhaps running a marathon for fun is what I should have been doing all along!
There you have it!  The NYCM recap.  My 8th marathon.  My most favorite marathon to date.
And now, I think I'm going to take a break from marathons.  I originally said no more marathons.  But Ward reminded me that I'm an addict.  So, I'll just say, I'm taking a break.
#MilesForMiracles #NYCM marathon altra Boston Children's Hospital Headsweats Honey Stinger NYCM Marathon procompression race recap SOS Rehydrate Spandits