Showing posts from September, 2017
Show all

As I neared 40, I began noticing changes in my body.  I was gaining weight regardless of my meal choices.  It was frustrating.  I began to dread turning 40.  Never mind the eye creases that were beginning to appear as well.  But that's another story!

I was super concerned about my metabolism.   What on earth was wrong with me?  I've heard some women say "my metabolism crapped out at 40".  Ugh! NO!    When I spoke with my doctor about it, she just said watch what you eat and exercise.  Gee, thanks, doc.  I already do that!

When I had the chance to try out an EverlyWell Metabolism test, I definitely raised my hand.

The test itself arrived super quickly to my house.  I read the directions and I was supposed to do the test first thing in the morning after only being awake for a short amount of time, and only after drinking water.

This part maybe was the hardest part for me because I would get up, drink green tea, grab the box and smack my forehead!   Ugh!  I …
Post a Comment
Read more 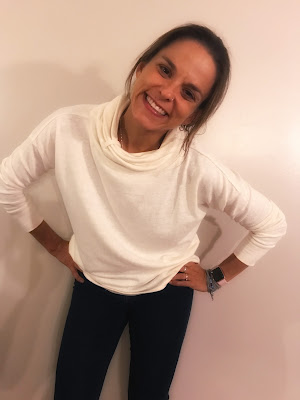 I received two items of clothing from prAna to review.   All opinions expressed are my own.


A gorgeous beautiful time of year.  The trees begin to change.  Nights are cooler.   I freaking love fall.    I'm back to school.  Structured days.  Crazy busy.  Teaching all day, coaching in the afternoon.  Then getting my kids to where they need to be - soccer games, soccer practices, dance.   But I absolutely love it.


In addition to the gorgeous clothing, prAna makes, they focus on making sustainable clothing.  prAna makes clothing that is Fair Trade and uses recyclable materials and hemp.  Doesn't that make you feel good?  I know it makes me feel good about choosing prAna!