- February 08, 2018
I'm not a winter person.  I've never learned how to ski, ice skate or snowboard.   They never appealed to me.  BUT the one thing I DO love about winter is snowshoeing.

Add snowshoeing and running together and I'm in love!  For me, snowshoe running is a fun way to break up the year of running.   Last year I completed the Bradbury Snowshoe Series and had an absolute blast.   Signing up for the series this year was an absolute no brainer.   I'm pumped I got in.  While it's no surprise, I don't really enjoy running outside in the winter.  I DO love to strap on my snowshoes and go for a run in those.

A couple of weeks ago the 1st race of the season took place at Bradbury.   This one was the Squall, which is the 3 miler.   I'm not very good at memorizing races on trails.  All of the twists and turns just blur together to me.   Thankfully I'm not going to be in the lead so I don't really have to worry about it too much.   I usually try to make sure I have someone in front of me to give me the visual as to where I'm going.... that strategy works great for me.   Most of the time.   Unless the person in front of me takes the wrong turn.   Then, that's my mistake for just following along and not paying attention.

If I remember correctly, last year, the race director and his crew of awesome folks who help out in prepping the course had to actually shovel snow onto the course.   I was nervous that my first snowshoe race was going to be a winter trail race.  BUT.... we did it in snowshoes and it was so much fun.  My time last year with so little snow was 42.13.

Fast forward to this year.   A year that I've said "nope, no way, I'll just stay inside and enjoy this Netflix series" instead of getting my butt outside..... and then a back injury that had me laid up for nearly a week.   I broke out onto the snowshoes for a mile prior to the race a couple of weeks ago and felt like I would be "okay". 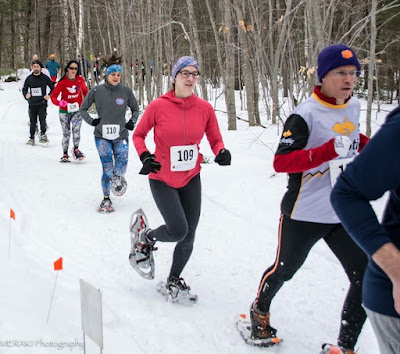 We got some new fluffy snow just before the Squall this year and the facebook video preview said race conditions were going to be "perfect".   Which was exciting and nerve-racking at the same time. The pressure!  What if I fell apart with perfection conditions?  I would be so hard on myself!

Race day came.  Ward and I headed down to Pownal for the race.  The day was absolutely perfect. Mid 30's.   Sunny.  Seriously.  In Maine in January, you can't ask for better weather. 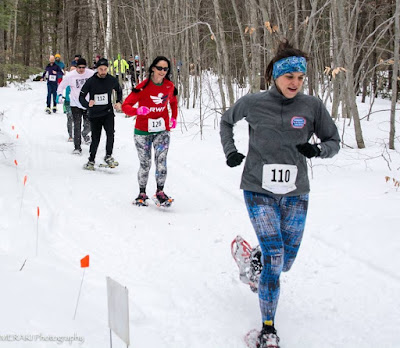 The race started off well.  I knew that if I didn't get myself out of the pack I would get stuck on the single track.... so I went out too fast.  Like usual.   But when I got to the single track I was able to settle my breathing and take in the beauty.  I do love running at Bradbury.

Nearly a mile in, some people in front of me made some loud noises and I looked up just in time to see a FREAKING DEER run across the trail.   And then of course I let out a yell which was then followed by looking for more deer to come out of the woods.  I didn't see any and prayed there were none, so then I proceeded.   Holy crap!

When I finally came out of the last part of single track, I saw Ward standing there.  Which partially made me mad because he's so damn fast and had probably been standing there for a long time..... but mostly made me happy because I do LOVE seeing him and I knew I was almost done.   From there I pushed hard to the finish and boom I was done! 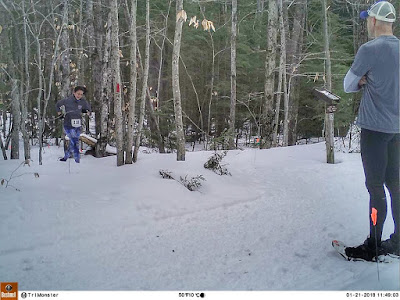 I hit stop on my Apple Watch and never bothered to go check where I was in the results.  I knew I didn't place and just wanted to enjoy the fact that I was running pain free and had a great time!

I met up with Alicia at the end and we finally got a selfie!   She's a fun one on Instagram. 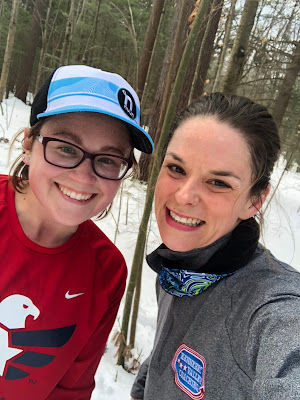 Then Ward and I headed over to the food area to get some delicious butternut squash soup and to hang by the fire.   Ward had finished 1st in his age group so we had to stick around for his prize.  He's a smart guy and picked out the six pack of Baxter and a pair of socks.  I don't have to run fast if he will take care of me like that. 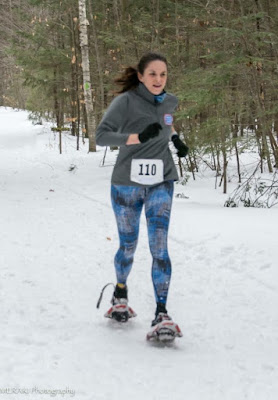 As soon as we could, we took off to get home and shower because it was Izzy's birthday party day and we had to host a party!  Why not hold a birthday party on race day?   After the party I was able to bring myself to look at the results.  39:13.  Which was exactly 3 minutes faster than my time last year (42:13).  I'll take it!   And I'm definitely looking forward to the Bradbury Whiteout 4 miler THIS Sunday (and we just had another storm... so I am hoping for a great run again!).