- May 13, 2011
Remember a few weeks back when the Mr. Fox came and took (ate) away 6 of my "girls"?  I was completely devastated.  I really was.  I raised those girls from chicks and they followed me around outside. Of course they weren't really following me around because they love me.  They were only following me because they knew I fed them, but it was still cute.  Plus, I was getting some awesome eggs from them.  Well, sadly, Mr. Fox chose the "good" egg layers and left me 4 of the not-so-good egg layers.  I couldn't get rid of the remaining girls, because they were still my girls!

I went back and forth with what I was going to do.  Was I going to get more chicks and start all over?  This would mean raising them in the basement until it got warm enough and then have to wait until the fall until they start laying?  OR scour craigslist for some egg layers.  I chose craigslist.  I'm impatient.  We found a farm not too far from here who had tons of hens and sold us 6 for $5 each.  Unfortunately, one of the new girls did die in the first week.  I'm thinking it was the stress of the move because the other girls have been very healthy.  We kept the two flocks separate for 1 month, as it is recommended.   We didn't have two coops, so we just kept the new girls locked in the run (fenced in area which was covered with fencing on the top as well).  Ward put in a long stick for a quick roost and I put some metal roofing ontop when it rained and ta da, we had a quick make-shift coop.  When I let the original girls out, they would come over and check out the new girls.  This helped quite a bit.

Fortunately, I am married to a talented builder who can build anything out of practically nothing.  I wanted two separate coops so each flock could remain a family, but also allowing for them to go outside together during the day.  Ward had some extra windows in the barn and had plenty of wood, so he whipped together two super cute coops.  They are small, but adorable.  At some point, maybe this summer, I will paint them.  I'm thinking barn red.  What do you think? 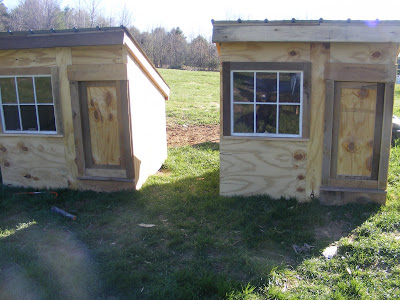 Moving the new coops from behind the barn to their new location was a challenge, but Ward rose to the occasion and did it.  Of course he had tons of support from the rest of us. 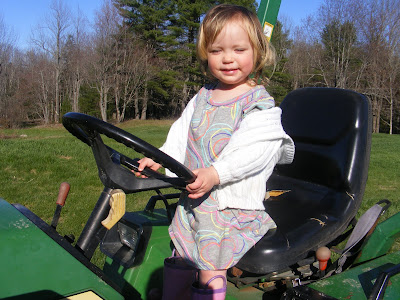 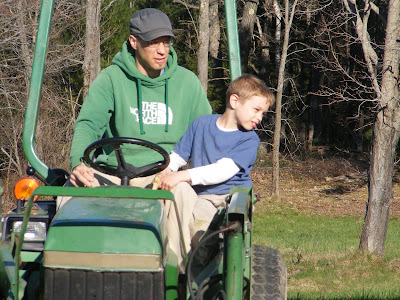 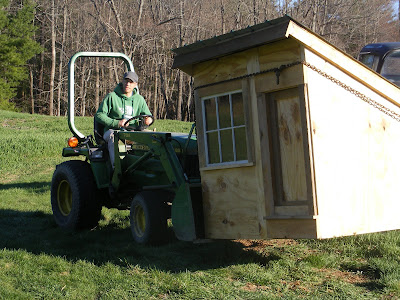 Anyway, we sold the old coop through craigslist to a lady down the road.  Getting the old coop to her house was another challenge in itself.  Thank goodness for Wade because I was useless with that one. 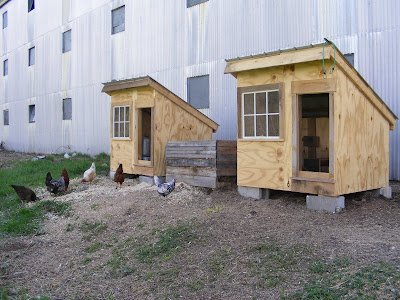 I’m thinking the girls are liking their new houses because they have been laying more eggs than we can handle.  I actually sent out an email at school in search of any buyers of my eggs and had an overwhelming response!  I sold 4 dozen today with another 5 dozen on order for next week.  Perhaps this will be my new part time job?

PS - We do have a plan to build a very tall fenced in run between the two coops to allow for the girls to get out and I don't have to worry so much about Mr. Fox or his family coming to visit again.  Of course we'll have to slid the coops apart a bit and move the compost bin, but those moves are incredibly minor compared to the coop moving adventures.  For now, I only leave the girls out to roam when we're home and we're going to be home for the day.  My hope is that if we're here and there's a dog/human presence, the chances of a fox or other predator coming to visit will be reduced.
chickens Eggs Izzy Tucker Ward