- June 27, 2011
I have officially completed 3 half marathons!  Woo hoo!  I remember training for the first half, I thought 7 miles was a long distance.  My have things changed in less than a year.

I was super excited about yesterday's half because it was on "home turf".  But this time we started in Augusta, ran through Hallowell, Farmingdale, turned around in Gardiner then went back to Augusta.   I made some changes to my racing plan in the morning.  I decided to not bring my Camelback.  Well, Ward suggested that I not bring it and I agreed.  But not bringing it did pose a problem.  Storage for my snacks.  I had planned on bringing Sharkies and Sportbeans.  I didn't want to pin both to my shorts because the bags can be quite cumbersome.  At the last moment, I decided to pin the Sportbeans to the inside of my shorts and put a blueberry (w/ caffeine) Gu in the little interior pocket of my shorts.  I’m thinking this is what did me in.  My stomach started feeling a bit queasy around mile 9 and it didn’t get any better for the rest of the race.  I felt sick for a majority of the day and didn’t really feel normal again until this morning.   I haven’t even tried Gu with caffeine before.  Why did I think I was going to try it in a race?  Not a good move.

The race actually started at Fort Western in Augusta.  I must say I was a bit (okay, incredibly) disappointed with the start.  The director gathered the runners around the flag pole and went through the rules of the race, locations of water/gatorade/port-a-potties, etc.  Then went into the National Anthem.  Before runners could head to the starting line, where ever that was - the cannon went off.  It was insane. All of a sudden there were 200+ runners shocked that the race had started.  I could be wrong here.  Maybe there were 10 lucky runners to have made it to the starting line before the cannon went off, but I seriously doubt that.
Anyway, I'm totally blaming the horrible start for my first mile.  As soon as Jess and I got to the bridge, I looked at my Garmin (which thankfully I got it ready prior to the National Anthem), I saw our pace was 7:03!   I totally knew I wasn't going to be able to keep that pace for the 13.1 miles.  Our first mile was 8:03.  Too fast.  The pace for my 1st half was 8:45 and the 8:27 for the 2nd.  No way was I ready for 8:03.
I did have my iPod with me, but never turned it on.  Jess and I stayed together for a majority of the race.  She did leave me around mile 9 and that was totally fine.  I kept her in my sights for the rest of the race and that pushed me enough.  It was around that time that my Garmin also decided to reset.  What the hell?  I totally lost track of my overall time - so I was running "blind".  I opted to just turn it on again so I could monitor my pace.
Because the race was close to home, it meant that Ward and the kids - my personal cheering squad - met me along the path a few times.  It was such a great feeling to see them each time.  My dad even came to take pictures and cheer me (us) on.  He showed up on the Gardiner end and then I saw him again at the race finish.
Along the course, I also got to see my friend Sue, Jess's husband and kids, and Jill's husband and kids.  I have got to say my favorite part of the race was going down the big hill in Hallowell and seeing Joe, then Wade, then Ward drive by - honking their horns and cheering out of the windows and then seeing my husband getting yelled at by the police officer who was directing traffic because Ward wanted to wait for me to get to the cross and the police officer was NOT having it.
While it felt awesome to have such a huge support team at the race, I felt horrible for Stacy because her family wasn’t able to make it. 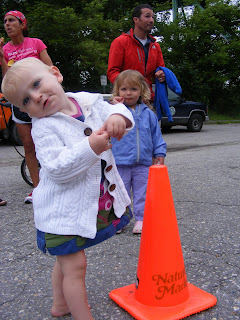 Here’s my niece, Scout.  She really enjoyed moving the cones around.  Perhaps she can be in charge of a race or two in the future.
Aside from the shitty start, I will note that half marathoners did not get medals at the end.  Maybe I'm spoiled.  I don't know.  But I was really hoping for a finishing medal like the past two half marathons.
half marathon Race Recaps