Saturday was the OHD 5k and I did not run for a couple of reasons:
- I think I should concentrate on my marathon training right now - weekend 5k's really mess with my long run schedule.
- It was my turn at kid duty.  Sometimes we ask the in-laws to take the kids, but we don't want to do it all of the time because really NEED them to take them for the Beach 2 Beacon 10K coming up in a couple of weeks and as I said before, Ward had a minor surgery the day before the race last year so he had to sit it out.

Ward and I have run the OHD 5K for a few years now.  My brother-in-law and sister-in-law actually ran the race when it was a 4-miler on the rail trail.  Now it's a 5K and the course has changed a few times.  It's still hilly, there's really no avoiding that unless they choose to reverse the run.  Maybe they'll do that next year?  One can only hope.

Hallowell is a beautiful little town between Augusta and Gardiner along the Kennebec River.  The girls and I run through Hallowell when we're doing our long runs on the rail trail.  I wish we lived in Hallowell.  Actually, the first time we ran the 5K, when I got to the finish - totally not winded at all, I told Ward I loved the race because the houses were all so beautiful.  He told me that I obviously had a lot more to give in a race.

I have to admit, when you've got the running bug, it's hard to go to a race and not run it.  But, I brought my camera and took tons of pictures.  I know the race has been covered by Martha Thornton in years past, but I wanted to make my own contributions to other runners as well.  I completely enjoy coming home after a race and going through the photos posted on Maine Running Photos - so this was my turn to share.  By the way, I came home later on that night after celebrating Tucker's birthday party at the cottage and downloaded all of my pictures and sent them off to Maine Running Photos on FB and guess what?  I am now one of the admins for the page and I can share my pictures again in the future.  How awesome is that?   AND one of my photos is on the results page on coolrunning.com.  Sweet!

Anyway, Izzy, Tucker and I got to the race just before the starting time and met Ward and the guys.  They had just come back from their warm-up run.  They were running as a team this year - The Old Goats.  Not sure where they came up with that name, but oh well. 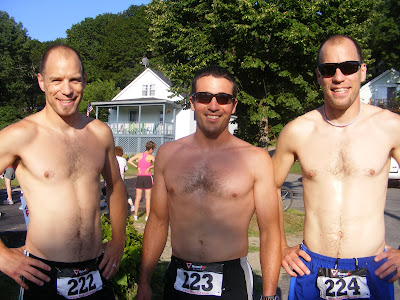 We left Ward a few minutes before start time so I could get in a good spot for pictures and one that allowed me easy access to walk up the hill a couple of times.  The way the course is laid out, I got to see the runners three times, which is a lot of fun. 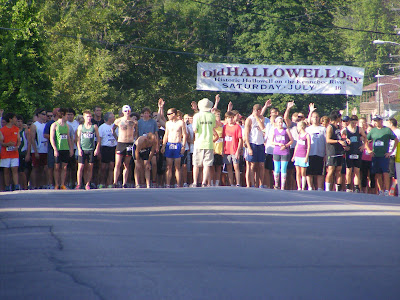 When I got into my spot, a professional photographer stood beside me.  I had a bit of camera envy going on for sure and vowed that one day I will get a nicer camera.  For now, my Fuji Finepix is totally working for me.

Ward, Joe and Wade started off in the front and looked strong.  I was hoping they continued to run strong for the entire 5K but was having some doubts because Ward and Wade had been sick all week with a horrible summer cold.


Old Goats also won for the male team.  BUT they did not walk away with a prize.  The organizers accidentally gave away their prizes earlier during the raffles.  That part made the guys (and the wives) pretty upset.  The organizers said they were going to mail the prizes to the guys.  We sat around for at least 1 hour (maybe more - I just don't know anymore) after the 5k waiting for the results and they gave away the prize. Really?   I felt bad for Wade because that was his chance to win a mug.  Poor guy. 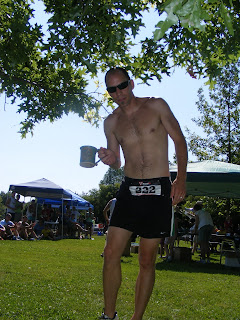 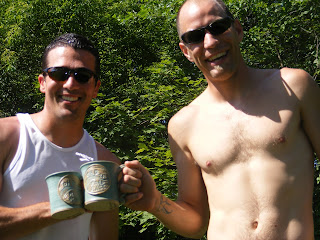 Remember me saying how hard it was to sit out?  The worst part was that I would have totally won for my age group and Jess would have won for her age group as well.  We were both completely bummed when the organizer announced the winning times.  The unfortunate part is this is the last year we'll be in different age groups for a few years.  Ugh.