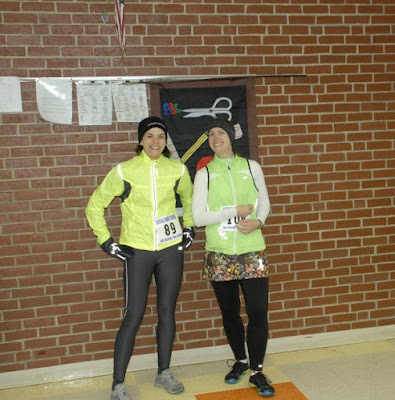 There were approximately 31 runners who braved the cold and icy conditions to get out and run this challenging loop.  Registration took place in the Belgrade Elementary cafeteria and that is where everyone hung out before the race.  Carrie and I did get outside and did a 1/2 mile warmup, but quickly returned to cafeteria to stay warm. 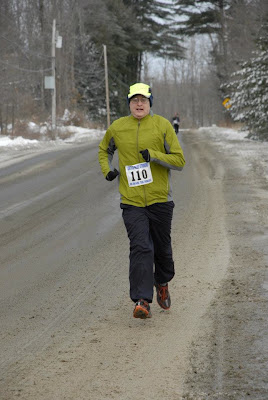 I got the chance to meet Harold, another Maine blogger at the race as well.  Read his post about today's race.  This man an inspiration to me, he was told he was never going to run again, but look, here he is.  And today was his re-entry to the racing world.  He hasn't run a race since 1986!

Just before the race started, I gulped down my Zipfizz because I really wanted those magical powers to help me out today.  Then the race director made the announcement for us to get to the starting line, so hesitantly, we got back outside and lined up.


What I wore
I was so excited to be sporting my new Sugoi jacket I picked up at TJ Maxx last night ($40), and new gray midweight tights ($13 clearance!).  I was also sporting my new L.L. Bean Cresta shirt, Tommie Copper Hat, Wright Socks Merino, and Under Armor Winter running gloves (you know the ones with the little fleece spot to wipe your nose - and I used it a lot today.  The gloves are in the washing machine as I type this.)  I was definitely comfortable for the race in my choice for running gear today.  I also chose to not race with my iPod.  A first for me.

Last year I ran this race for the 1st time.  If memory serves me correctly, it was about the same temperature but the road conditions were a lot worse.  We had gotten hit with a sizable blizzard the day before.  Yes, we had a storm this week, but it was on Thursday, so the town had an extra day to get the roads cleared.  The only extra challenge today was with that storm, we had bouts of freezing rain and hail.  As you probably can imagine, there were some slick spots.  But again, nothing like last year. 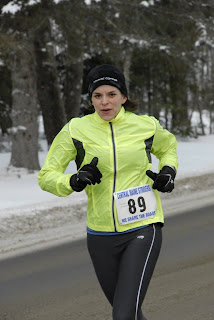 I went into this race just hoping to do better than last year (37:16).   Normally, I will rest for 2 days prior to a race.  Even a 5k.  But, I couldn't really go and do that with my January Streak going on, so I did settle on doing 1 milers on Thursday and Friday. 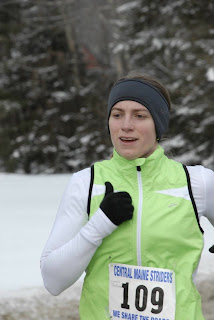 Start of January Thaw Race - Video #1 -  I love this one because it captures the laid back charm of a small town race & I love that David followed the runners in his car and video taped us.  You can totally spy Carrie & I coming up because we're sporting our awesome yellow gear!

All in all, a great, fun race.   I love the small community races we have in Maine.