- February 06, 2012
Yesterday morning, I rolled out of bed and felt a bit warm.  Staggering to the medicine cabinet, I reached for the thermometer and took my temperature.  103.  Really?  No way.  But I have a race today.  Can't it wait until after the race?  I took some ibuprofen and dayquil and hoped for the best.  I didn't feel horrible, so I decided I was still running the race just not racing the race.
Jill, Stacy, Carrie and I drove down to Cape Elizabeth together.  We arrived at Cape Elizabeth with plenty of time to make bathroom stop #1.  After that we found Joe and Jess and hung out for a bit and then we went back to the car to get ready. We did have time to squeeze in another bathroom stop (and did not have to resort to peeing behind any trees!).   After that we met up with Sara and walked up to the starting line. 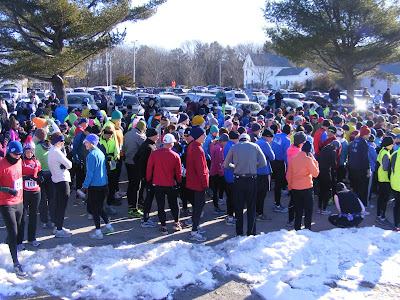 After this we went out the starting line.  It was about 20F, with a slight breeze and sunny. We haven't had snow in what seems like a long time so the road conditions were great.  There was gravel and dirt on the side of the road from sanding, but that is nothing.

Ward & Wade drove down separately with the kids.  I love seeing them at the start of the race!  They are actually standing on a little strip of (dead) grass.  When we got to them there were runners whizzing by them on both sides.  Part of me wanted stop and protect my little girl.  I did not want her to get run over by any runners.  But she had her big brother and cousin there (and uncle) there to protect her!


This was the first running this race ever, so today's run was going to be an automatic PR.  That in itself was comforting.   Mile 1 was awesome - downhill.  I just went with it.  Then the hills came and they were never ending.  Sara was complaining about mile 2, but the hills at miles 7-9 were painful.  I thought they were never going to end.  Ever. 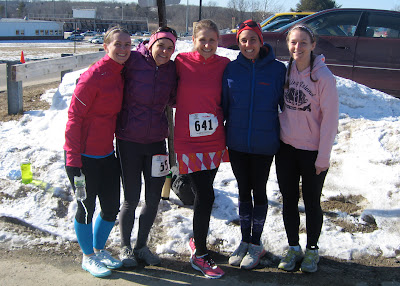 All in all, an awesome race/run.  Everyone came away smiling and we all PR'ed.
After the race, I felt tired but not horrible.  A bitty foggy.  But not that bad.  It wasn't until around 7pm last night that the fever came back full throttle and completely hit me like a truck.  Yuck.
Do I regret running yesterday? Absolutely not!   And I cannot wait to run the Midwinter Classic again next year.
Midwinter Classic