I've been obsessing about whether or not to run with my camelbak or not.  Mostly, annoying the crap out of Stacy and Ward.  Sorry guys!

Thinking back to the previous 4 half marathons - I've run 2 with and 2 without.  My first half was the Maine Half Marathon in 2010 and the goal of the race was only about completion and I don't even think I owned a camelbak at that point.


The next half was the Inaugural Race the Runways half last April.


I definitely remember running with the camelbak.  It didn't bother me at all.  No rubbing or chaffing and I had access to water/gu whenever I wanted.

The next half I ran was the Kennebec River Rail Trail half last June.  I did not bring the camelbak for this one.

I suck at drinking from a cup and running.  When we came to water stops, I had to walk and drink.  Which isn't a bad thing, I guess, but it annoyed me.  It was also not a great race because I thought it would be a good idea to try a different type of Gu during the race - one with caffeine in it.  Bad, bad decision.   However, I did actually PR at this one with a 1:49:09.  But I felt like complete shit in the race and for the rest of the day.


Next up was my spur-of-the-moment winning entry into the Midcoast Half last month.  I opted to run with the camelbak for this one.


Again, I walked away feeling great and had access to my water/gu whenever I felt the need.

As I type this, I'm getting the feeling that I should just run with the camelbak.  BUT, then I have a minor little "fashion" problem.   You see, Saturday is my 1st race as a Team Tough Chik girl.   The issue is that the camelback will cover this awesome backside. 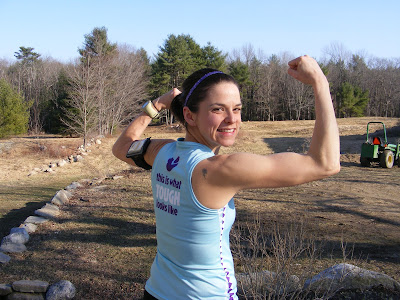 So, this is my plan (I think).  I'm going to just run with the camelbak.  I want to feel good in the race and for the rest of the day.  That really is most important to me at this point.   Fortunately the course comes back toward the hangar & I can definitely toss my bag at Ward around mile 10.  I know I can definitely survive the last 3.1 miles without water/fuel.  This is where I get a bit on the vain side - I want to be seen crossing the finish line - with This Is What Tough Looks Like on my backside.  Am I terrible or what?


Also, I thought I was going to be wearing this awesome skirt. 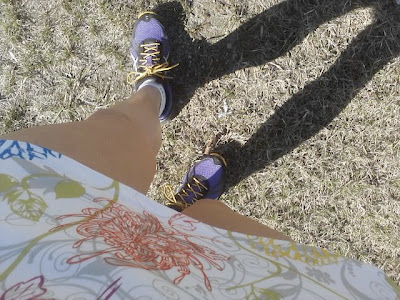 But now that I look at the temperatures for Saturday - I'm seeing 36 degrees at the start with a windchill of 27.  Hmmm......  even on super awesome days in Brunswick, the wind can be friggin' nuts on the base.  More on outfit selections tomorrow.  I need to rethink this.

So, what do you think?  Do I run with the camelbak?  Should I toss it around mile 10?  Would you toss your bag for the sake of great running photos and to not cover up an awesome shirt?