The Hardest Run Yet

- July 17, 2012
Sunday morning, Carrie and I met up bright and early for our 18 mile run adventure.   It's been rather hot and humid lately and we wanted to get the run done before it got too unbearable.

I lured Carrie to my house with the promise of Ward making us scones and having coffee ready when we arrived...and it worked.   Carrie met me at my house and in a few short moments we were off.  I had planned for Carrie and I to run a route in the more rural sections of Gardiner and Richmond, away from our beloved rail trail, mostly to add variety to our running and maybe a little challenge or two.  However, less than a mile into the run, the deer flies were eating us alive (even after a pause to apply insect repellent) so we aborted the plan and just ran down to the rail trail.   It was going to be an out and back, but we knew the route (very well) with the addition of running from my house and back to it - which did mean adding in some hills.

Here's some of the highlights:
- it was humid, the air quite thick
- we saw lots of runners, some whom we've never seen before, which was quite nice to see
- I had (lots) of tummy issues and visited the port-a-potties 2 times and hid behind some bushes another time
- I had great company
- we walked a hill that actually hurt to walk up the hill, there was no way were were running it!
- we looked smoking hot in our Tommie Copper shorts 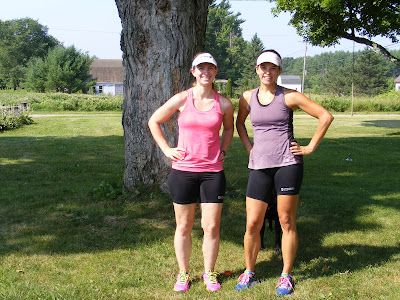 Finally, after 3+ hours, we rounded the corner by my house and saw my mailbox and Carrie took off in a spring.  Seriously?  She had that much energy left in her?  I wanted to crawl.   We headed in the house and devoured our share in some just-came-out-of-the-oven sconces made by the best husband in the world.  I made Carrie and I some CLICK protein drinks and she had to take off for a family fun day by the pool.


I on the other hand, could barely move.  My stomach was not cooperating or accepting any food I gave it, so I opted for an ice bath in Izzy's pool (which used to be a sandbox) and then had a relaxing day with my little girl.

I had some (well, okay, a lot) of serious doubts about me running this marathon in October if I struggled so much with this one.  But those were passing doubts.  I'm back on the positive bus and I'm ready for more tough runs.  So much that I'm revamping my plan.  It's never too late to change things up, right?
18 miles Carrie CLICK Marathon Training