- January 31, 2013
I've been avoiding this post for quite some time, because once I put it out there, I'm kind of stuck with it.  I've been obsessing about it for months now and I am ready to say I am committed.  Yes, I am committing to a marathon training plan. 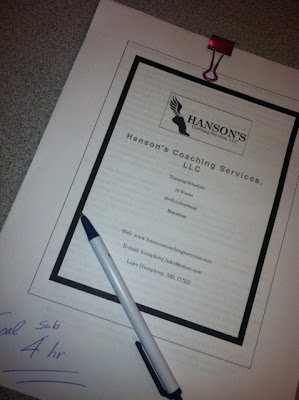 Yes, I have decided to go with the Hanson Marathon plan.  Thankfully my friend, Seth, helped me out with this plan.  I've been observing stalking Ward, Wade, and Joe's Boston Training.   They are doing a modified version of the plan and it's pretty intense.  When I say intense - I mean, each week there are 8, 10, or 12 mile midweek speed runs.  I am lucky to find time to get in an 8 mile run midweek - but now I'm signing up for a 12 mile speed workout?  Oh jeez!  I must be crazy.

To be honest, I've already gone off plan.   Ooops!    Monday was the official "kick off" for 16 weeks prior to Sugarloaf.  And the plan I chose is 16 weeks.  However, with that said, I've been registered to run the Midwinter Classic 10 Mile race this Sunday for a few months now.  I want to do well at it, so I knew that running a 45 mile week on race week wasn't going to give me race legs (whatever that is).  I'm not so worried because I've had a pretty strong base, so taking a step back this week shouldn't hurt me at all.

I am a proclaimed Musha lover.  I trained for MDI and ran MDI in my Mushas.  Sadly, I noticed last month that they weren't going to last much longer.  I mean, I did log at least 700 miles in them.  I knew the day was coming. I needed to find a replacement shoe.  So, of course, I obsessed about what my next shoes going to be.  I decided that I was going to hold off and get the Musha5, which came out at the beginning of January. 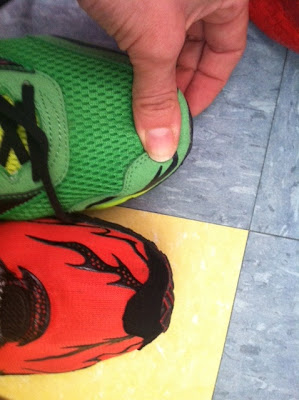 Unfortunately, they came and they went.  There are the Musha5s (green shoe).  They were huge!  I wear a size 8 men's in the Musha4, Universe, and Wave Rider, so why wouldn't I wear an 8 in the Musha5?  Oh well.  So I returned them and then found a great deal of Musha4's at RunningWarehouse.  I really wanted the new Musha, but to get a pair of Mushas that I knew would fit me for $55, heck yes! 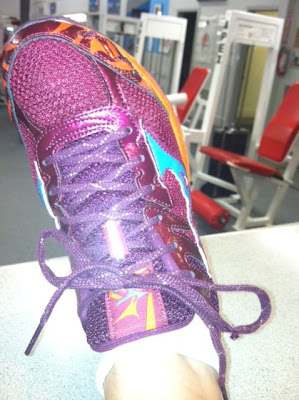 And they came already!  Yay!  Can you believe these are men's shoes?  They really look a little more magenta and purple than anything. 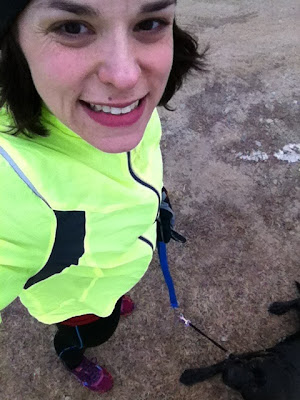 Of course, I had to get in a run the day they came.  They felt like an old friend, just with a lot more life to them.  I am one happy girl in my Mushas.  Pepper was also happy too because I brought her with me.   She hasn't been getting in a lot a miles lately, because I've been running on the treadmill.  Which means poor Pepper is putting on some weight.  Soon the weather will be much better and she'll get out there with me and run more often.

Moving on to the race coming up this weekend.  On Sunday, the girls and I (and Ward) are running the Cape Elizabeth Midwinter Classic.   The first year Stacy and I registered for it, it was snowed out.  Then last year, the girls and I registered for it.  This was the race when I made a huge mistake.  I woke up that morning, had a fever of 103, but convinced myself that I felt fine and that I was just going to run it anyway.  If you want to read about my BIG MISTAKE, feel free to read about it HERE.


Anyway, in prepping for the race, we decided to scale back our long run last Sunday.   I was scheduled to work at the gym, so Stacy and Carrie joined me for 8 easy miles.  Jill and her family (and my son) went away for the weekend, so Jill ran her treadmill miles by herself in NH.  No worries though, we sent her pictures of us, so she would know how much we missed her. 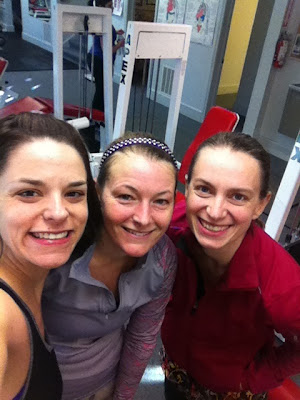 And just in case you want a full body shot of us - my co-worker, Ron, was nice enough to take this picture of us. 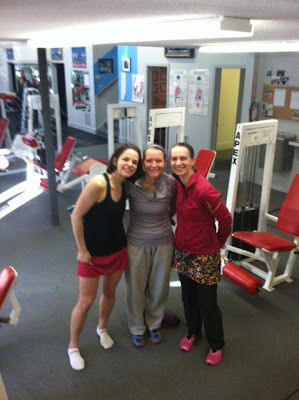 My goal for Sunday's race is to do better than last year - which was 1:24.  Not too shabby for running it in a half-delusional/feverish.  Let's just hope that I can do better this year and not get sick.  Which, might be harder than it seems because I've been fighting a head cold all week and I think everyone in my house is sick.  No worries, I walk around with Lysol and sanitize everything and I've been popping Vitamin C like a mad woman.

Do you have any racing plans coming up?  What about training plans?  What are you using?