The Week In Workouts

- September 07, 2013
As I type this we are on our way to Allentown, PA for Ward and Wade's marathon.  Tomorrow morning they will be running the Lehigh Valley Marathon.  Izzy and I have come along to provide support.  I'm excited for this marathon even as a spectator because this course was created by the one and only Bart Yasso.  Maybe I'll even get to meet him!
On my own workout front, this week has been a great one. I'm feeling strong and recharged.
Monday I was supposed to run with Carrie. But the torrential downpours and thunderstorm had other plans.  She had 18 miles on the agenda and I was thinking I wanted to do 10 for Mommy Run Fast's #fall5and10.  After we cancelled I decided I would head to the gym to get in some treadmill miles instead.   After 1 mile on the treadmill I realized the downpours had stopped so I turned off the treadmill and headed outside as quickly as possible.
It was a slow and easy run but it wax perfect. Lonely though.  There was a slight mist for most of my run.  I had to stop a few times to move  large beaches off the trail and even a tree at one point! 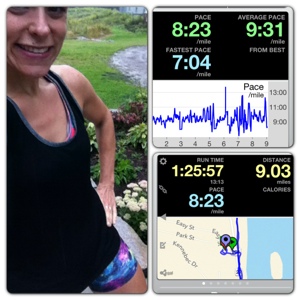 Tuesday was back to school again and my calf was a bit on the tight side.  I really wanted to do some kind of cardio for the day.  I chose to head down to the fitness center just after school left out and got in 4 miles on the elliptical and then even did some rowing.  I remembered seeing rowing on the Spartan Fenway video so I thought "why not?" 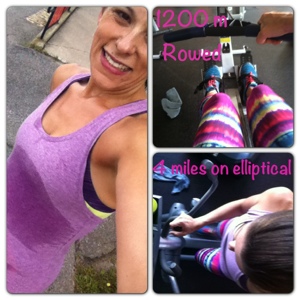 Wednesday I decided it was a run day.  I managed to get in 4.19 miles before the bus showed up with Tucker and Jackson.  As soon as they got off the bus  I had them run my final mile with me.  I also started Blonde Pony Tail's #100challenge.  The challenge is to get in 100 push ups, 100 sit ups, and 100 squats throughout the day.   Of course I had to start as soon as I saw the Fitfluential tweet and I needed proof.  So I suckered the new teacher next door to come over and take pictures of me! I've done 3 days so far and it's really a great challenge.  Not hard to get in those reps throughout the day.  And I'm feeling stronger.  Thank you Jess!! 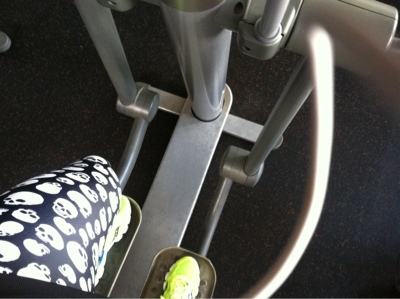 Thursday I felt great but didn't want to push it with the foot so I went down to the fitness center for another round of elliptical and rowing.  I'm really liking breaking up my running with time on the elliptical. 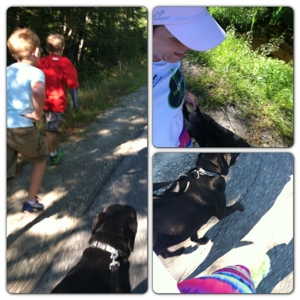 Friday was an absolute gorgeous day.  Just enough of a breeze, sunny, zero humidity.  Perfection!   I managed to get in a nice 4 mile run and the added on another with the boys when they got off the bus again.  I also brought Pepper along for his first run since she tore her toenail.
Now that I have a fantastic assortment of Spandits capris and shorts I definitively looked and felt fantastic.  Not only are my Spandits awesome to look at they feel great while running and working out.  There is no chafing at all either.  Always a necessity for me.  I do have plans on adding more Spandits to my collection.  It appears as though winter is coming (hopefully not too soon!) but I will need some kick butt tights to get me through the winter.   Now, which prints should I get?
#100challenge Bart Yasso blonde ponytail Lehigh valley marathon Spandits