- November 29, 2013
The following post is sponsored by 180 Communications on behalf of FLEXR Sports.   I am receiving no further compensation for this post.  As always, all opinions expressed on my blog are 100% my own.

I am a runner who really likes to be well hydrated on my runs.   I've tried a variety of different methods in staying hydrated on my runs.  In the beginning, I used to stash water bottles along my route.  But that really just took too much time.  Having to go out just before and drive along the route, hiding a bottle and then hoping it was going to be there when I got to the hiding spot.  It really just drove me crazy and caused a bit too much anxiety on my part.  Then there was a period of time I would run with money, so I could just stop at a store and buy a bottled water.  That plan was okay until the only store along my route was closed on one of those long runs…and the girls and I had to go into a bar and beg for water.

Then I started running with a hydration backpack.  I liked it a lot, but didn't like the rubbing I would sometimes get from the straps…depending on what I wore.  So then I tried out the hydration belt.  I didn't even get 1 mile into my run with a hydration belt before that thing was off and stashed in the bottom of the jogger.  Ugh!

Then I started trying out handhelds.  I liked them a lot because of the convenience of having my water already in my hand, but I hated the sloshing.  I tried telling myself it didn't bother me, but it really did bother me at times. 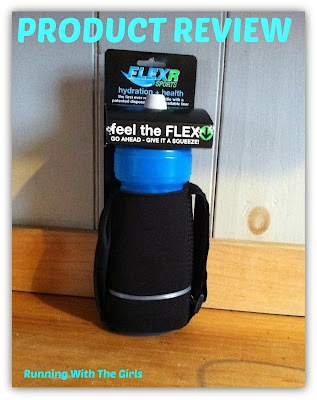 First of all, the bottle is incredibly flexible.  And it's more of an oval shape.  It came with a black, neoprene cover with a adjustable velcro strap, and small pocket to hold small items - like gum, keys, a little bit of fuel.  The strap is very comfortable around my hand and very easy to adjust.

The cap is a little different.  It's a twist cap and not one that you need to pry open with your teeth when you run.  It was rather easy to open and didn't get me soaked when I tried to get a drink. 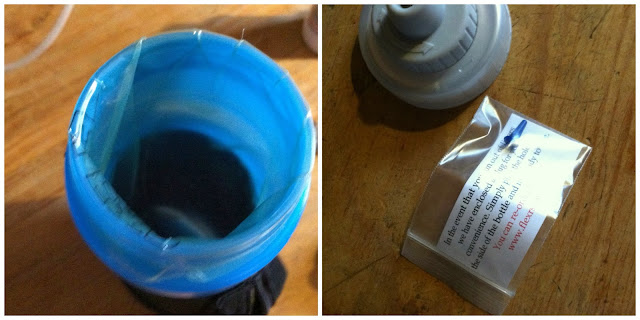 Another part that makes this bottle unique is that it comes with biodegradable liners.  I thought that was weird at first and maybe not the most economical.  But honestly, I haven't tossed my first liner yet.  I try to be frugal with my gear, so I've been washing it out and air drying the liner.  What's great about the liner is that it is the reason why there is very minimal sloshing of water.  As you drink from the bottle, the liner collapses.  It's a pretty cool concept and it works!   I have to mention, the liners are rather inexpensive, so when I do run out, I can get another 25 for $2.95.  That's not bad at all!  Or, if I do run out, I was given this little plug that will keep the water from leaking (because there is a small hole on the side of the water bottle, with does allow for you to squeeze out the air).  Pretty awesome! 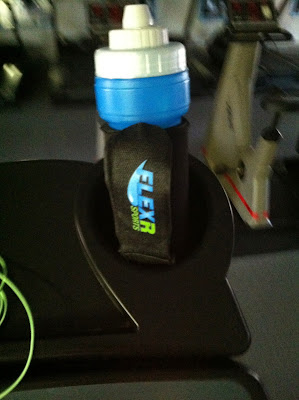 I've taken my FLEXR water bottle out for a few mid distance (6-ish mile runs) as I'm not training for a marathon right now and I came back well hydrated and pretty pleased with the bottle.   I've even brought my FLEXR with me for treadmill runs and elliptical workouts.  I love to be able to drink and not spill water all over me on equipment and this works! 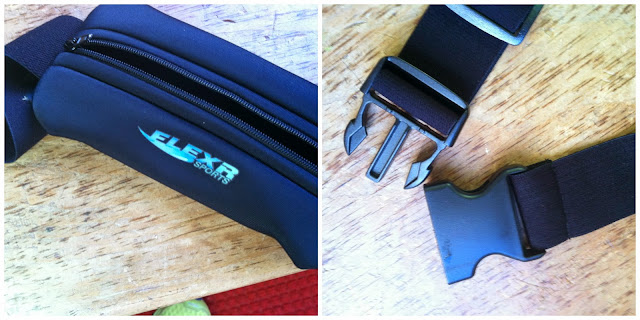 I also received a FLEXR Sports Neo Running Pouch.  At first, I really didn't want to try it out.  I've tried a few pouches before and usually only ran in them once before they were given away or just tossed aside never to be used again.  I could never get used to the idea of something around my waist/hips/wherever while I ran.  The pouches always moved around and drove my CRAZY.  But, not this one.  I even loaded it up by putting my phone in there.  And ran  a 5 miler, then a 6 miler with it and it didn't move once.  I didn't want to take it off and toss it in the stream or the field.  Have I found a pouch for me, finally?  I think so! 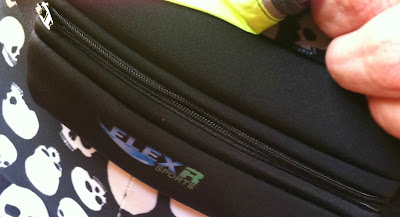 The pouch also comes with bib # holders.  Which I have to admit is pretty cool.  I don't enjoy pinning bib #s onto my shirt.

Tell me, would you try this bottle or pouch?  Both items are very different than other products I've tried before.