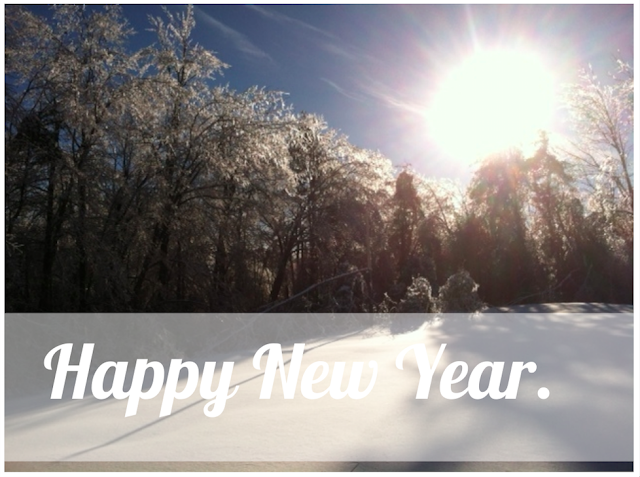 My goals for the year:
- make strength training part of my regular routine
- practicing yoga
- eat cleaner (more coming on this!)
- run and have fun
- be active every single day
- try new things! ... like my 1st tri

I thought about setting a mileage goal...like run the year - 2014 miles for 2014.  But I'm not really sure I can/want to commit to that.  It is such a huge goal.  I'm impressed with the runners out there who are taking that on!

Not too bad considering I was injured for a pretty large part of it. 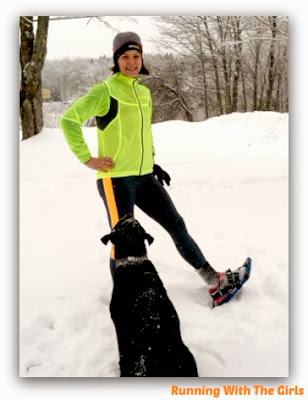 Since we've had the pleasure of getting a ton of snow - with more on the way, I thought I should embrace what we have rather than fight it or be pissy about it.  Healthier - right?  I don't always have the chance to get to the gym and we have this great 6 acre lot that I should use.  On a whim two days ago, I decided I would try out snowshoe running.  The first 1/4 mile was TOUGH.  I had to make a trail.  Some spots had only a few inches and others had over 20 inches - thanks to snow drifts in the field.  Plus, Pepper joined me and she was overly excited.  Either she was in front of me - and would stop or she was behind me stepping on my snowshoes! 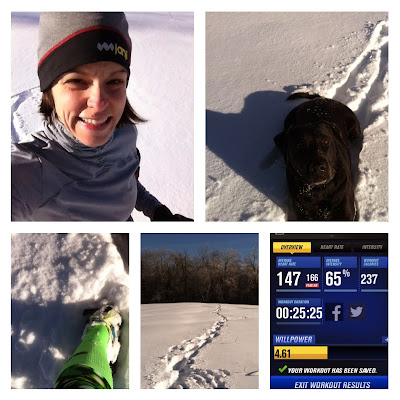 But after my trail was completed - it was so much better!  I stayed away from going into the woods because the ice and snow falling from the trees made me a bit nervous...which resulted in a little shorter loop - but 1 loop = 0.33 miles.  So, 3 loops plus a little bit = 1 mile.

I am trying out the new Under Armour Armour 39 Heart Rate monitor as part of a FitFluential Campaign.   The only bummer about the Armour 39 is that it's not compatible with my iPhone 4.  It's only compatible for 4s and above.  BUT, it IS compatible with the iPad mini and Ward just bought one - so now I'm taking over his iPad for workouts.  Thanks Ward! 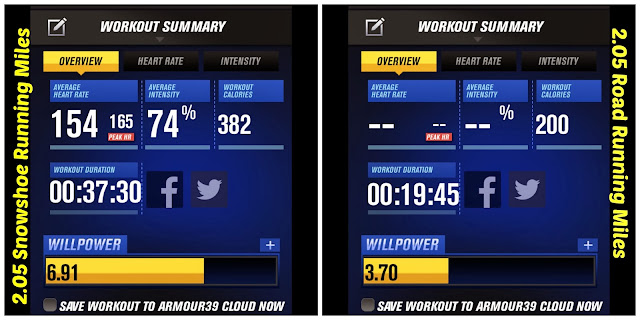 Yesterday I decided I would try for 2 miles.  And I did it!  It definitely was tough and my average intensity of 74% and WillPower of 6.91 shows it.

Then I thought I'd try out the same distance on the road.  I'm not sure why the intensity didn't show up on this screen shot, but it was 44% and the WillPower of 3.7.

Maybe I DO see more snowshoe running in my future!  It's super accessible for me and the kids can either play outside while I'm doing it or hang out inside.  Granted it takes a bit more time for me to complete 1 mile (16ish minutes), but I'm getting one heck of a workout!!!

I'm going to head out for some miles today.  I still haven't decided how many yet or how I'm going to do them yet.  But I know I am going to run.  Wow, I'm liking this new, relaxed, joyful approach to running.  Far less stressful and enjoyable!

How are you starting off the new year?  What are your goals/resolutions for the year?