- June 27, 2014
I've been enjoying a few tasty things lately and needed to share with you.  Maybe you'll like something you see here and try it for yourself!

Perky Jerky
This tasty jerky is addicting.  Thankfully I received small samples, or I wouldn't be able to stop eating it!  I received the Original in beef and Sweet and Spicy in turkey to sample.  I loved both. 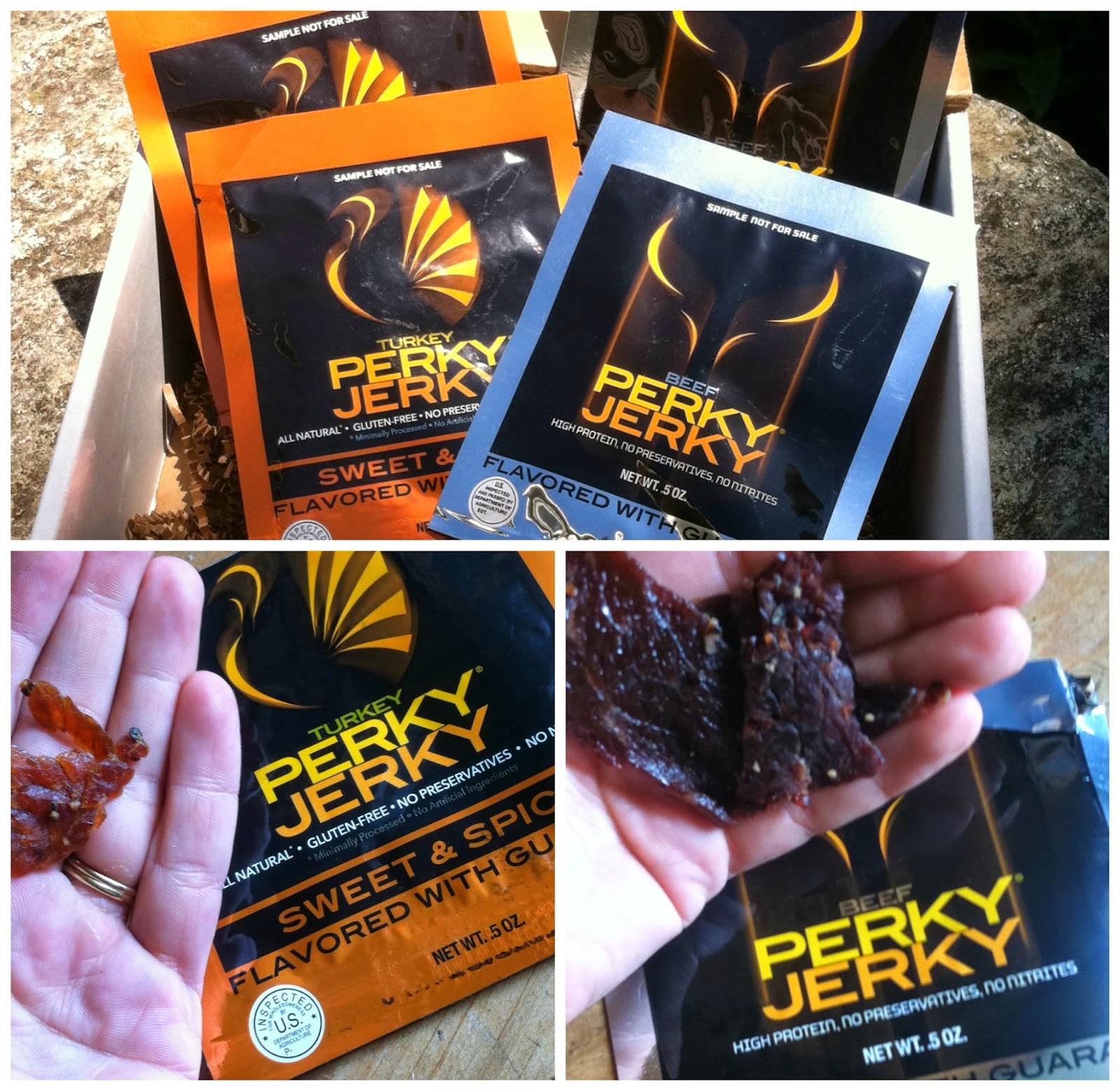 Made from only natural ingredients, this jerky in turkey and beef, is quite tasty.  No nitrates.  No preservatives.  No added MSG.  And a great protein source!  Perky Jerky makes a great snack without adding a ton of calories and other bad things.


Salads
Summer and salads just go hand in hand.  I've been loving my daily salads for lunch.  They are so much more appetizing when I get to sit out on my deck. 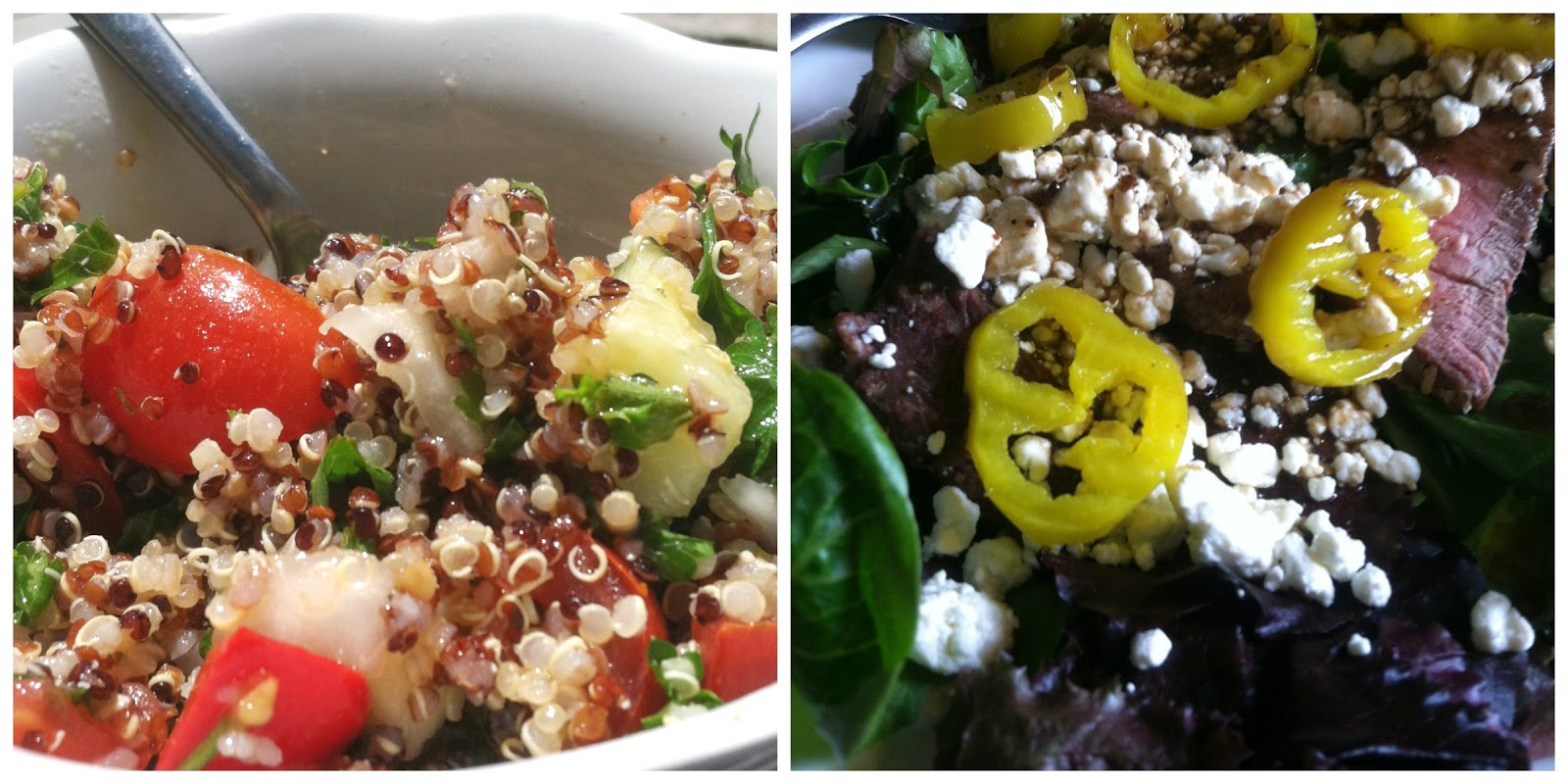 Goat Cheese and Steak Salad
We had steak on the grill over the weekend and had some left over.  I love adding steak to my salad for an added punch of taste and protein.  I also had a jar of hot banana peppers. Combing these two items over my greens with some goat cheese and balsamic dressing really hit the spot.  I hope you like it!

PocketFuel Naturals
A new favorite training fuel is PocketFuel.  I love peanut butter and this stuff has the consistency of it.  But tastes even better.  I love that it's ma real foods.  It doesn't upset my stomach at all either. 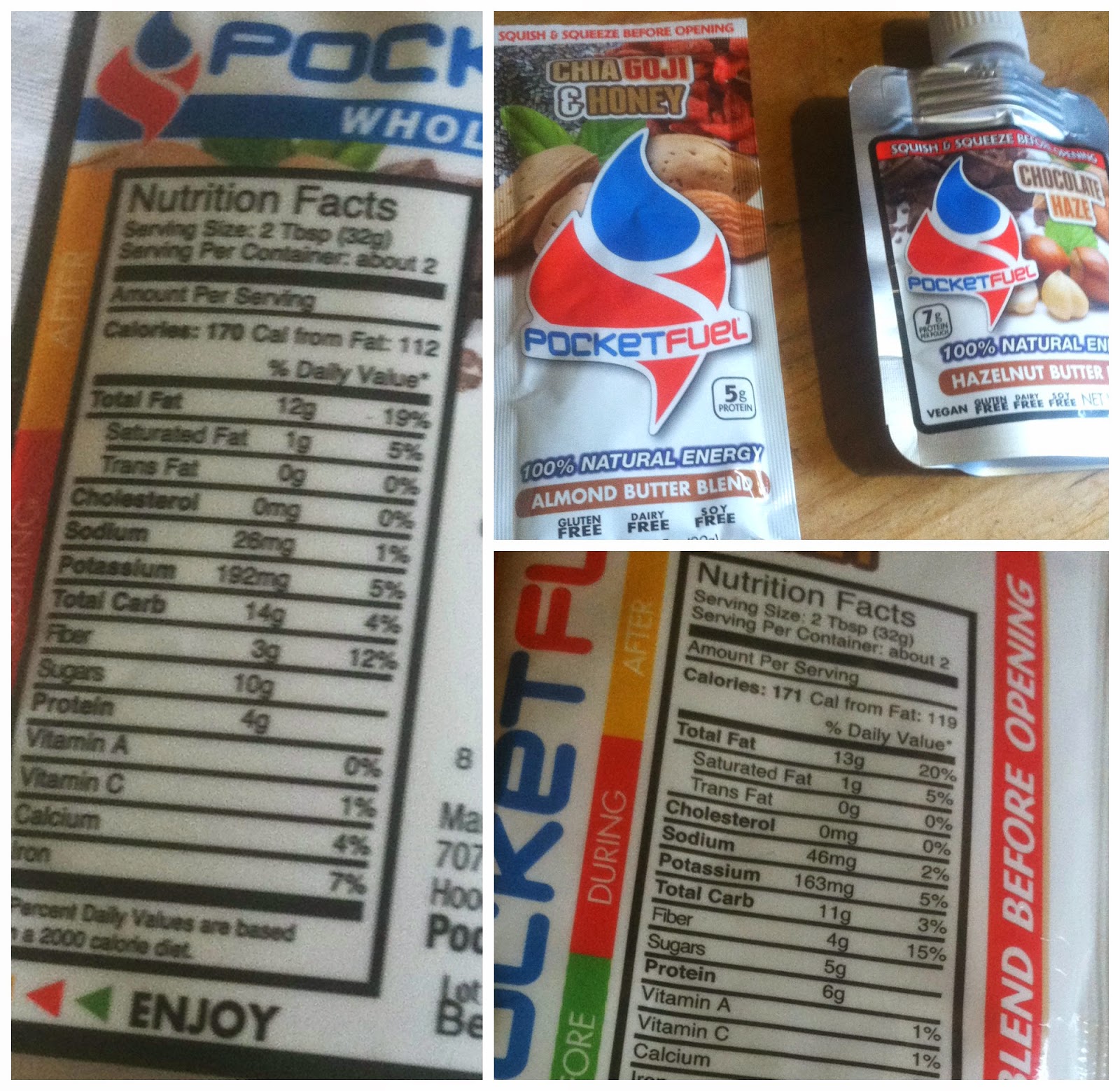 Actually, I was given a couple of these to review, thanks to Amy at the Rail Trail Run Shop!  I used the 1.8 oz Chocolate Haze, which tastes like nutella, but better.  What I loved about this packet was the screw top - which allowed me to take in some fuel and put the cap back on so I didn't have a squishy mess in my pocket.  The 1.8 oz packet has 2 servings in it, with 170 calories per serving.  Stacy and I shared a packet on one of our training runs and it was plenty of fuel to get us through 15 miles.

I had the Chia Goji and Honey packet sitting on the counter.  When I came home from work the next day, the it was gone was gone.  I checked my fuel stash in the panty and it wasn't there either.  So I asked Ward if he saw it.  He said "I ate it".  I asked if he ate it while he was running and he said "no, it looked good, so I just ate it.  It was tasty."  Ugh.  Men.  Nothing is safe in this house!  But the good news is that it's tasty enough to just eat...even if you aren't going to a run.  Now, I cannot say I'd grab some of my other fuel choices as a snack.  But Pocket Fuel.  Yes.  I would.

I was just checking out their site again for the flavors they offer:  Banana Blueberry, Coconut Cherry, Chia Goji and Honey, Chocolate Haze, Pineapple Coconut and Vanilla Haze.  Every single one of these flavors sound delicious.  Now to get them at the Rail Trail Run Shop!  What I really like about PocketFuel Naturals is that they have a few sizes to choose from - single serving packets, 1.8 oz with a twist cap, or a 20z refueler pack so you can refill your flask with what how much you want when you want it.  Talk about reducing waste!


Frosty's
Frosty's makes the best donuts ever.  I actually steer clear of donuts 99% of the time.  But have a hard time saying no to Frosty's Donuts.  Last weekend, Frosty's had a grand opening in downtown Gardiner.  I'm excited by this but know I will need to limit my trips there.  I took the kids to the grand opening so we could experience the first day excitement. 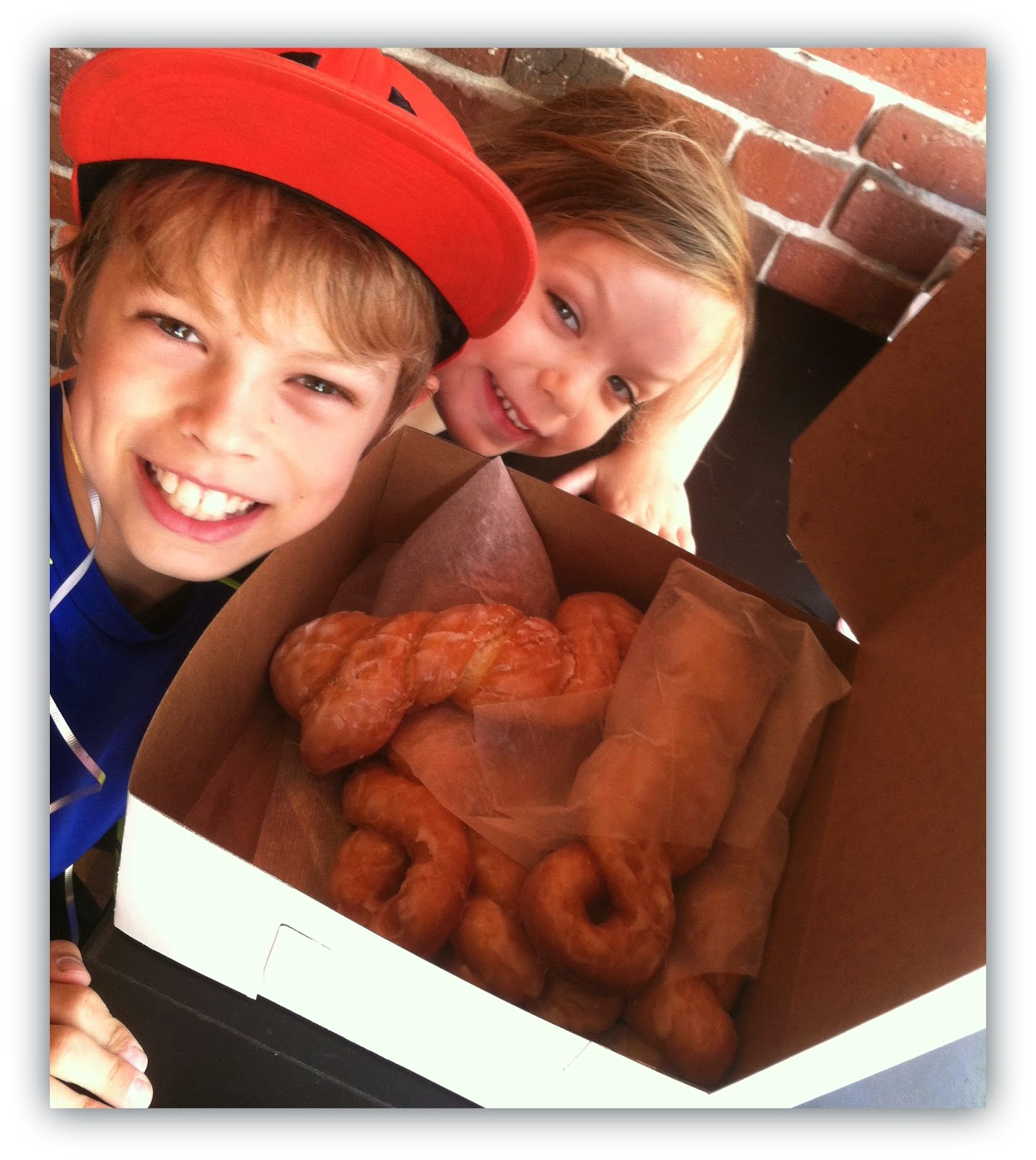 And then took tons of pics and sent them to Ward, since he loves Frosty's and couldn't be there.  We are cruel.

Chocolate Tea
Oh yes.  It's a thing.  And it's delicious.  A few weeks back I reviewed Numi's Spinach Chive tea which was part of a Bestowed Box review.  Sadly it wasn't my favorite.  However, I was sent a generous sampling of Numi Organic Teas and I've loved all of them!

Numi is named after the Middle Eastern dried lime teasan that the founders drank as children in Iraq. Numi has a very distinct, tart citrus flavor and is an oasis of health.

The PU-ERH Collection has 6 unique flavors: Chocolate, Emperor's, Jasmine, Basil Mint, Cardamon, and Ginger. Some of them are labeled with higher caffeine.   I flew through these with no problem.  Each flavor had a new twist and was just as yummy as the one I had before.  I've even made an iced tea with these - the Emperor's Pu-erh and it was very different than any other iced tea I've had before.

The Indulgent Collection is blended with real cacao and has many delicious chocolate flavors: Chocolate Earl Grey, Chocolate Mint, Chocolate Rooibos, and Chocolate Spice.  Each and every single one of these had a great chocolatety, sweet taste that felt like you were sipping an exquisite treat.  Quite delicious. 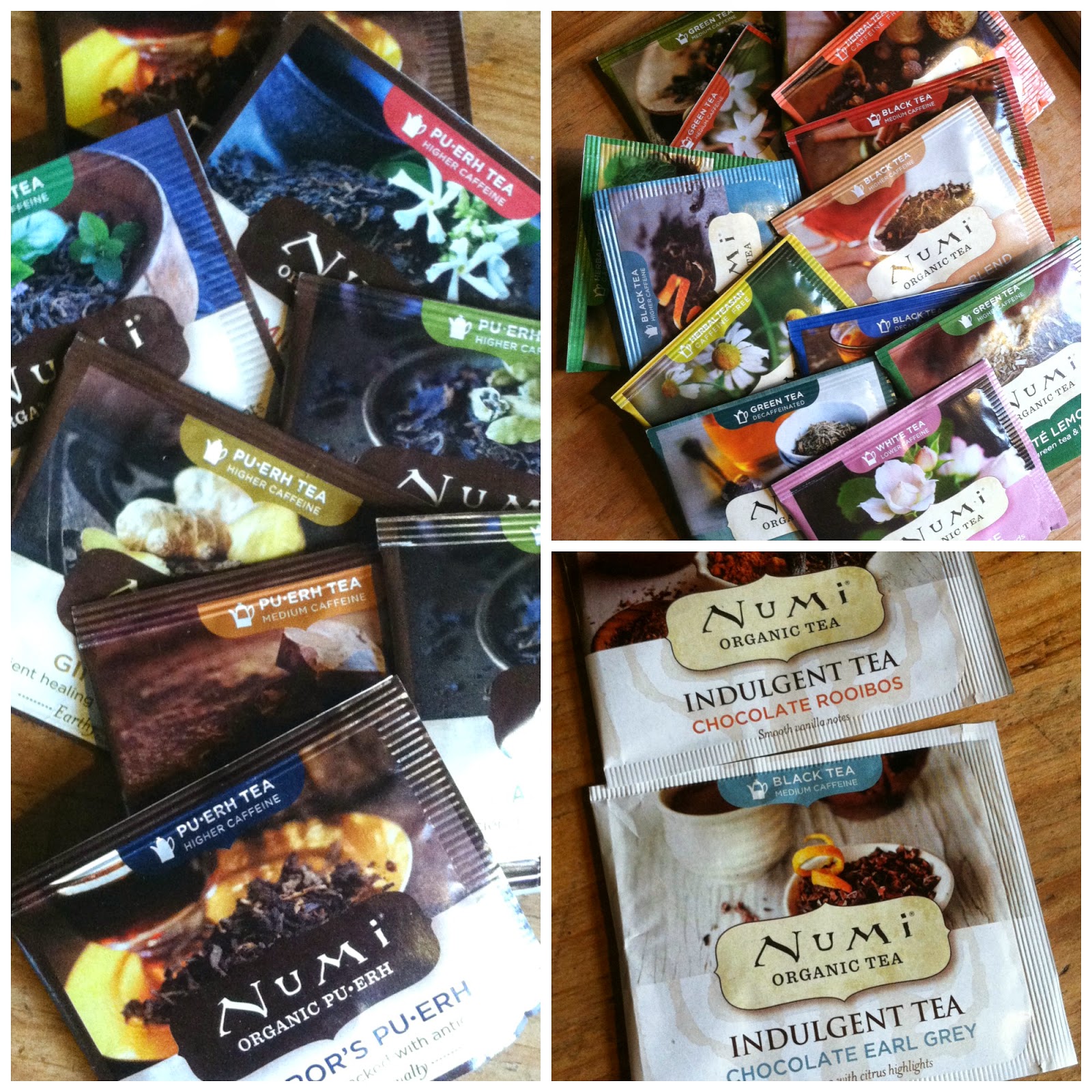 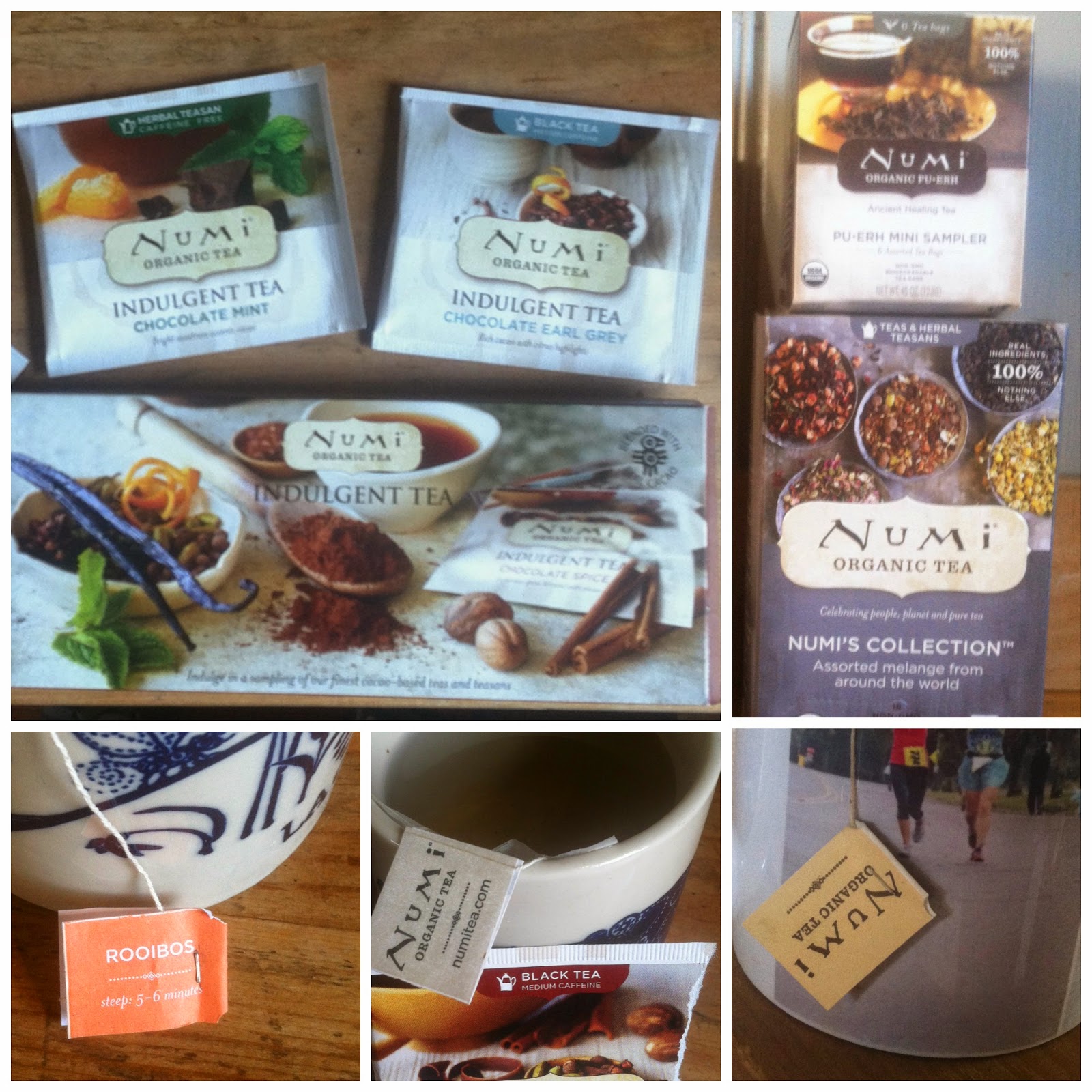 As you can tell, I was sent so many samples and I wasn't disappointed in a single one.  All of them a very high quality and superior taste.  A brand I have already gone ahead and purchased more of.

What have you been enjoying eating or drinking lately?  Share!