- July 29, 2014
We lost my mother to lung cancer nearly 8 years ago.  My mom was my person.  The one I could be 100% real with.  The one I came home to in college when I had pneumonia.  The one I called first when we found out we were pregnant with Tucker.  Losing her was like losing a huge part of me.

When I first heard of Tri for a Cure, I initially thought it was a fundraiser for breast cancer because just about everything is in pink.  But that is not the case.  Not that breast cancer isn't high up on my list of cancers to ban, it has and still is affecting some people very special to me.  What I'm saying is that I really wanted to find a race that fundraisers for all cancers - and I found it with Tri for a Cure. 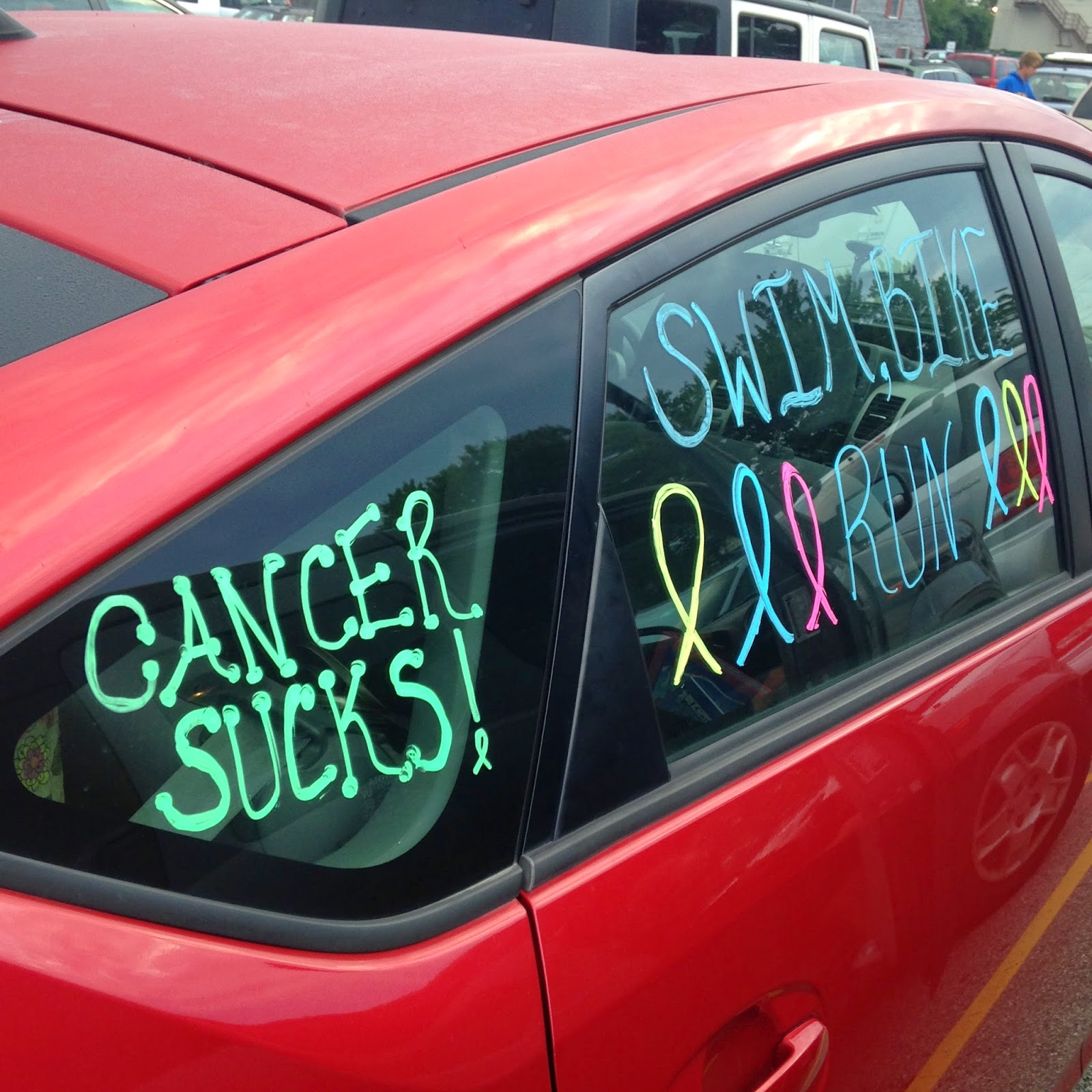 I have been wanting to do a tri.  I've been saying this for the past couple of years.  It always makes it on my bucket list and always gets crossed off. 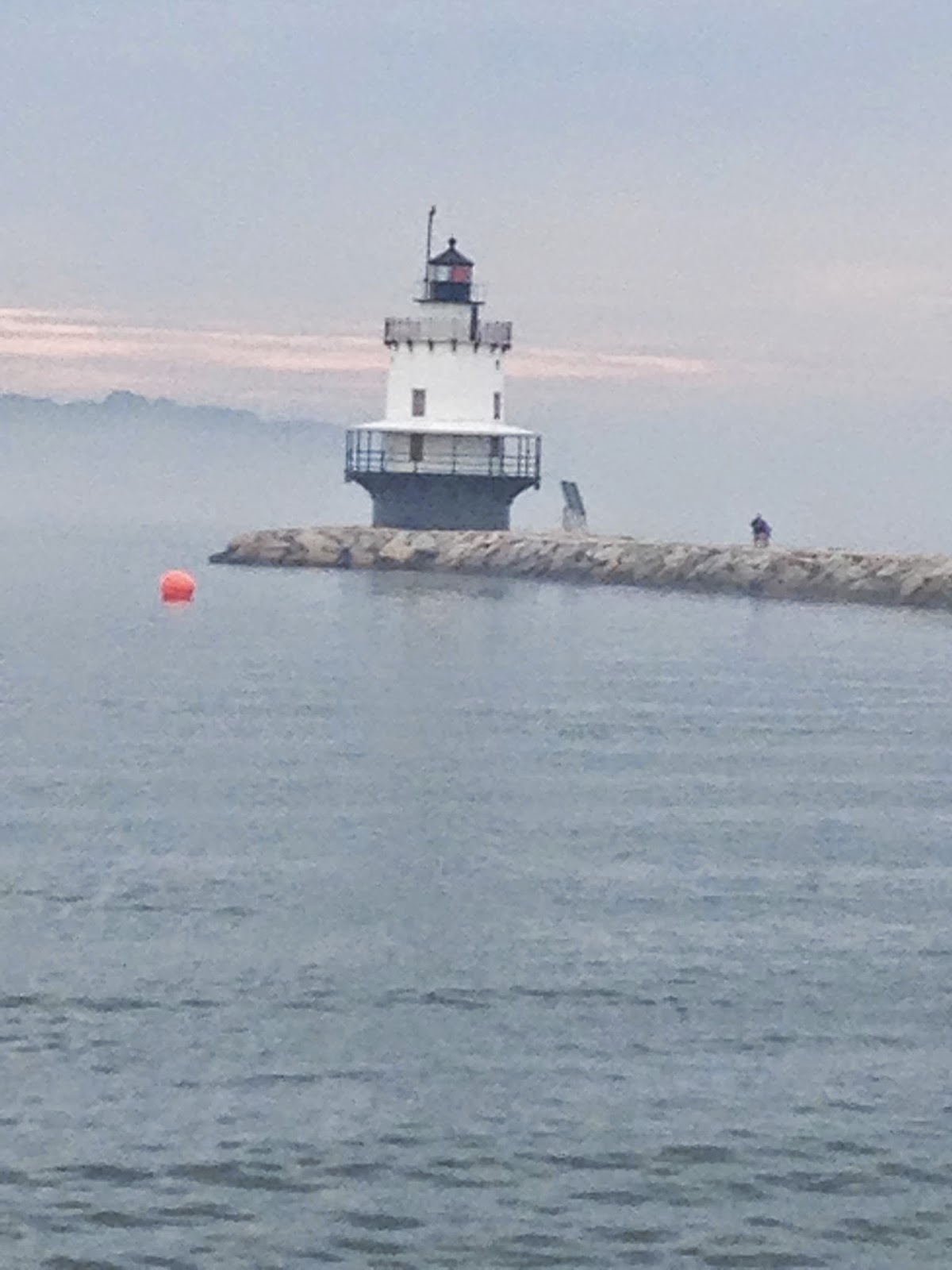 The only problem --- I don't swim.  However, experiencing my first Tri for a Cure, put my mind at ease.

Last Sunday, the first wave of swimmers was the wave of survivors.  All shapes, all sizes, all athletic abilities, all ages.  These women.  These survivors are my idols.  They battled far more than I have and they are doing it.   Some have done the tri for years.  Some were taking it on for the first year.  I'm still in awe.

The second wave of swimmers were survivors who were doing the relay portion.  Again.  Complete awe. 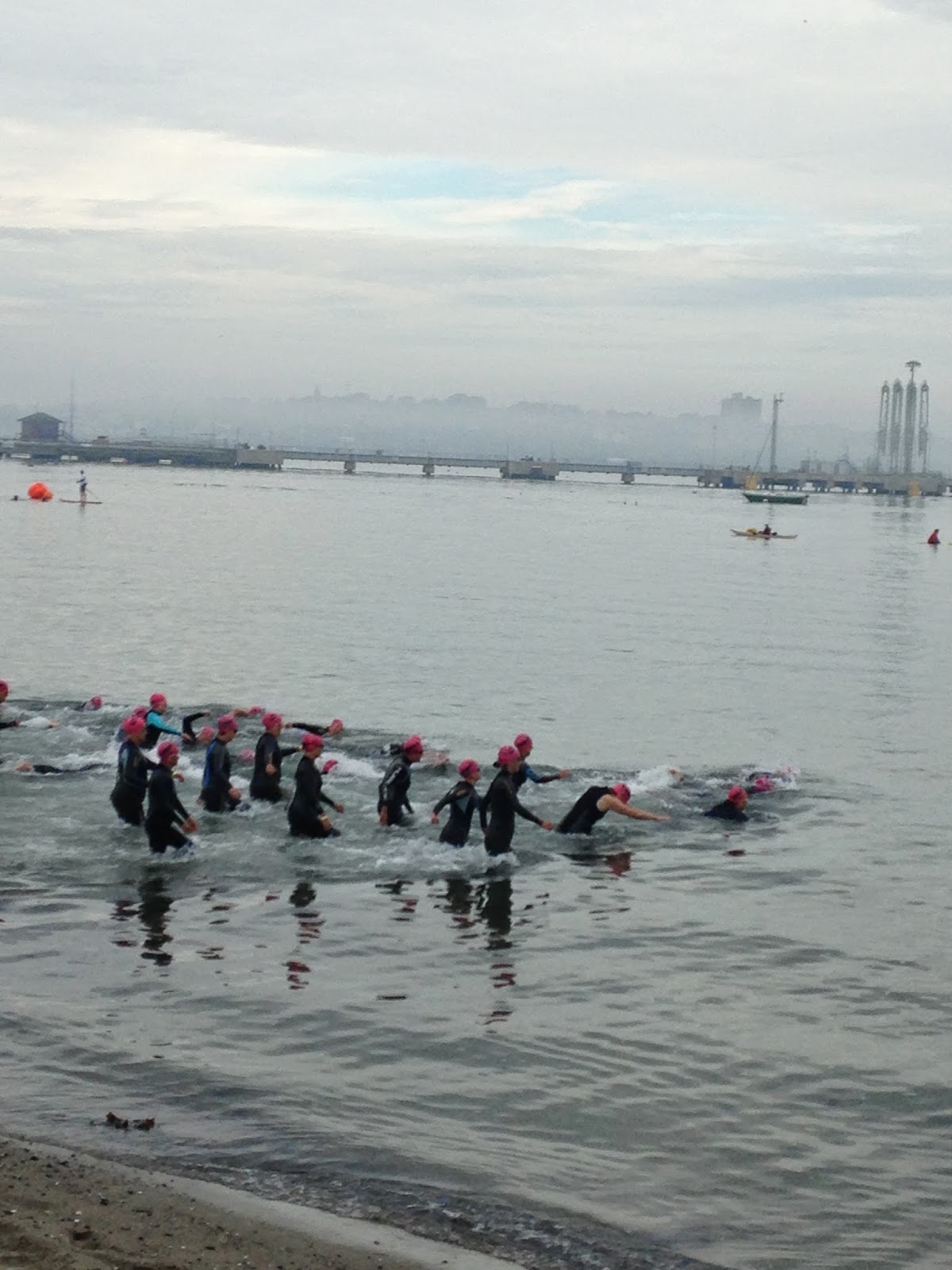 As I've said, I don't swim.   Well, I know how.  But not for long distances.  But that's beside the fact.
This year was my first year participating in Tri for a Cure.  I participated as the runner in a relay with my friend, Stacy (our biker) and her friend Jeanna (our swimmer). 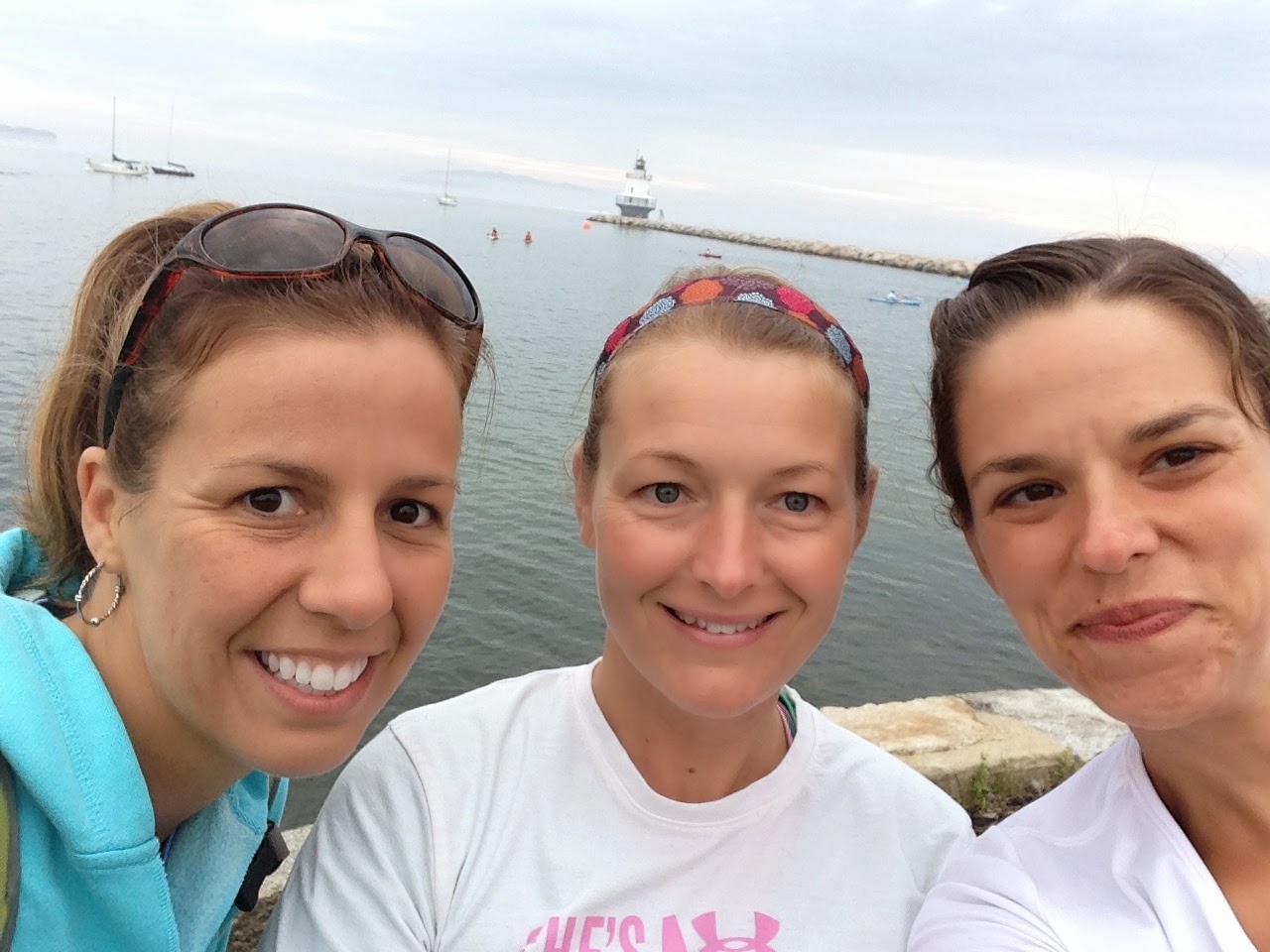 I've never been to a triathlon before and didn't really understand how they worked, so all of the rules were a bit overwhelming to me.  I stopped countless volunteers reiterating the rules and asking for clarification.  They really must think I'm a challenged individual.  There's a lot of a tri!  And I was only doing the running part.  The easy part in my opinion.  But the handing off was portions were a little confusing.  Where to stand, waiting until the bike was fully racked before taking the timing chip off the biker.... you know, details like that.  I really like to understand what needs to be done and do things correctly.  I don't like to do things half-assed.

Jeanna was a champ and took on the water like a pro.  I didn't see her swimming; however, because I was following the rules and waiting at the exchange spot like I was told.  The only problem, I had only met Jeanna that morning and all of those swimmers coming out of the water, with their wetsuits one and swim caps looked the same.  I was so nervous I wasn't going to know who she was and completely miss her!  But, no worries.  I didn't!  When she came out of the water and got to the transition area, I took the timing chip off her ankle and put it on mine - then took off up the hill to get the timing chip to Stacy, who was waiting at the biking transition spot. 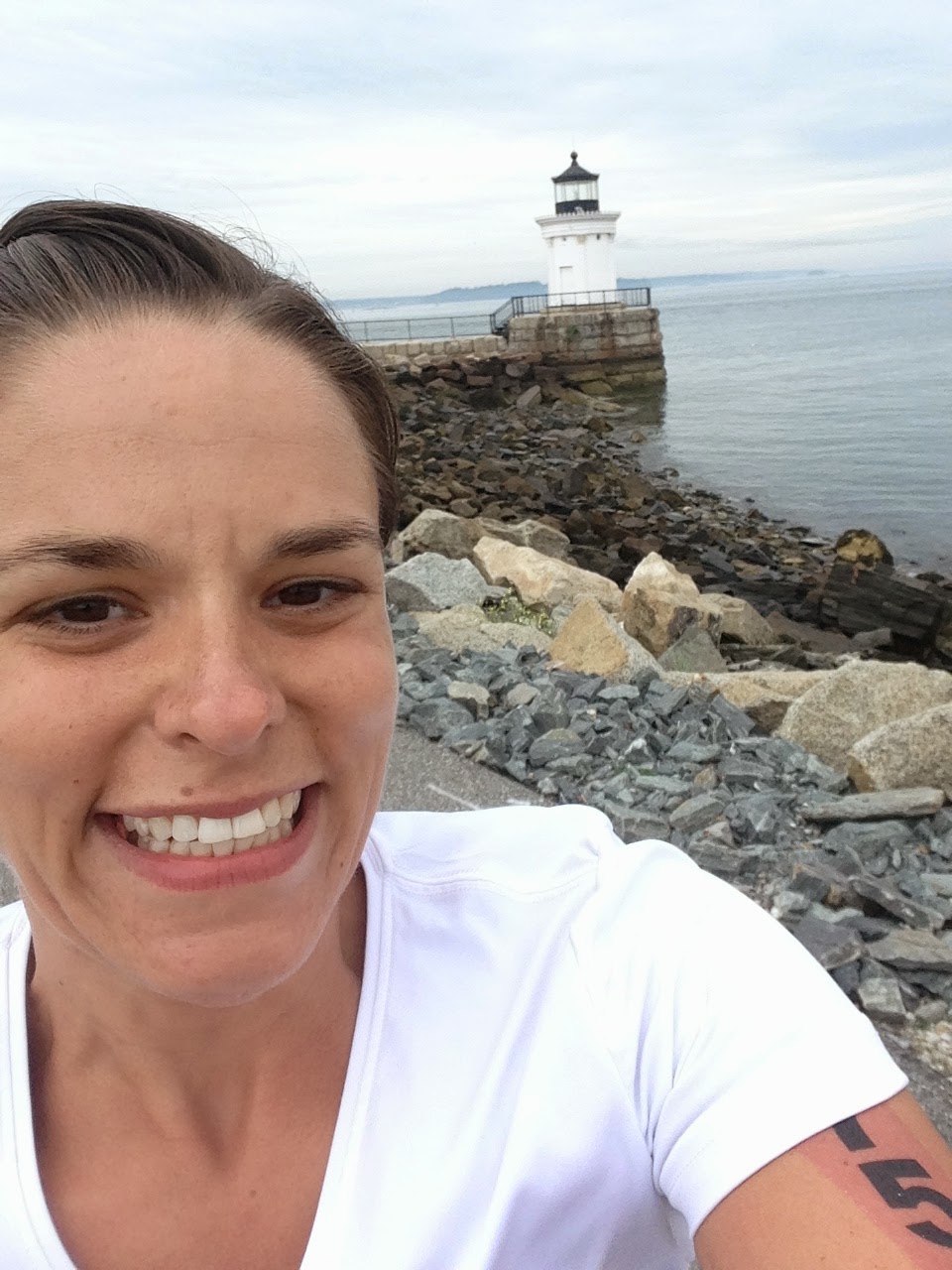 As soon as I got there, Stacy was waving her arms for me (thank goodness because there were a ton of people!!! and she was now wearing a different shirt!   I put the timing chip on her ankle and she was off for her 15 mile biking portion. 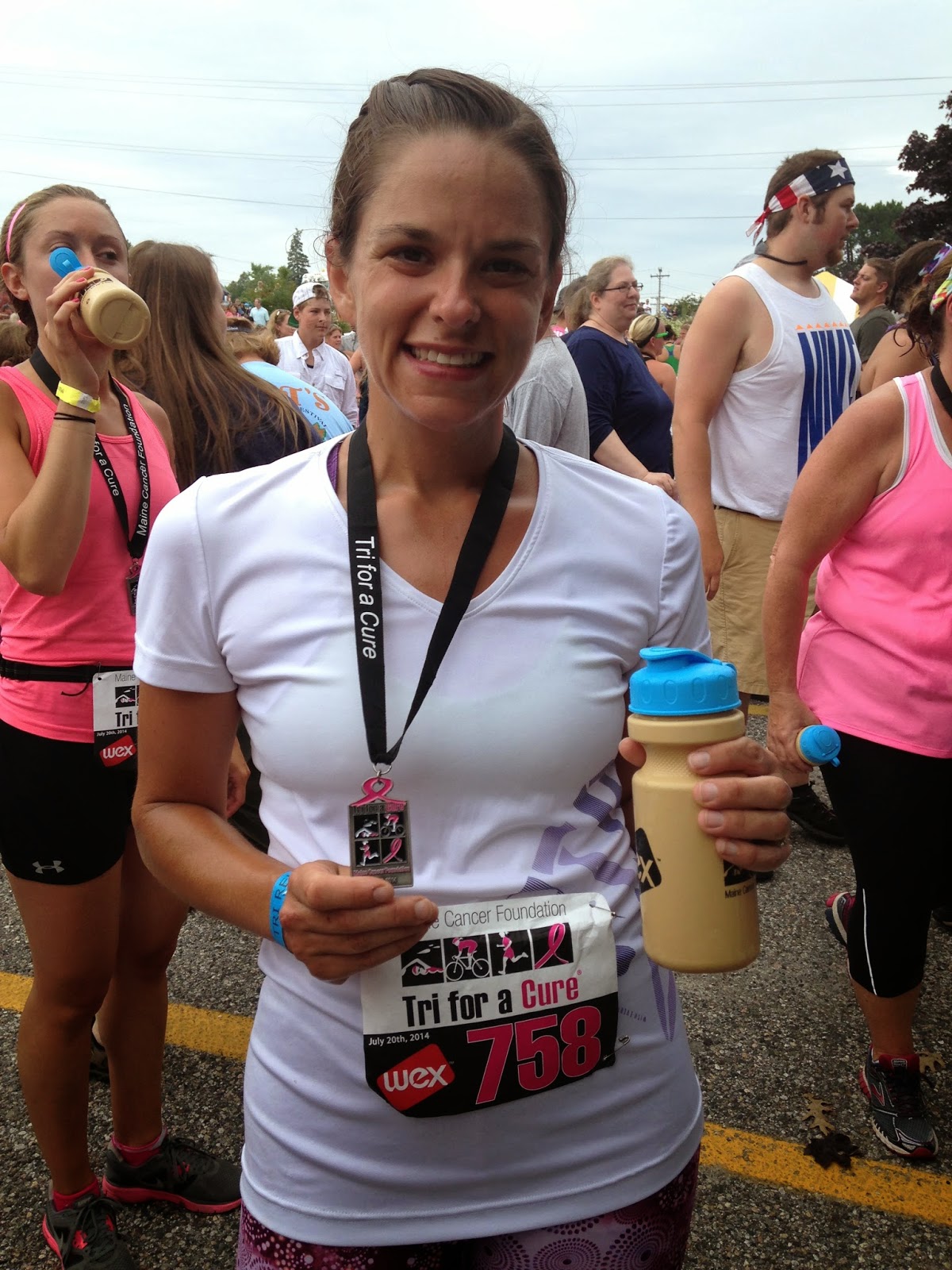 Then, right on schedule, Stacy came in, racked her bike and we put the timing bracelet on my ankle and I was off.  The easy part.  Running.  3 miles. 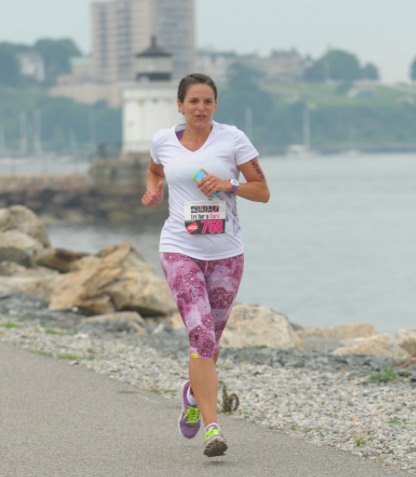 I wish I could say the course was gorgeous.  Only the last mile of it had great views.  But that's okay. The main focus wasn't on the views.  I was running on super dead legs.  No rest time for me with a progressive 16 miler two days before and hosting Tucker's birthday party the day before.  But it's all good.  I told Stacy and Jeanna I should be back in about 24 minutes, not really knowing what my legs were going to do for me. 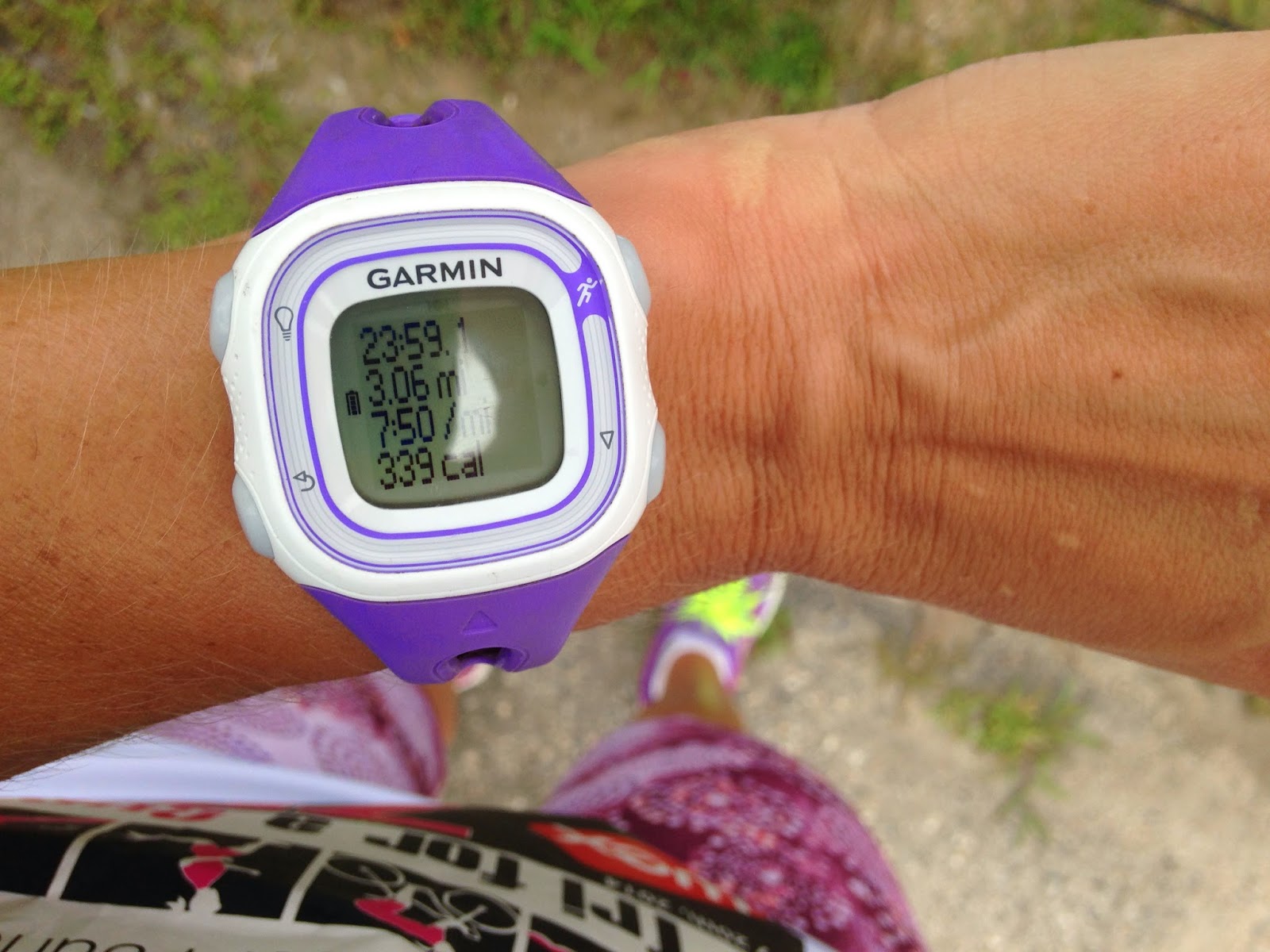 The best part of the entire run was cheering on other ladies who were obviously doing the full tri and other ladies who were out there.  They amaze me.  There were also a lot of tears.  Lots of happy thoughts of my mom, lots of sad ones.   Then I saw one of my students cheering along the sidelines....and a previous co-worker...and then my team.  And we ran in together.  That part was amazing! 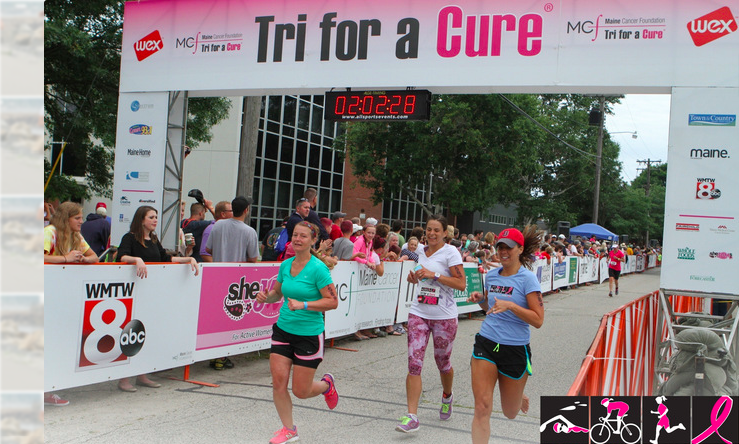 The other two ladies have done tri relays before, but this was my first one and it was rather cool.  If I do do a full tri, this one will be it.   I did this tri for my mom, my friend Vicky, and my friend Janie.  Both Vicky and Janie are fighting cancer now and they are amazing women!  Love you all.