- November 09, 2014
Last Saturday, I let Carrie force me into running the Great Osprey 10k.  Just kidding.  I wanted to do it.  I ran this race a few years ago and remembered it being a pretty challenging but great race.  Fast forward to this year - still a challenging course but still a great race.

It was a rather chilly morning.  Which meant I put on all the layers.  I had a long sleeve shirt with Spandits singlet over it, Spandits capris, with knee high compression socks, gloves, and hat.  Ward told me I was overdressed and I told him he was crazy.  So I put on my winter jacket and snow pants, grabbed my water, banana, iPod, gum, inhaler, phone, and kids and met him in the car.   Yes.  It's cold!  It's Maine!

On the way to the race, I texted Carrie and asked her what she was wearing.....She responded with capris, tank, and arm sleeves.  Oops!  Yep.  Ward was right.  I was overdressed.  Ugh!  Good thing I found the best gift (belated) for Carrie and had it in the car for her.  Custom Maine Mom on the Run arm sleeves.

My new plan - give her the gift and steal the ones she was wearing.  Great plan right?  I thought so.  We arrived at the race start just as Carrie was showing up....and parked next to her.  Making the exchange even more convenient. 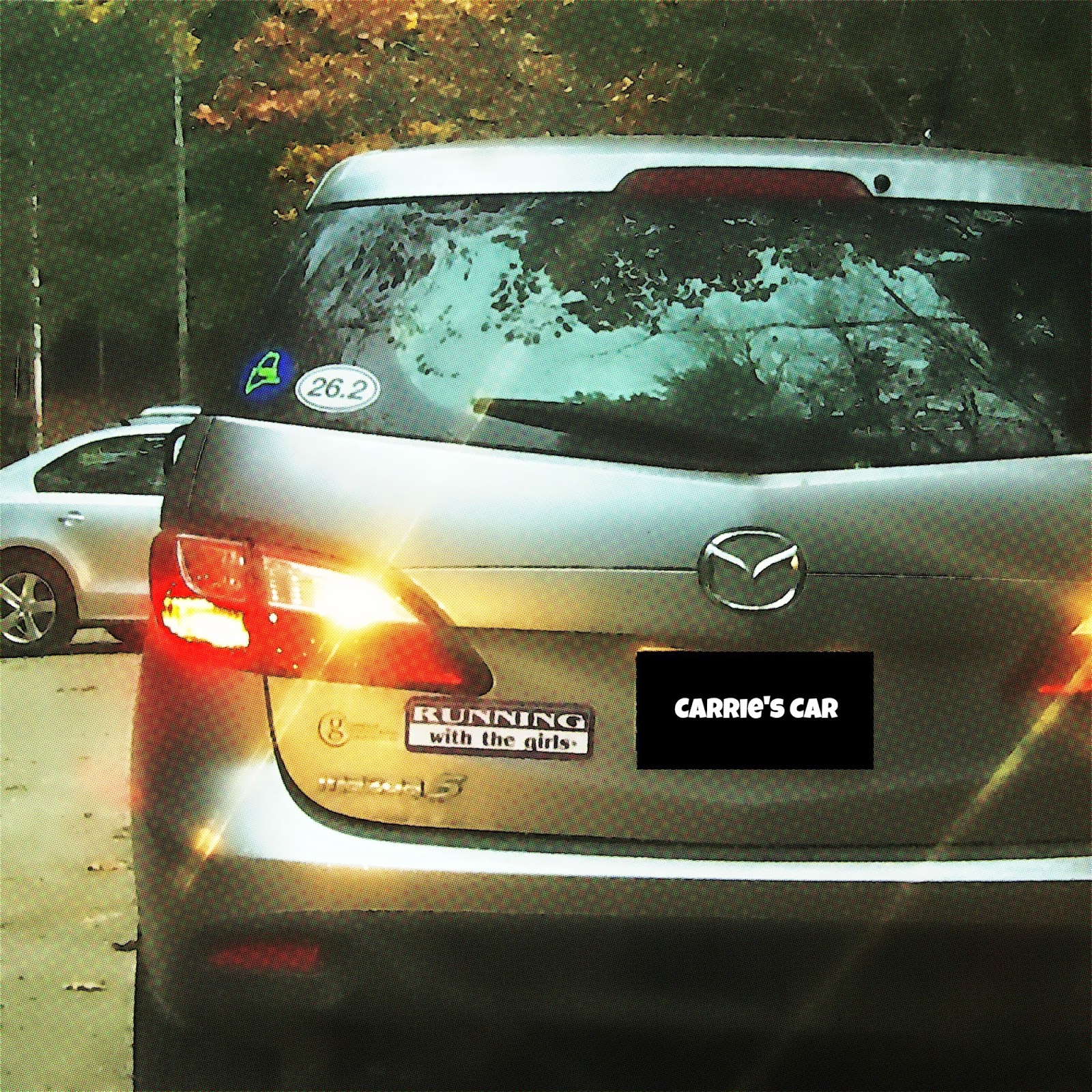 I was going in this race with my only plan of stay with Carrie.  I haven't done a ton of speed work since the injury and I wasn't sure what the race would bring.  The injury tends to flare up when running down hills...and this was a hilly course.  Leaving me rather nervous and unsure what the 6.2 miles would bring me.

Carrie and I did a little warm up and then found our place in the starting area.  After a few race directions, we were off.  The course starts off in a parking lot and is a little congested.  As always, I took off far too fast because I get caught up in passing people trying to find my pace and place.  Carrie and I stuck together through this, which made me super happy.  We might have taken off a little fast, but there were no worries.  There were hills coming...so the pace was going to slow a bit.  And it did.

About a mile in, we saw David Colby of Maine Running Photos.  Yay for David being there!!!

Then the hills started coming.  Carrie is a beast with hills.  She takes them on like a crazy woman.  I do not.  But I always caught up (or she let me catch up).  Around 3 miles, we passed a 12 year old kid.  The entire time were behind him, I wanted to stop him and say "you are totally pronating, maybe those shoes aren't for you."  I didn't think he'd really care to hear this...and perhaps his parents didn't want to either.  So I kept these thoughts to myself.

Soon we rounded to the dirt road and I was thinking...oh yay!  No more hills.  Then Carrie said "nope....there are more!!!"  Oh crap.  That's right.  I was wearing my Skechers Go Run 3, which I love love love.  But one rocks they are not my friend. I did my best to get to the least rocky part of the road.  As we came over a little wooden bridge, we saw David again...which meant 1 more mile!!! And 1 more hill.

Carrie cranked it into gear and I did my best to keep up.   As we neared the last turn, I saw Ward and Izzy standing on the side of the road.  Carrie had already broken away from me.... and Ward was doing his normal...cheering me on like a crazy man!  Then Tucker, thought it would be funny to jump out from behind a vehicle and scare me.  I nearly crapped my pants.  Thanks kid. 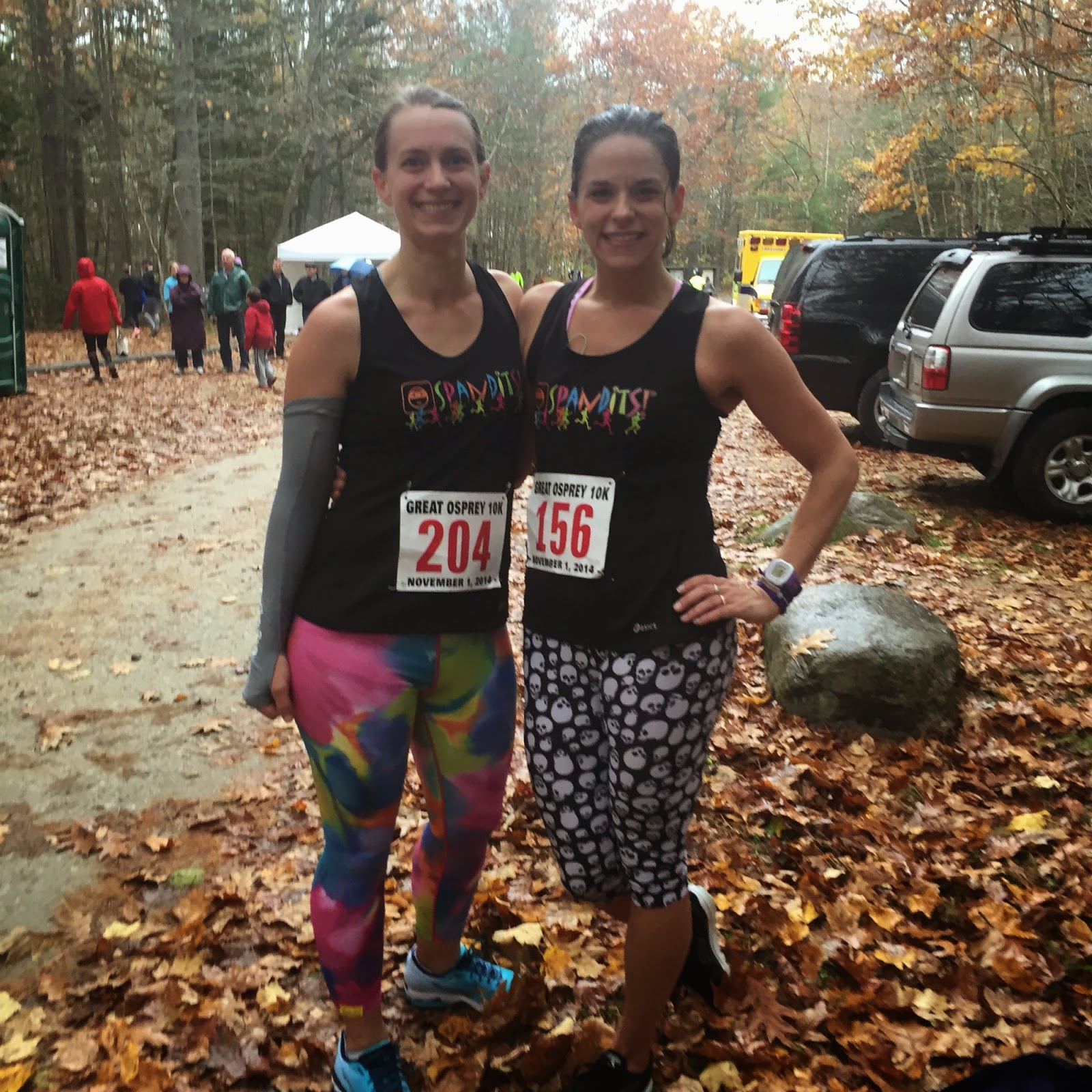 As we headed into the final stretch, Carrie took off and I struggled to keep up.  I wanted to stop.  My lungs hated me.  My legs were pissed.  But I kept going.  Only because there was less than a half mile left.  And then I saw it.  The finish line.  I darted to that glorious spot and wanted to throw myself on the ground.  I was tired.  After Carrie and I congratulated each other, we grabbed some water and decided to start walking back to the car.  On the way back, Ward and Izzy met up with us.  Ward asked if we were staying for the awards and I said "no, why would I?"  That's when he said "there weren't many women in front of the two of you....you might want to stay."   We had no idea!

Carrie and I quickly went back to the car, grabbed our warmer clothing and went back to the award spot...just in time to hear the announcement that I had taken 2nd in the 30-39 Age Group and Carrie came in 1st!   Completely unexpected....but definitely great to hear!

We both accepted our medals, hugged and squealed like high school girls, took some photos...and that was it! 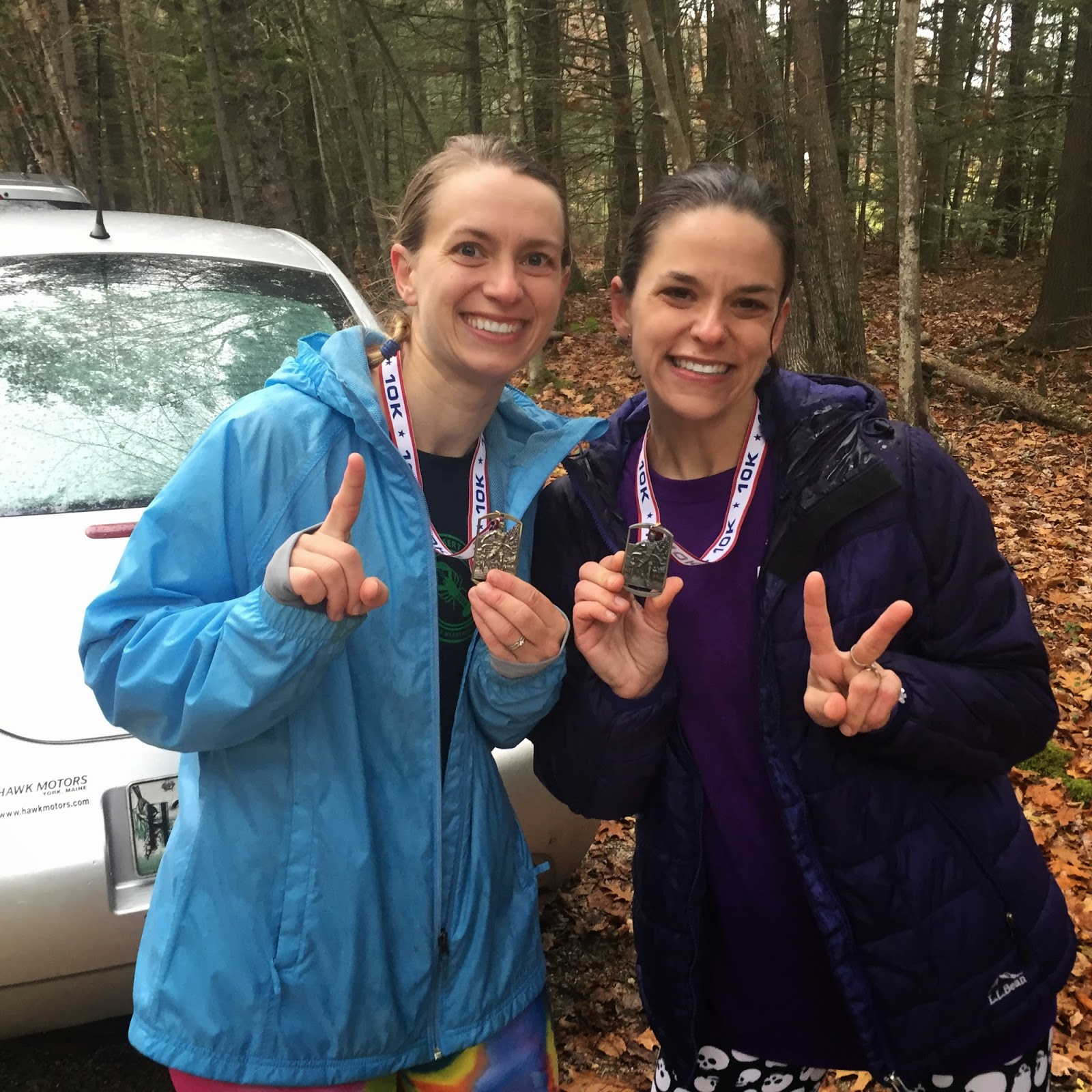