- September 30, 2015
Time is flying by!  I cannot believe September has come to an end already!    How many days until summer break?  Just kidding.  Not really.

I just realized that I have 50 more days until the Philadelphia Gore-Tex Marathon!  I'm working on my goals for this race and I'm seriously hoping it all comes together.  I am not sure I can handle 3 horrible marathon performances in one year.

Training
I'm following the Hanson plan this time around and it's kicking my butt. Just like it did last time when I earned that marathon PR at Sugarloaf. 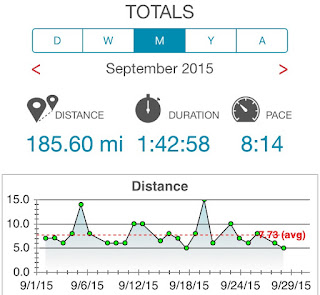 Not my biggest mileage month, but still a solid running month! 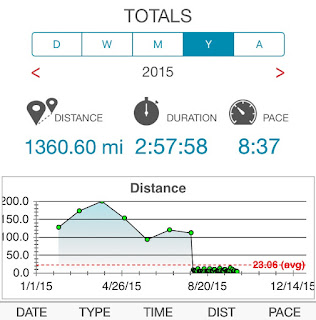 But look at this!  (not the pace...I'm not good at putting in pace each time)  I'm killing my year mileage!  How high do you think I'll go?

Race Weight
I've mentioned here before, I wasn't happy with my weight.  I just kept gaining and gaining and wasn't sure what was going on.  Ward said it was portion control.  But I was eating the same as I was before.  I knew I needed a change.   A co-worker of mine is an Arbonne consultant and was running a 30 day cleanse.... and I knew I needed a change, so I went for it.  No coffee, no dairy, no gluten.... essentially nothing processed.  The coffee was going to be hard, but the other things no so bad.  I started out the cleanse at 145.8 pounds.  I'm happy to report that I have lost 13.4 pounds!  Craziness.  But I'm back to where I felt the best before. 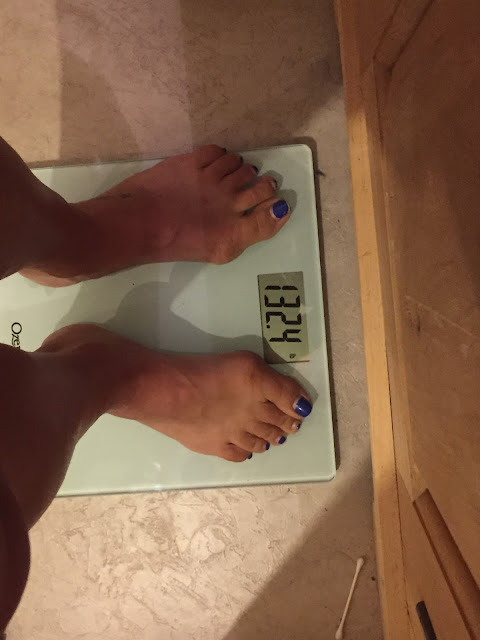 To maintain this, I'm going to do a 80/20 to allow myself some treats here and there, but within reason.  I had 2 Trader Joe's Maple cookies this weekend and I had the worst stomach cramps ever.  It seriously felt like my stomach was tearing itself to pieces.  Crazy!  I guess I need to stay away from those!!! 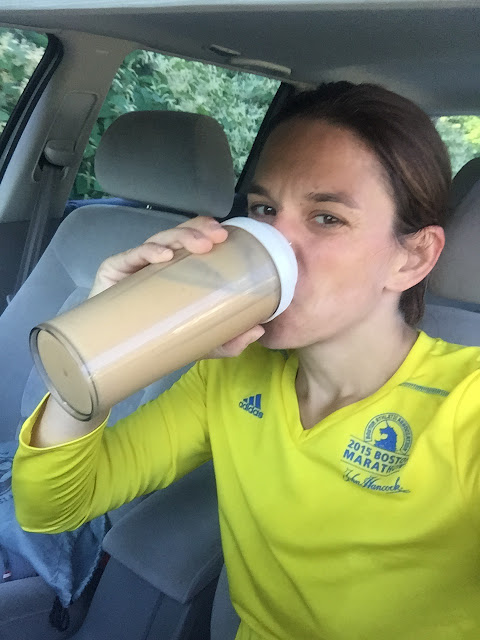 You'll be shocked to hear that I don't really like coffee that much anymore.  I've turned into a green tea junkie, but coffee just doesn't taste right to me anymore.  But I have been mixing some Trader Joe's Cold Brew in my morning Arbonne/Vanilla/Pumpkin smoothies and they are fabulous!  You have to try it!!! 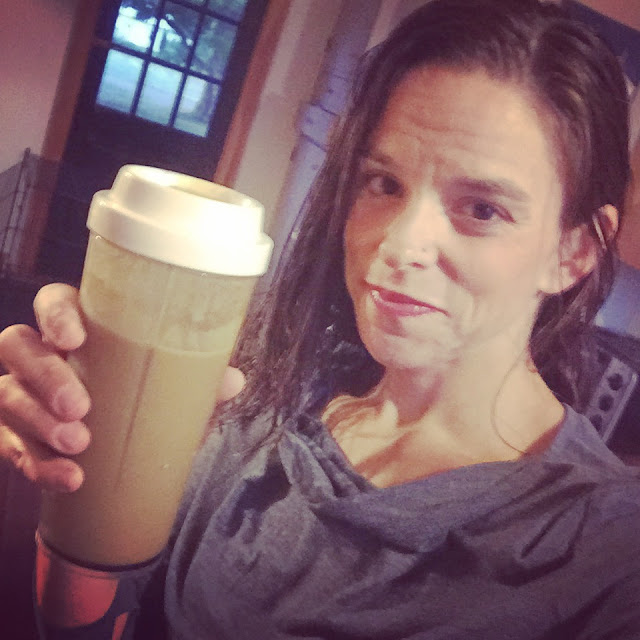 Gear
Training for the Philadelphia Gore-Tex Marathon just got easier with a bunch of new gear that was sent to me by Gore!   I have some super cushy Brooks Gore-Tex Ghost8's to wear, windstopper gloves by Gore, a hat by Gore and a beautiful Gore jacket to get me through those tough snowy/cold days.  I've logged a few miles in the Ghosts and my first thought is "why haven't I tried Ghosts before?"  Seriously!  So much cushion!  I love them! 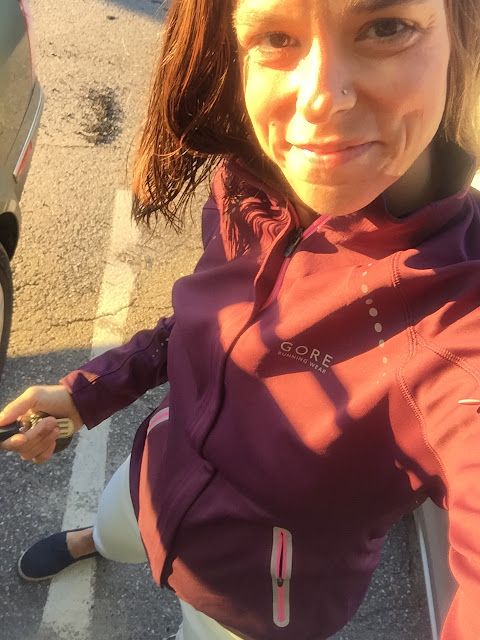 I'm also in love with the jacket.  I've been wearing it as much as possible...to school (because I can) and then to Ward's marathon this past weekend.  The race start was 33F degrees and the jacket felt great!   It's not cold enough for the gloves or hat yet...but they will definitely get a ton of use!

This weekend, I'm heading to Wells for the Rise, Run, Retreat with some super awesome, talented and FAST ladies.  Part of the retreat is to run the Maine Half Marathon.  I'm thinking I'm the slow one in the group...I'm hoping their speed rubs off on me and this weekend's race is successful!  We will see.  Although, I wasn't really planning on racing it. It was going to be a training run.  We'll see how I feel this weekend.  Maybe I'll be inspired by some these women! 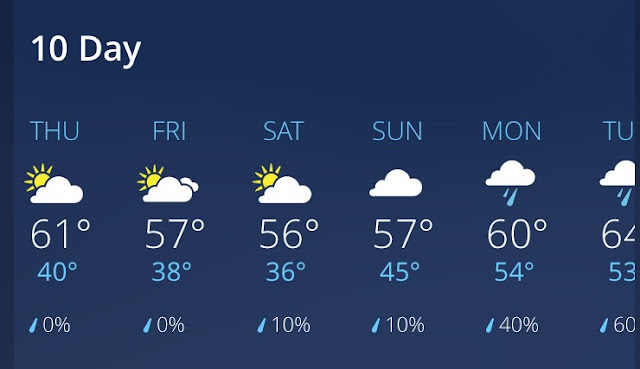 The weather was supposed to be a washout, but it's looking a little different now.  No worries...there's still time and the weather will probably change again.

I don't know what I'm wearing yet...but it will consist of Spandits, ProCompression and Headsweats for sure.

Then I get a 2 week reprieve then it's time for the Runner's World Festival!    Another incredible opportunity!  I don't even know what to expect... except for lots of cool people, running, and selfies.

And fuel....  Have you ever tried Untapped?  Real, pure maple syrup in easy to carry packets.  Oh my word!  I had one as a sample last year and tried it on an 18 mile run.  It was delicious...but I couldn't find it locally anywhere.  Then I saw that an Instagram friend of mine found it at LL Bean!  Since the husband works there, I get a kick butt discount..so I stocked up.  I'm good to go with Untapped now! 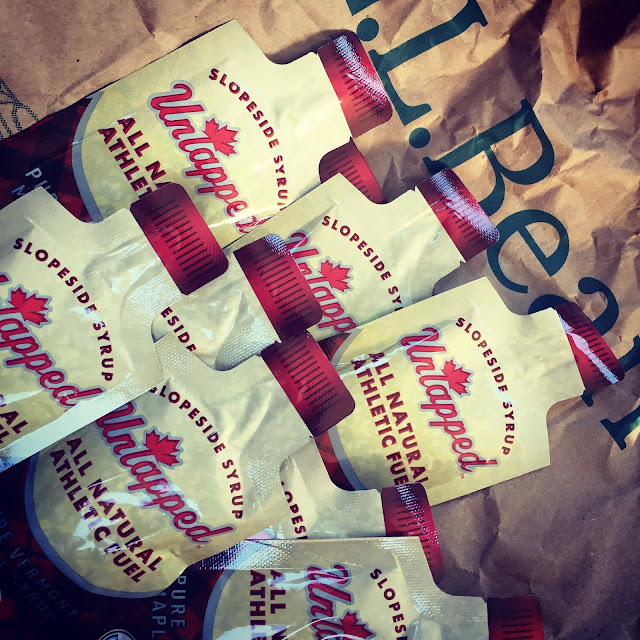 And now that I hydrate with SOS Rehydrate, I actually don't refuel a lot.  SOS Rehydrate is amazing!  Have you tried it yet???   It absorbs immediately and taste delicious.  I have a discount you can use.  AMB-IW6-CWA for 15% 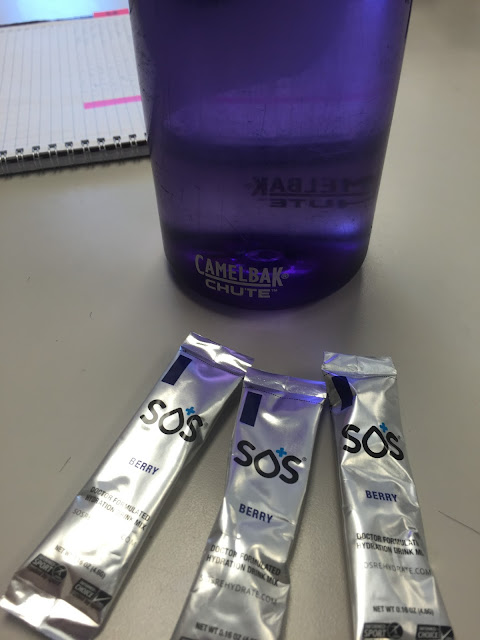 How's your training going?  How was September for you?