- October 09, 2017
The B.A.A. Half has been on my radar for few years.   I decided earlier this year that this year was going to be the year of the half marathon. So I put my name in the lottery.  I had planned on mastering the half this year, so why not run a race I've been wanting to do? 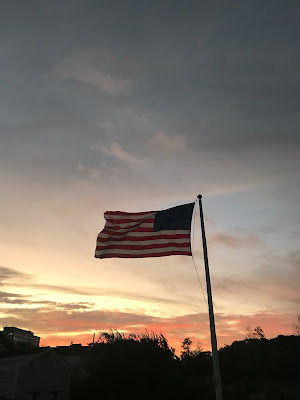 Just before I found out I was running the B.A.A. Half, I had applied to be a Maine Marathon ambassador.   I honestly didn't think I had a chance at getting that cool opportunity.  Little did I know that one day I would find out I was doing the B.A.A. Half and shortly after that I would find out I was an ambassador for the Maine Marathon.     I probably should have looked at the dates for each of them, but really, would I have changed my mind?  Absolutely NOT!    So, now I was running two half marathons in back-to-back weekends! 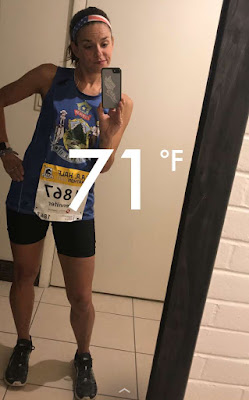 This weekend we decided to not drag the kids all over the place for another weekend, which meant this was just a Jen & Ward trip.    Being the overly wild couple we are, we checked into the hotel around 7:30, and were asleep by 8:30pm.  We are crazy like that. 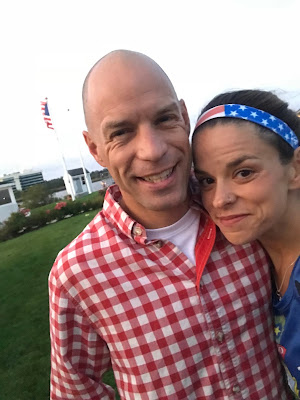 The hotel was only 3.5 miles from Franklin Zoo, and after a lot of stressing and polling everyone I knew about the best race morning way to get there, we decided to just drive there and park where we could.  I was so surprised we found a great parking spot less than a mile from the start!   As soon as we got there, I check my bag and headed out to the porta potty line, with Ward by my side, on his bike.    When I got into line, I had 20 minutes until the start. 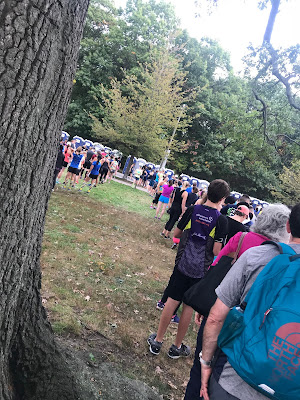 And when I came out of the porta potty, I had a minute until the start.  With nearly 7000 runners, I wasn't going to win (ha!!!) so I didn't feel the need to be in the front, but I didn't want to be in the back either.   So after I gave Ward a kiss, I headed for somewhere in the middle of the pack.   He told me he would see me around mile 3 and I couldn't wait to see him there! 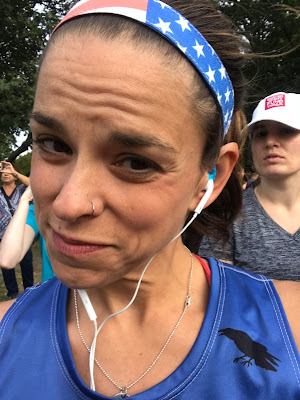 As I neared the starting line, I started to get excited.   But I also felt hot already.  It was already 70F with 80% humidity (or at least that what my Apple Watch told me).    I told myself I wasn't going to let the head or humidity get to me, and was going to have a fun day no matter what. 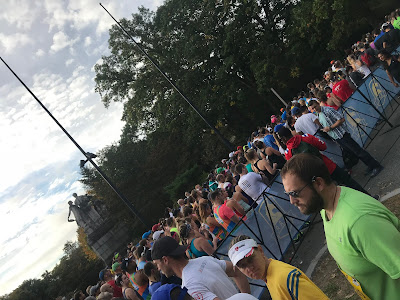 And with that, I went out like I normally start out a race.  Feeling confident.  Feeling happy.  Dodging walkers, left and right.

The course was so much fun!  I loved running through the Emerald Necklace.   Only a few times did I really feel like I was running in the city.   Most of the time we were running along the parks.  There were hills.  But they weren't horrible.  The humidity was horrible.  But the course was not! 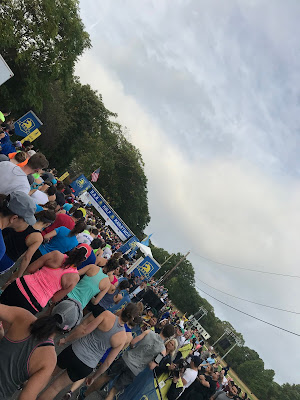 The first 5 miles I felt great.   Well, mostly.  I was drenched in sweat.  I was getting dizzy from time to time.  But it wasn't horrible.   And then BAM!   I seriously hit the wall.  But this wall hurt so bad.  I was dizzy.  So dizzy.  I didn't know what was up.  I had been drinking my SOS and hitting the water stops.   By mile 10 I had to walk.    I wasn't crushing any PRs today, I just needed to finish.  So I walked.  A lot.    The dizziness stopped.  So I started running again.  Well, slogging.   And then I felt dizzy again.  So I walked again. 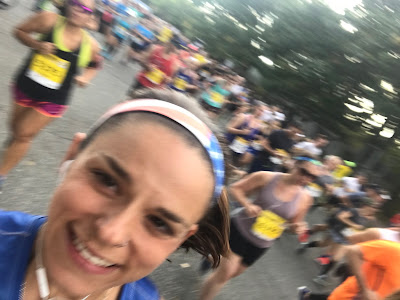 I didn't realize that we were going to run THROUGH the Franklin Zoo, and when we started to enter it, I did get a bit excited!     When I saw some people peel off to the side, I looked to see where they were heading.   A lady said "get your selfie with the giraffe!  They weren't out last year!"  So I did!  It  took a few minutes to defog my phone - through the sweat and drizzle the screen was foggy and I everything I was wearing was soaked with sweat, so I just took the fuzzy, foggy selfie and called it good. 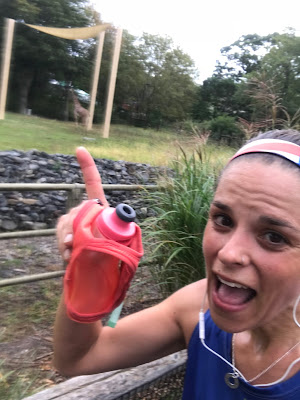 Finally it started to rain.   I usually love running in the rain.  But this time I was a little pissed.  I mean, where was this rain when I needed it at during mile 1 - 12?  It was a little drizzle and I was already soaked with sweat, so really it just rinsed away some of the sweat.  Right?

As I came around the curve to enter White's Stadium I caught a glimpse of Ward off to the side.  And before I knew it, I was on the track, heading toward the finish line. 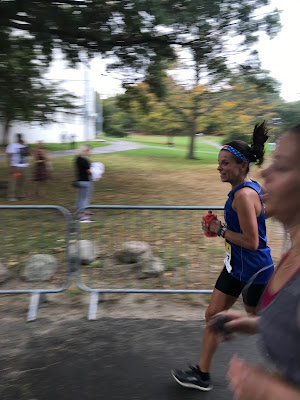 After I finished, I walked through the long line to get my kick ass medal had a few photos taken and then had to take a selfie with my medal. 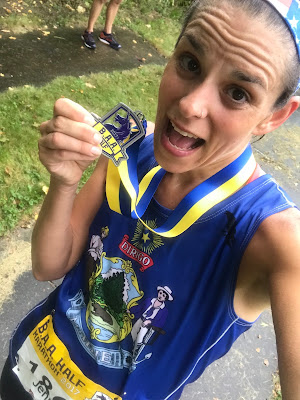 Ward tried calling me a few times but my soaked phone kept cutting out and when it worked, it sounded like he was underwater.   I thought the iPhone 7 was water resistant?   It didn't rain that hard.

Finally I found him.  I got my BAA shirt, picked up my bag and headed to the car.   Thankfully we made it to the car just in time before it really started raining.    I took a few minutes to strip out of my soaked clothing, use a shower wipe to clean up a bit and put on some dry clothes.   All that time I held back my tears from such a horrible race time and just feeling awful.

We went to the Shake Shack on Newbury Street for lunch.  By that point, the tears started to roll.   I felt like a complete failure.  I was so upset with myself and my finishing time.  I told Ward that I felt like something was really wrong with me.  That I was dizzy for most of the race.   The great guy that he is, reminded me about how bad the bronchitis hit me this time.    A good friend then reminded me that "it is only running" and she was right.  It is only running.  There are more important things to worry about.  So, I sipped on my black and white shake (by the way, is freaking amazing) and thought about the good things I have in my life. 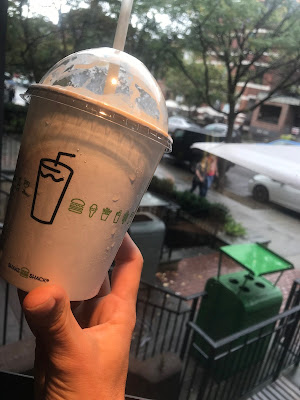 But you know what?  Thinking back.  I was dehydrated.  I didn't realize it but it took me hours to finally pee.  Seriously.  We were at Trader Joes in Portland.   That's a long time.  Especially for me.  Who has to pee every hour or so. 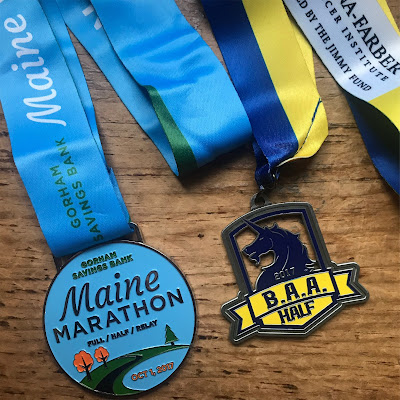 And another thing.  I finished two half marathons in two weeks.  That's a pretty big deal for me.  I've never challenged myself like that before.  I know my race times were not very fast at all.  But I did it!

BAA Half half marathon