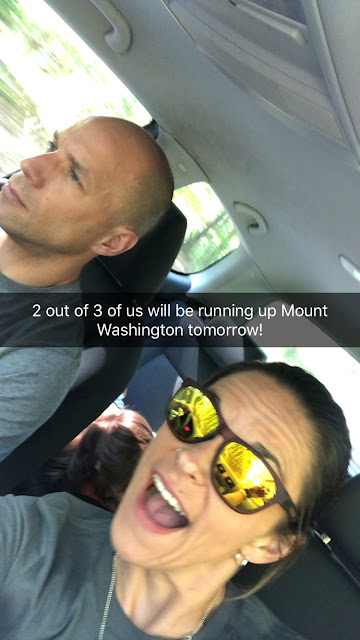 On the way to Mount Washington.  I was the crazy, chatty self that I am.  And Ward was focused a quiet.   I drive him absolutely crazy.  And Tucker is sleeping in the back trying to block me out. PR dinner right here!!!!   Nothing says run fast like a huge burger with an onion ring and fries!  I remember eating something similar just before I ran the MDI Marathon. 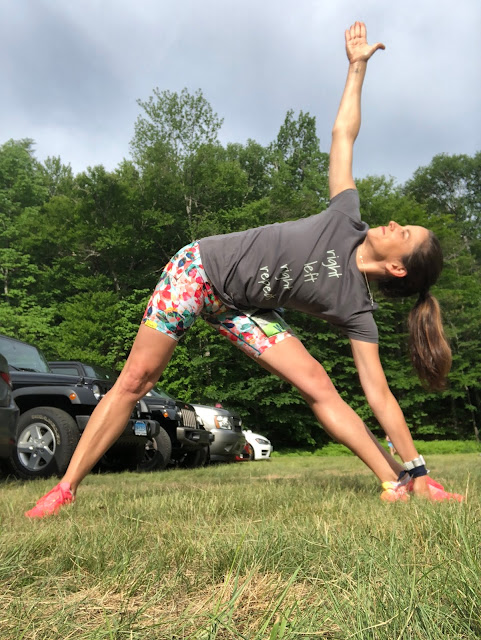 Parking lot yoga on a beautiful day.  I wasn't the only one.  But maybe I was the only one propping my phone against my water bottle to document it. 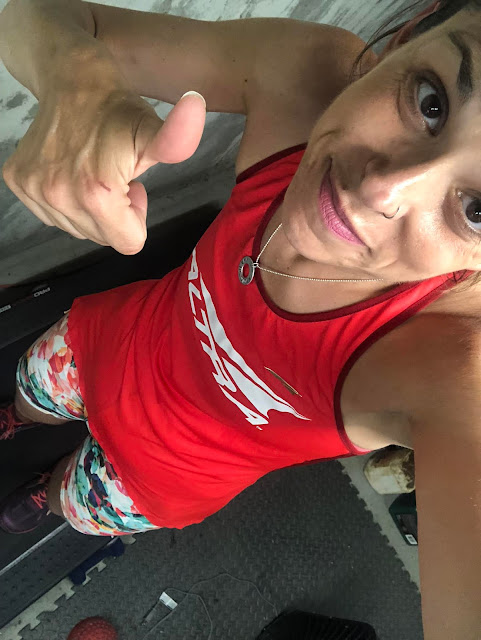 Leading up to the 2018 Mount Washington Road Race, I had severe doubts.  I wasn't sure what to expect with this race.  There are so many factors that go into this race.  The training  and time I put into the prep work, my fitness level, mental/stress levels, and the weather. 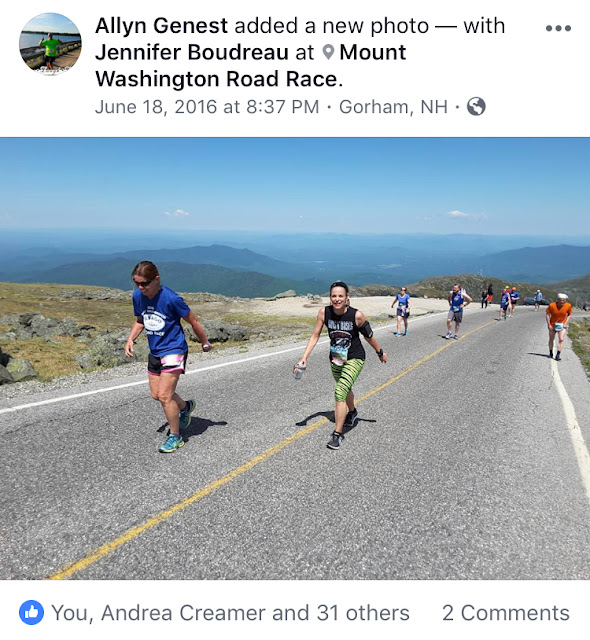 The first time I ran this race was in 2015.  I had just run two marathons back-to-back, which were complete flops.  Super rainy cold Boston Marathon and then crazy hot Maine Coast Marathon.  I had done mostly endurance training with a few hills.   My time was 1:59:39, 24 in my age group, 634 overall.   I was pumped with this.   Sub 2 hours was a huge goal and I did it! 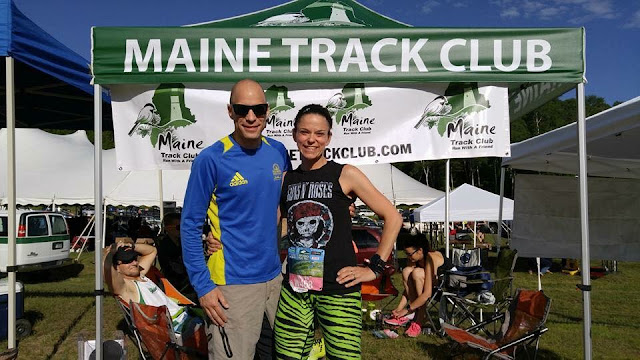 The following year, I ran that rock pile again!   My training was up to half marathon distance and a little more treadmill time.   My time in 2016 was exactly 2:00, 39th in my division, and 635 overall.

Both 2015 & 2016 weather conditions were excellent.  Well.  I mean, warm at the start and warm until I hit tree line and then much cooler as you neared the summit.   I do remember 2016 not being awesome and feeling rather dehydrated at the top. 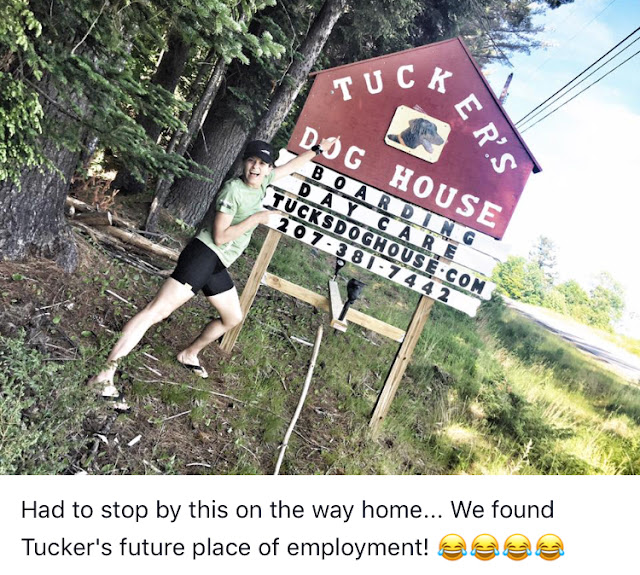 Going into this year's race, I wasn't sure what to expect.  Sugarloaf 15k was not the race I wanted, but Pineland 25k a week later resulted in a 3.5 minute PR.

I had worked my distance up to 16 miles for long runs with a lot of back-to-back workouts.  I also really hit the treadmill incline hard.   There were a ton of days when I would crank the incline to 12% and "run" for as long as I could, then increase the incline to 15% and power walk.  I would go back and forth between those two inclines and then mix in 13%, 14% here and there.   The week before MWRR, I actually decided to do 3 treadmill days in a row, mimicking that workout.  Maybe that helped?  I am not sure. 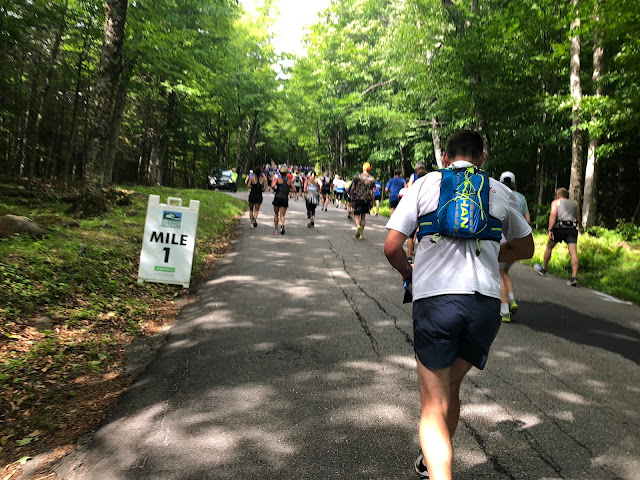 The weather looked like it would be hot at the base and then super windy at the summit.  I was well aware of how cold one gets at the top after running 7.6 miles.  I was also well aware of how my body reacted when I didn't hydrate as much in 2016.  This year I brought my Orange Mud pack and forced myself to take sips of water often, stop at every single water stop, and fill up the water bottle at least one time on the way up.  I also packed 2 packages of Honey Stingers.   I would take one or two gummies out and suck on them slowly.   I trick I picked up from Ward and Wade.
My race plan also included "walk early and often".  Don't run as far as I could until I was absolutely exhausted and couldn't push myself anymore.  I had made that mistake 2x before.   This year I started walking before the race even hit the trees.  I just cranked the music on my trusty little iPod Shuffle and pushed onward and upward, passing people and feeling rather confident.

A friend asked me how much did I really run.  I'm not really sure.  I definitely didn't run 1/2 of the race.  Perhaps closer to 1/3 of it?   And when I walked, I hustled.   I was an arm cranking, power walking fool busting out to my favorite tunes.   And when I passed people walking, it made me feel better and better.

Another plus?  My Apple Watch battery died just moments before the race.  I didn't want to use Strava on my phone because I knew it would drain the battery in such a low cell reception area and I wanted to take photos!  Priorities people.   So I relied on the mile markers and the time on my phone for each mile.  I didn't even try to do stopwatch because I didn't want to be fumbling with that and messing it up.  I just knew the race started at 9, so when I hit mile marker 1 and it was 9:12.  I knew I was somewhere in that range.  Could have been a high 12 or a low 12.  But a good enough estimate.

I think this helped me focus more on how I felt, the temperature, fueling, hydrating, and the terrain rather than focusing on my average pace.   That mental piece really gets to me.   A friend suggested a long time ago to ditch the watch when I race.  She's a smart lady. 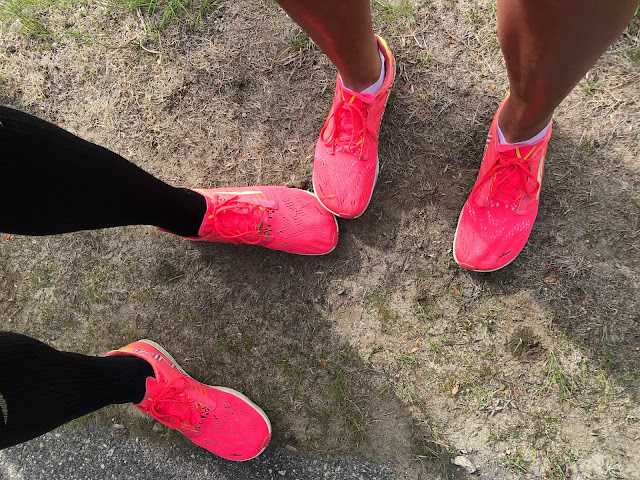 Another thing, I ran in the newest Altra Vanish.  Super light weight.  Almost no cushioning.   And Ward did as well.  Twinning with the husband.  How cute!!!! 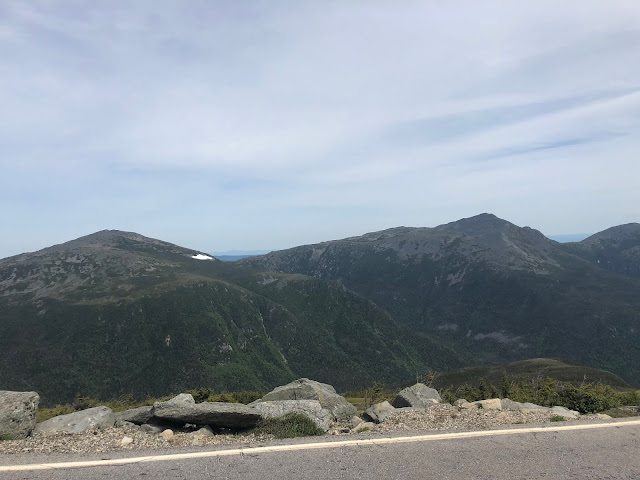 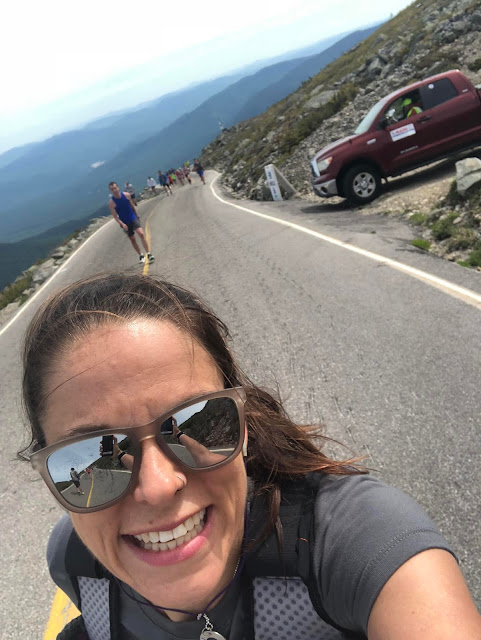 I hadn't lost THAT much time in walking those super steep parts.  This smile says it all.  I'm almost there and unless I fall of the mountain I'm going to PR baby!!!! 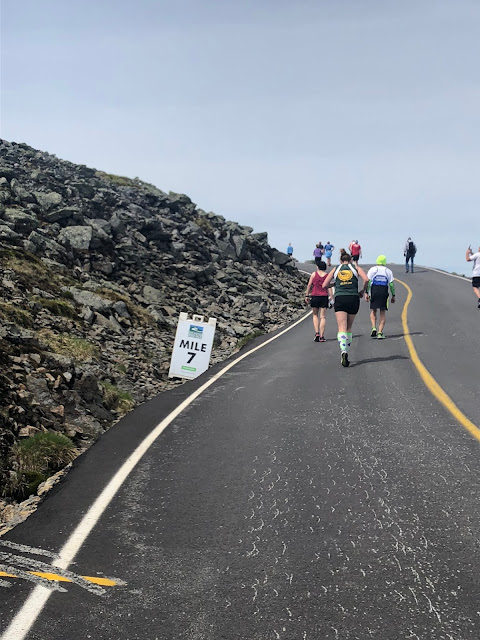 And then I saw my friend Allyn.  And I started yelling for him.  I knew he was going to the race, but was still super surprised to see him where I did.   He captured this kick butt photo of me.  Showing off my newest Spandits boardies and my Right, Left, Right, Repeat shirt I picked up to support my friend Sarah's Tri for A Cure fundraising because she's a freaking rockstar breast cancer survivor! 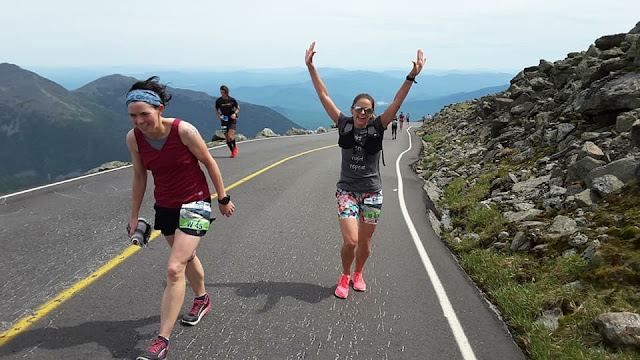 Then I saw Ward and shouted out something about an *&#&#$ huge PR and tried to sprint to the finish line, up that 22% incline.  Okay. I walked. And I'm sure this photographers caught me.  But I did run across the finish line and let the volunteers wrap me in the best purple MWRR blanket ever. 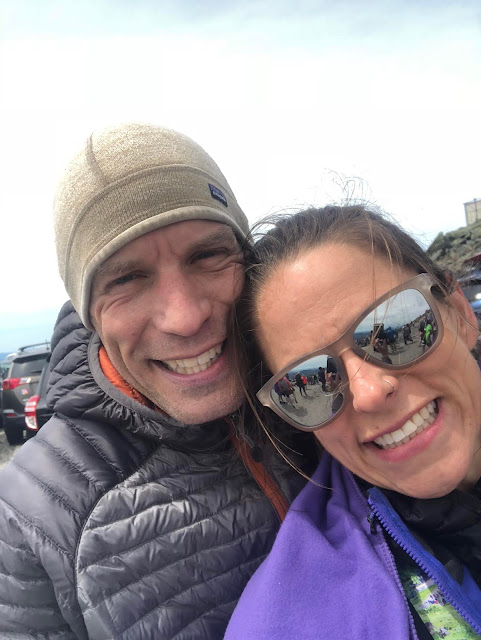 I knew I had pushed hard because it definitely took me a few minutes of standing in one spot to regain my breathing.  I stood in one spot hoping Ward would just come to me because I didn't know which way to go to get to him.  And sure enough, he did.  We were both freezing by this point and set out to find our driver's car.  Thankfully I had learned a few things about the driver down.  Know what the car looks like!   We thankfully found it quickly and they left the doors unlocked.  We didn't know them too well so I wasn't sure if we just open it.  But we did and found our warm stuff. 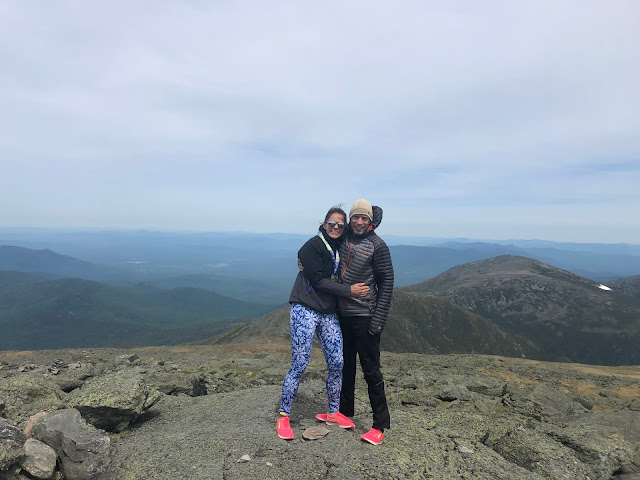 There was no way I was going to wait in that long ass line to get a Mount Washington Summit photo.... so we went to the side and held onto each other so the wind wouldn't toss us off the mountain for this cute one!    Lots of layers here!!!!  I went from Spandits Boardies to Spandits Icelandics (the fleece lined) and a down jacket covered by a wind breaker from LL Bean.  But I still have on my Altra Vanish's!  Love them. 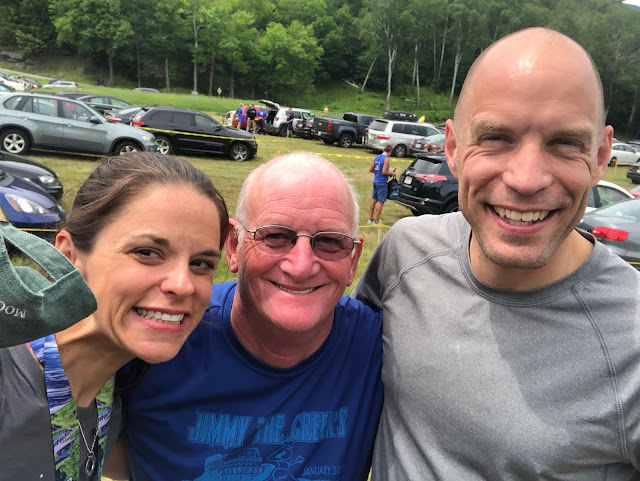 We finally made our way back down the mountain, which to me is tougher than going up!  So nerve-racking!   The turkey dinner was delicious.  And my son, Tucker, was my Maine Track Club volunteer.  He was in charge of handing out the plates.   I was a nervous mom at the top of the mountain hoping he would show up on time.  And he did!!!   Anyway, we sat down and spent a long time with this guy up here.  Allyn.  The nicest guy you'll ever meet.  We are lucky to have Allyn in our lives.  He is always so positive and happy and such an easy person to talk to.   Thank you, Allyn! 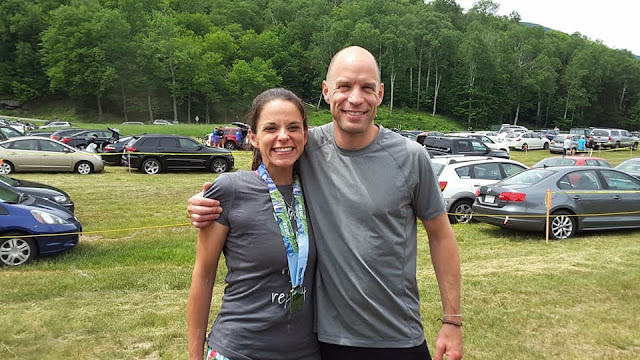 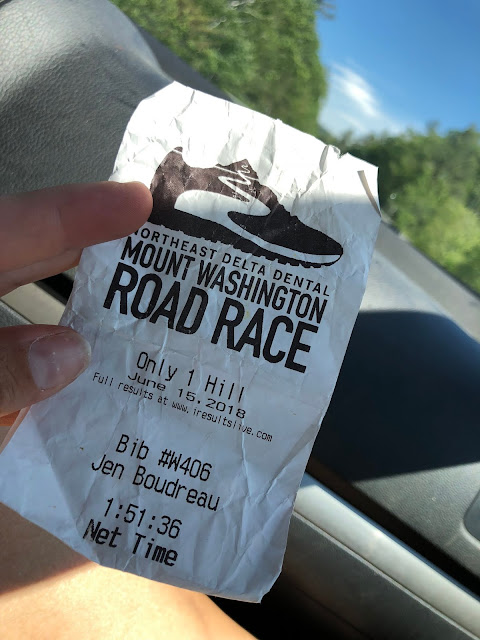 Perhaps a little teary after that huge PR! 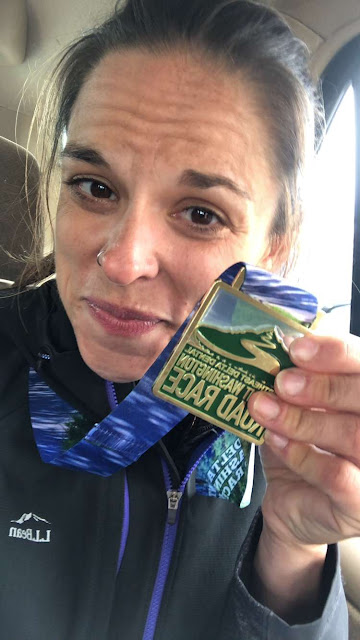 And I was bummed I had gotten a super huge, will never fit me shirt.  But that's okay.   I don't like tech race shirts that much anyway.   I was a fan of the previous cotton ones.  But they always ran small.  So I ordered an XL this time and I failed because the XL tech shirt is like a dress.  Oh well.  I bought the hat to make up for it.  And it rocks.  So there's that. 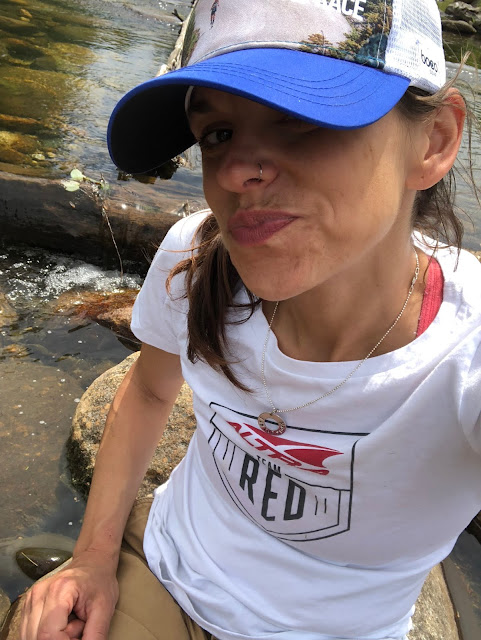