- July 14, 2012
Last summer Ward, Wade and Joe started running the Bond Brook 5K Trail Series.  The races took place on a Thursday night on the trails by the airport in Augusta.  At first, I had zero interest in running the race and thought they were just plain old crazy for doing these races.  But then I took the kids with me one night to spectate and take pictures and my mind was forever changed.  Each week, it was usually the same group of runners.  Sometimes there were some who only came once or twice, but for the most part, the group remained the same.  Watching this group of runners take off into the woods and then crossing the finish line with a mix of exhilaration and pure exhaustion was amazing.  As a runner, it was difficult for me to stand there and watch runners cross the finish line while I stood there with the kids.  I thought that I could at least do my part and take pictures of the runners crossing the finish line and share those pictures online.

This year I was bound and determined to do this 5k that Ward loved so much.  I thought that perhaps he would take the summer off and do kid duty so I could run.  It would only make sense, right?  When both parents run and the kids are still young, finding someone to watch the kids does become challenging.  It’s hard to always ask the same family members over and over again to take the kids.  I suppose we could find a babysitter, but we don’t know any local high schoolers/college kids in our area and I really need to know them and trust them in order to leave my favorite little people in their care.  Ward wasn't up for doing his share of kid duty, which then meant for this run, the kids hung out with their cousins and their Aunt Jill. 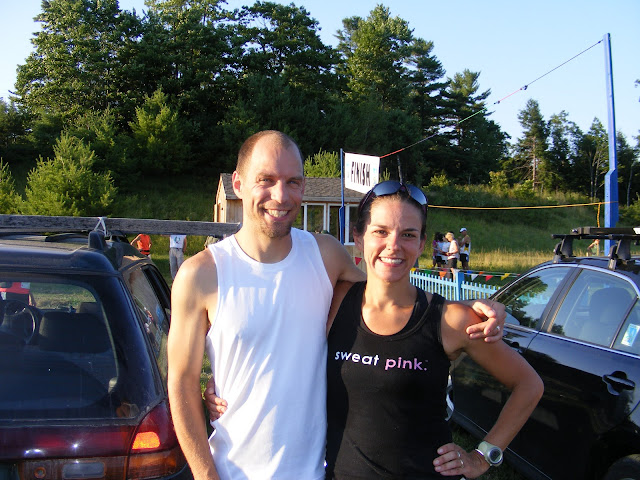 This past Thursday was my first go at trail runner.  Ever.  I know, I write all of the time about running on my favorite Kennebec River Rail Trail, but it’s not a trail, at all.  The rail trail is really a nicely paved, mostly flat course that follows the rail road tracks and the Kennebec River from Gardiner to Augusta. The race directors did offer some trail previews the past few weeks, but I wasn’t available on those nights and really couldn’t make it work.  I was hoping that I would be just fine winging it.  And I was.  I did get a little lost, but it seems as though quite a few others did as well.  No big deal.  I’m thinking (hoping) that getting lost (sometimes) is just part of trail running and adds to the experience.


Ward had tweaked his hamstring the night before at a soccer game and I was really hoping that he would take this race really easy and run with me.  But he wasn’t having that.  Darn.  At least he warmed up with me for about a ¼ mile prior to the run.  I didn’t have to really warm up.  The race was at 6 pm and it was probably 80 F at the start of the race.  My legs were plenty warmed up.


At the start of the race, I saw Harold from A Veteran Runnah, my college friend Dan, Jess and Kim (two of my running buddies), and Tara from Always Under Construction and of course, Joe, Ward and Wade.  The course started off in a different location this year which I loved.   Karen, the race director gave us our directions and rules about the course – mostly watch for the pink markers and that the miles were marked.  Just a few moments later, the race started and I started my Garmin.  I know.  Silly.  Why would I think that my Garmin would do me any good in the woods with all of those sharp turns.  I knew the Garmin wasn’t going to help me with pace or mileage, but at least I would be able to see my time.  At that point, I should have just brought along my old sports watch, but I have no idea where it is.  I started off quite slow and relaxed.  I was going into this “race” with really only one goal – completion.  This was a whole new running experience and I couldn’t (shouldn’t) compare my 5k road race times to this time.


As the runners spread out and found their paces, I started following a group of women.  I kept up with them for some time, then the course got rather windy and I completely lost them.  Apparently I wasn’t paying attention to the pink markers either because I soon found myself on a paved road.  Ugh!  I ran back toward where I thought the course was, but I have zero sense of direction and I was really getting nervous I wasn’t going to find the course again.  Great.  I kept running to where I thought I had lost the trail – thinking this is just awesome.  They will have to send out a search team for me.  How freaking awesome is that.  Soon enough I found some runners who I had passed earlier in the race.  Then I saw Jess and another group of runners bushwacking through the woods because they had gotten lost too!  Jess and I stuck together for the rest of the race.  We passed the runners we had passed earlier and just did our best to survive for the rest of the race.  My finish time was 32:16. (a little more than 10 minutes added on to my 5k pr on a flat, paved road.  I lived to tell about it and I’m going to do it again.
After the race, I went out for a cool down with Ward and Wade because they (like every single race they run) decided to toss their hats and sunglasses during the race.


My overall impression of the course – it was a challenge for sure and that’s what I wanted.  There were lots of roots, trees, rocks, narrow paths.  I really don’t remember looking up a lot.  My focus was really on the course trying to make sure I didn’t fall and really injure myself. Next time I’ll add paying better attention to the pink markers as well.  That should have probably been my priority the first time around.    That would definitely put a huge kink into my marathon training.   I need hills in my training (since I will be running up a mountain), so this will provide me with part of that training.


If you live in the Augusta, Maine area, and are up for a challenging run, I think you really should come out to the series.  Each race only costs $5 and it benefits the Augusta Trails.  You can like them on facebook,(by the way I LOVE their cover page, especially that hottie in the yellow shirt) or check out their website.
5K Bond Brook trail running Wade Ward