- August 25, 2013
Friday afternoon the kids and I headed down to Brunswick to pick up our Color Me Rad packets.  We quickly got our bib numbers and shirts and were on our way.   The crew at packet pick up was incredibly nice and efficient! 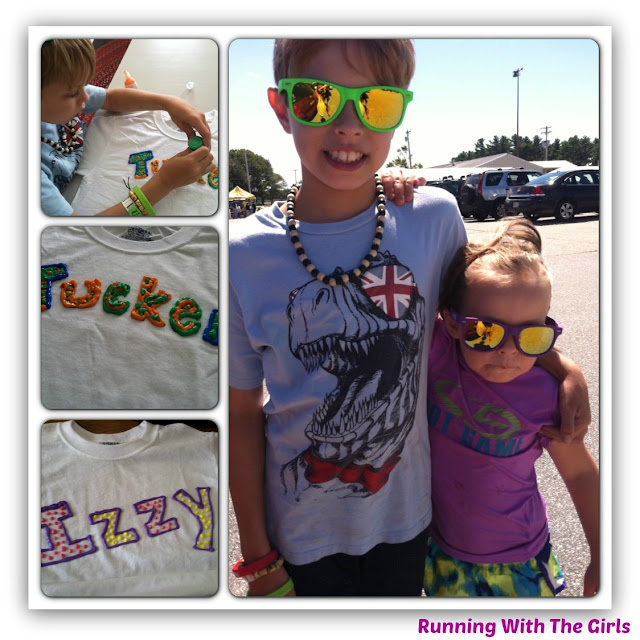 Before heading home, we stopped by the craft store and picked up some white t-shirts and puffy paint so we could make our race shirts.    The kids love their personalized shirts!  Now I need to head out of the store today to get some spray with hopes to preserve the color bombs on the shirts - as they are both in love with their colorful shirts. 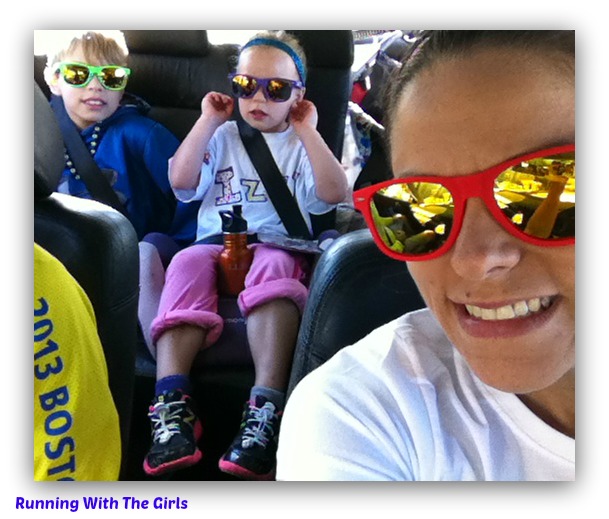 We left bright and early Saturday morning and ready for a great day at Color Me Rad with our new, cool glasses! 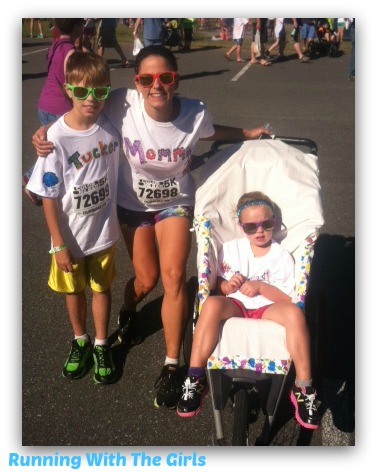 I opted to cover the jogger with a white sheet and fun color splat duct tape.  Not to protect the jogger - I'm not worried about it.  It's red and the color bombs would easily wash off.  But to get more color on it! 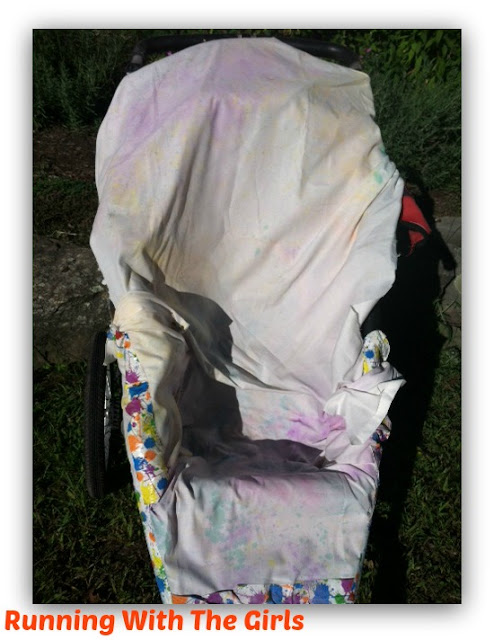 But what I didn't take into was when I taped on the sheet at home, it meant I wouldn't be able to fold up the jogger!  Thank goodness we were able to put one of the seats down in the car, cram the kids closer together, and shove the jogger in there unfolded.  I love my wagon. 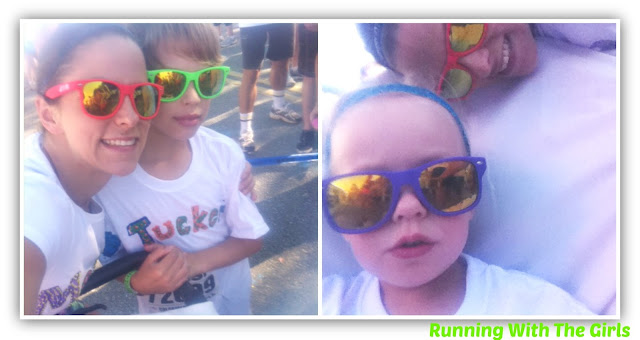 We got there earlier than our scheduled wave, but we headed over to the starting line anyway.  As we arrived, the announcer was saying they were doing waves every 5 minutes and to just jump in to any wave you wanted.  Nice!  Since I had the jogger, I wanted to be nice and stay in the back. 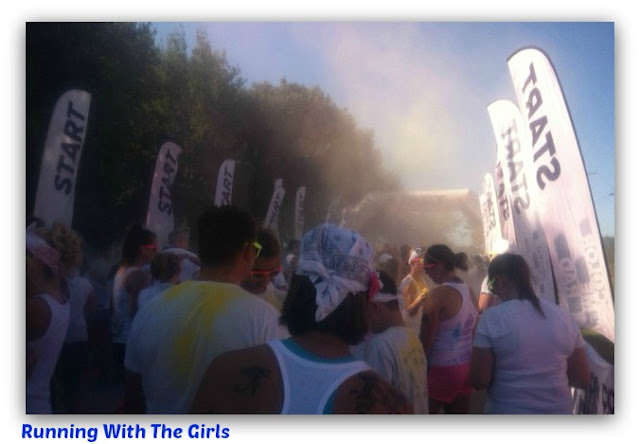 We only stood in the starting shoot for a few minutes before the wave started.  The music was blasting, color was flying around and there was lots of energy.   Lots of fun! 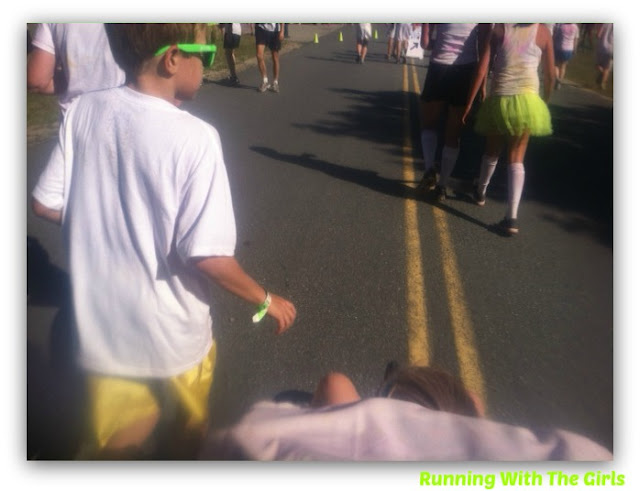 I wanted to bring my phone along to take pictures, so I put it in a baggie.  It was great having it with us!           As we headed out along the course, you could see the color stations coming up.  Tucker would dart away from me and try to get as much color as possible.  When I came through the color stations with Izzy, the color crew was so gentle with her.  They would get down low and do a little puff of color on her.  That part was incredibly sweet.  Especially since Izzy is a bit on the timid side, I was nervous if this would be too much for her.  But their approach was perfect for her and she really seemed to have a great time! 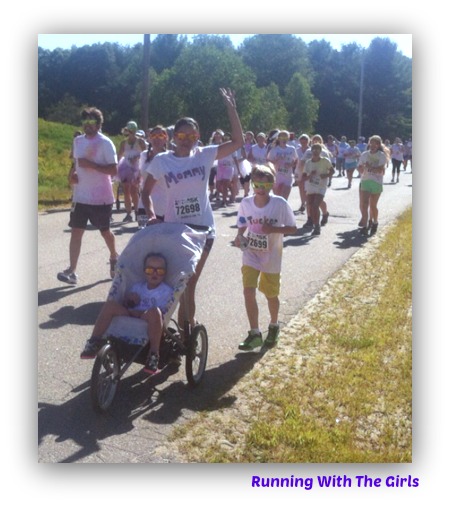 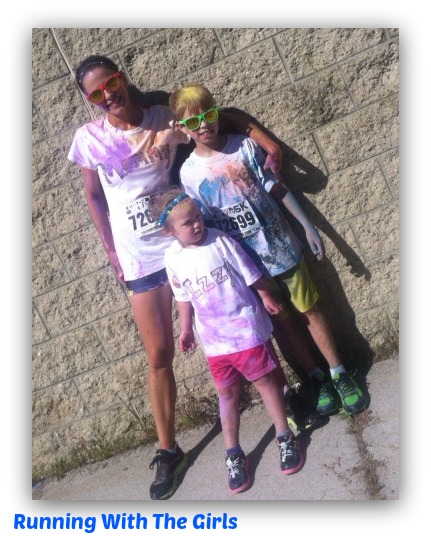 After we crossed the finish line, Ward found us immediately.  We took a few pictures and then we had to quickly get out of there because Tucker had a soccer game to get to!   Sadly we didn't a chance to really walk around to see all there was because we were short on time.  It looked like there was so much fun to be had. 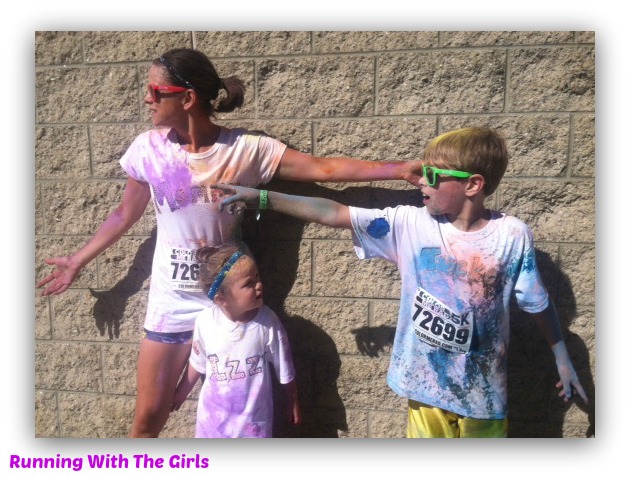 What I loved:
- The music was fun and upbeat.  It definitely made for a great atmosphere!
- Fun runs are great.  Being an untimed, fun event, it opens up the field for so many more people to be active.  This is an event for all abilities and ages.  It's all about fun.  If you have fun, you won the race.
- The wave flexibility was nice.  Being able to start earlier was a nice touch.  And having waves every 5 minutes helped quite a bit with the huge crowd.
- The venue is a great place for races, especially large races like this one.  There's plenty of space and lots of opportunity and options for courses.  This is a plus.
- The Color Bomb folks were super gentle with Izzy in getting color on her.  HUGE plus!  Very kid friendly!
- All of the race volunteers were incredibly helpful and upbeat.  Trust me, this makes a huge difference at a race.
- Even though traffic was an issue, parking was NOT an issue.  The parking crew was incredibly efficient and helpful.  We got to park super close to the race start.

- At packet pick up, there was a special sale for kid registration - which included a kid sized shirt, RAD socks, and extra color bombs for $15.    I wasn't very impressed with this since I had paid $55 (plus processing) for Tucker weeks ago.  However, the awesome people at ColorMe Rad heard my complaint and are making it good.  Tucker will be getting his kid pack in the mail shortly!  Thank you!
- Kids under 7 are free.  This is a nice touch!  Izzy didn't get a shirt or glasses (I gave her mine) but she was free.  Plus I was buying white shirts anyway, so the race shirt didn't matter for her anyway.
- The race shirt given out is really nice.  I love how soft it is and that it's fitted.  This is one race shirt I will definitely wear.   I'm glad I sized up though because they do run small.  Sadly, I have friends who received shirts that are far too small for them.  I feel badly that they won't be able to wear their shirts. 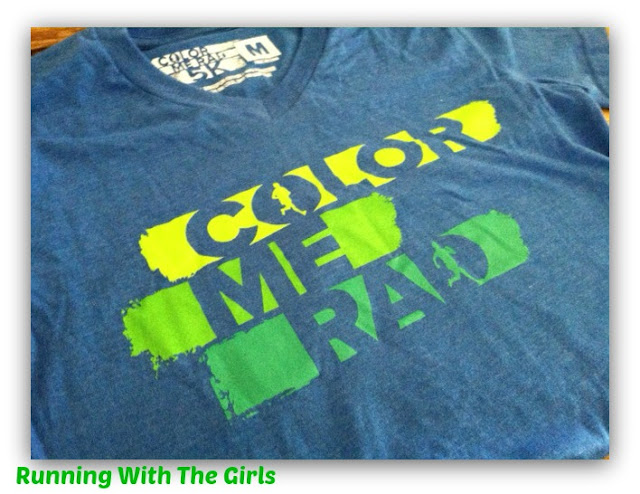 What I didn't love:
- The traffic issue.  Brunswick Landing is a large venue; however, getting into Brunswick Landing easily gets congested and when thousands of people are heading in there, traffic was backed up for miles.  We were about 10 miles away when we were stopped.  And when we only moved 10 feet in 10 minutes, I knew we were going to be screwed.  Thankfully I know my way around Brunswick and were able to get out of the line and we took another route and were able to get into the venue in a lot less time and with hardly any traffic.  My suggestion is that next year there should be shuttles getting racers and spectators into the venue.   Or even open up the other entrances into Brunswick Landing!
- The guy at the color bomb tent didn't believe me that I was a Color Me Rad ambassador, which entitled me to additional color.   I even showed him the proof (my blog printout).