- October 21, 2013
This past weekend the girls and I had a girls weekend in Bar Harbor.    We haven't had a getaway like this before, but I see there are definitely going to be more! 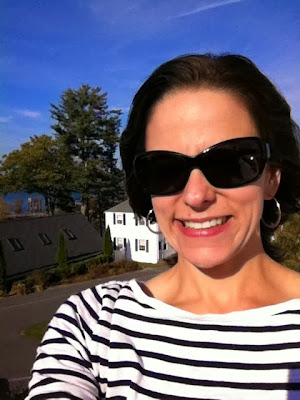 Gorgeous sunny, perfect day.  Just like MDI Marathon weekend last year.  The day before was absolutely gorgeous.  And then it rained for the entire 26.2 miles. 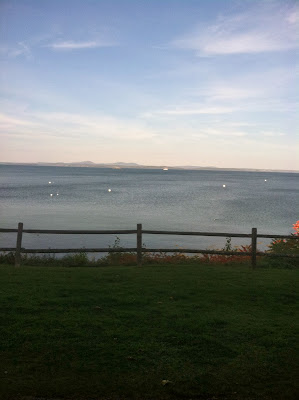 This was our view from our room.  Absolutely perfect!  Look at what we can afford when the family doesn't join us and we're splitting a room 4-ways.

After checking in, we went in town to do some get some coffee, do some shopping, and then dinner.   Before dinner, we had to check out the starting line and do the foot shot.

Then it was time for dinner.  We chose Paddy's, a great pub by the water.  The food was absolutely delicious, and the company was fabulous! 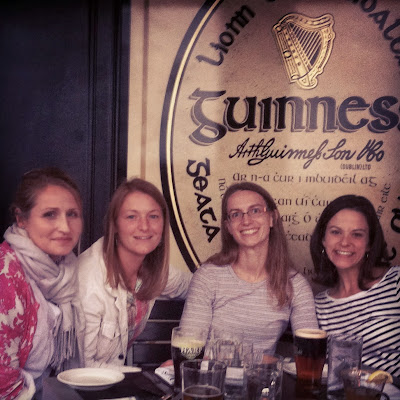 The next morning, we had one of the best continental breakfasts ever.  It was loaded with the perfect pre-race choices - bagels, peanut butter, bananas.  Of course there was more, but I only focused on these runner friendly choices.  Then we checked out and headed in town for the race. 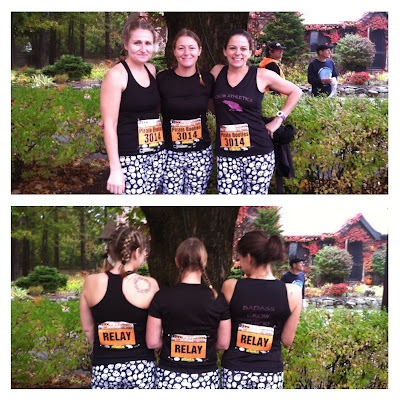 We were quite early, but that was perfect.  It gave us plenty of time to see the early starters head out then three guys who were taking on the course on their longboards.  I have no idea how they did, but I thought was pretty cool.    I cannot imagine taking on those final hills on a long board.  Correction, I cannot imagine doing anything on a longboard!

We were getting quite a bit of attention already with our fantastic Spandits capris.  We were definitely a hit!  Well, our pants were anyway!

While we were waiting for the start, Carrie spotted Jamie, her husband, Mike, Sara, Eric, and Crystal.  This was our first time meeting Jamie and Mike.  She is just as sweet in person! 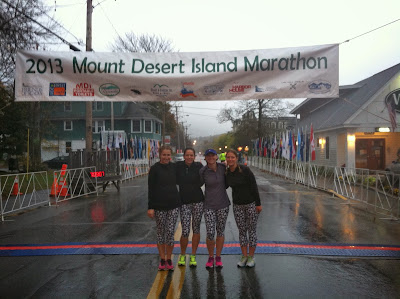 We found a kind soul and asked him to our picture.  His name is Ryan.  And poor, poor Ryan.  He had his skull print cheering crew at every relay exchange.  He probably thought we were stalking him.  Sorry Ryan!

Just as predicted, it was raining a little bit at the start.   The forecast called for it to clear out, but I was still nervous it was going to be a rainy day.  Thankfully, my fears came to an end.   One last photo op with our marathoner - Carrie.


Just a few minutes before the start, Jill (lucky leg #1) and Carrie lined up at the starting line while Stacy and I got in position to cheer on the runners.  The race directors put together a great start to the race.  There was a special tribute for those affected by the tragedy that took place at the Boston Marathon.  Shortly after that, AC/DC started blaring from the speakers and then the horn sounded and the runners were off.  I apologize for the obnoxious cheering.  But I had to share my video of the start.

Just after the girls ran past us, Stacy and I went straight to the car so we could head off to the first exchange point.  The directions were slightly confusing, so we may have gotten off track a little, but we still made it there in plenty of time.  We were able to see the front runners.  It was pretty amazing to see all of the speedy marathoners.  At this point, I got to finally meet Jamie.  I've never really met her in person, although I've seen her in passing at other races.

Then we saw one of the best signs.  I do love marathon signs.  We didn't wait too long and then we spotted Carrie and Jill coming along.  They were super easy to spot given the best pants ever!  Not too long after that, Stacy jumped in the race and then she was off with Carrie.   Jill and I got the car quickly and started off to the next exchange.  This time, it was super tricky getting there.  Eventually we found our way (through the assistance of some nice spectators who I decided to follow), we got there.

Jill and I had a great time at this exchange, cheering on the marathoners.  I love it when race bibs have names on the front, so you can cheer people on.

Then, because our pants rock and people noticed them, marathoners started telling us that "our girls" were on the way.  I love a warning to get ready.  Soon enough, the girls were spotted, so I handed my jacket and water bottle off to Jill and headed to the exchange spot.  When Stacy arrived, I gave her a hug and Carrie and I were on our way.

I must add, my leg is where the big hills really start.  Carrie was quite tired by this point and started to not feel well.  I felt so bad for her.  I wanted her to have a kick ass race and wanted to push her hard, but she didn't look very good at all.  At this point, it was my goal to get her to the finish with a smile.  So we did a lot of run/walk combos.  Which was perfect.  It got her to the finish, with a smile.  I wouldn't have wanted it any other way.


We did see a friend of mine at one point so she took this picture of us and posted it on facebook.  I love seeing familiar faces along the course.  It always makes the race seem better. 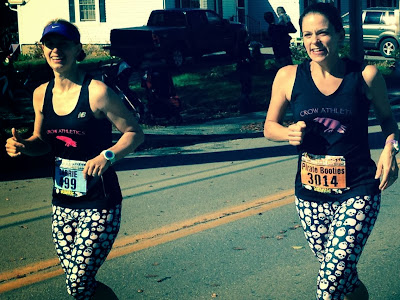 As Carrie and I neared the finish line, her pace picked up and she was smiling.  Jill snapped this picture of us before she and Stacy joined me finish as a team, while Carrie took the lead to capture her marathon completion moment. 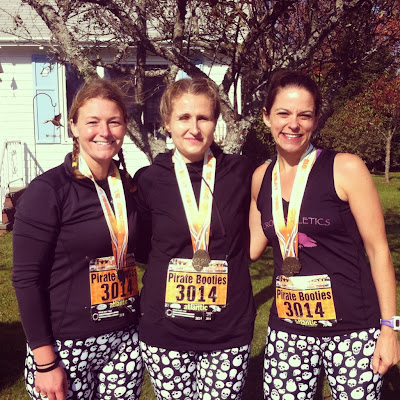 We gathered our medals, exchanged some emotional hugs, then headed off for some food.  However, it was a bit disappointing we couldn't find it at all.  There was a table with paper cups filled with water and gatorade and a milk table, but that's all we saw.  We saw a sign for the beer/soda and followed it, but never found where it was.  We didn't even see any post-race snacks.   That part was a bit frustrating and we were starving so we quickly went back to Bar Harbor for a late lunch. 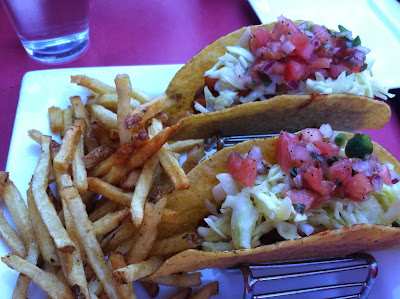 The girls each had their own custom pizzas and they all looked delicious.  I wanted pizza so bad, but the pulled pork tacos with duck fat fries were really calling my name.  And they did not disappoint! 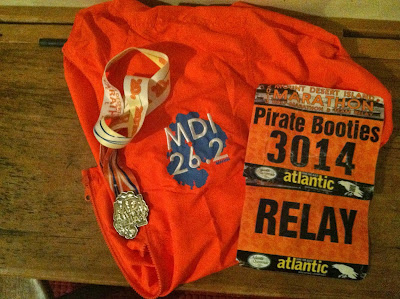 Overall, it was a perfect weekend with the girls.  We had a blast hanging out, shopping, eating out, and running together.  They are the bestest friends I could ever have and I am so lucky to have them.